Will the carboxylate groups of the citrate anion undergo hydrogen bonding?

The citrate anion of trisodium citrate has three carboxylate groups. I am concerned with whether or not there will be hydrogen bonding in water, with hydroxyl groups of other ions or alcohols. 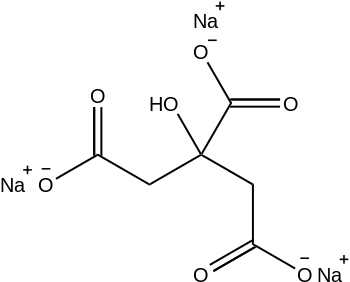 My question is: will the citrate anion hydrogen bond with other molecules or polymers with hydroxyl groups, in aqueous solution?

It has been made aware to me that there is an article that has done research to show that carboxylates are strong hydrogen bond acceptors in anhydrous solvents.

As the comments indicate, you don't need a formal charge on oxygen at all. "Neutral" oxygen atoms are usually negatively charged anyway just from bond polarity, as in water. That and the lone pairs on oxygen are quite enough to enable hydrogen bonds to protic hydrogen.

Not the answer you're looking for? Browse other questions tagged inorganic-chemistry aqueous-solution resonance hydrogen-bond or ask your own question.