Is a beaker/reaction vessel like the one pictured available commercially?

We're doing photocatalysis with the catalyst fixed to a 2" Si wafer, washing an aqueous solution (methylene blue, the concentration varies but in the picture I believe it's 0.1 mMol/l) over the top in beakers that look like this 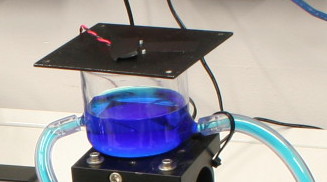 (the lid is the heatsink for the 365 nm UV LED that drives the reaction; that part is pretty much optimised).

The few we have are custom made, and we need some more. I can't find a source of anything comparable, but I'm only a physicist who doesn't necessarily know what's available or what terms to search for.

It needs two hose barbs as near the bottom as possible, and a flat base wide enough to lift a 2" wafer out (i.e. about a 60 mm minimum internal diameter).

They're also visible in this timelapse video of the reaction.

If such a thing exists, what's it called? Or is there something we could repurpose? Both the cost and the lead time of custom glassware are a bit high.

A beaker / reactor of such type would be rather expensive as well. If design and elegance do not matter you can easily adapt every suitably sized beaker by holding two pipes at the levels at which the hose barbs are supposed to be. Perhaps you choose a beaker a bit wider so there will be no turbulence or differences of sort as compared to what you are using.

Any flask or other container, combined with two small tubes and a couple of stands will effectively let you save money and time. Perhaps you must get space for the inlet and outlet through the led holder lid.

I don't think these are UV LED. Most likely vanilla blue LED. You can buy strips of blue LED light and wrap it around a 500 mL beaker. Run your reaction in a second vessel inside that larger beaker. or else, you can use a aluminium sheet, cut vertical perforations and wrap the LED strips around it. Place the photocage around your reaction vessel.

Not the answer you're looking for? Browse other questions tagged equipment or ask your own question.

1
Stirring the reaction between hydrochloric acid and a powdered substance
4
Preparing an inert atmosphere reaction vessel with only an input?
0
What is the name of this 3 open tube and where can I purchase one?