Acetic acid odor while testing CO2 sensor; can it be easily removed, is there a better way?

A friend asked me to help test a hobby-quality $\ce{CO2}$ sensor MG-811 (updated link). It uses a solid electrolyte and should provide a sensitivity of something like -40 mV per decade. I though I'd just use a small amount of acetic acid + baking soda to make roughly 4,000 ppm in a large container, and compare to "fresh air" which should be roughly 400 ppm, or at least within the 350 to 600 ppm range, as a very rough initial test.

But then I noticed/remembered (duh!) that the acid smells quite strong. Are these simply molecules of $\ce{CH3COOH}$ that are evaporating, or are they bringing along molecules of water in some kind of cluster?

I realized that they could potentially contaminate the sensor, so I'd like to know what I'm up against in terms of removing them from the gas before immersing the sensor.

I've tried to look up the vapor pressure of acetic acid, and it seems to be quite large, about 10 Torr at 20C. See for example here and here. So I'm thinking of using some kind of ad-hoc cold-trap to try to remove it. Might there be another way to do this without using special laboratory equipment? Would passing the gas over dry $\ce{NaHCO3}$ or a solution of it help to "getter" the remaining acetic acid vapor?

Or, is there a better way to produce a controlled amount of $\ce{CO2}$ to begin with? 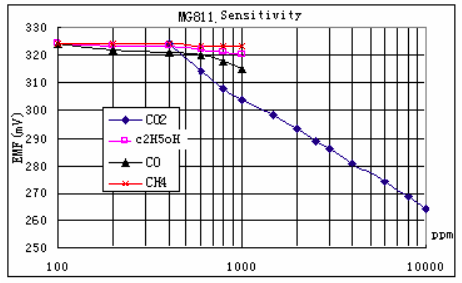 You could use a less volatile acid, like oxalic. But I think the reaction with NaHCO3 probably gives off a mist as the reaction bubbles, and that might be why the odor is so strong.

How about using seltzer water (or Perrier? or Diet Coke!) as the source of CO2? I estimate that the pressure of CO2 is about 45 psi in the unopened bottle, and if you attach a balloon to a freshly opened bottle and let it outgas slowly, the balloon will fill up and be essentially pure CO2. If a latex balloon is unsuitable or too hard to handle, a mylar balloon ($1 at the Dollar Store) will work just as well. The gas will be saturated with water vapor.

Not the answer you're looking for? Browse other questions tagged everyday-chemistry vapor-pressure or ask your own question.

20
How would I measure the Carbon Dioxide content in Coca Cola over a period of time?
6
How is the yield of a complex organic synthesis defined?