I have quite a bit of difficulty in explaining sigmatropic rearrangement reactions. Consider the following reaction:

How do I explain the formation of the shown product? When simply moving the electron pair in my head, I come to the other enantiomer, where the $\ce{-CH3}$ group shows in our direction.

I've repeated all my notes on sigmatropic rearrangements but unfortunately, I don't get it. I suppose that I should treat this like an alkyl migration. The latter should happen over a suprafacial intermediate state as we have an uneven number of electron pairs (1) and we have thermal conditions. This results in a suprafacial reaction. Knowing this, I went on and added the HOMO and LUMO orbitals and postulated intermediate steps. Note: Yes, I am aware, that pericyclic reactions happen in a concerted fashion, but somehow I need to see, why the groups on the bridging carbon have this conformation. 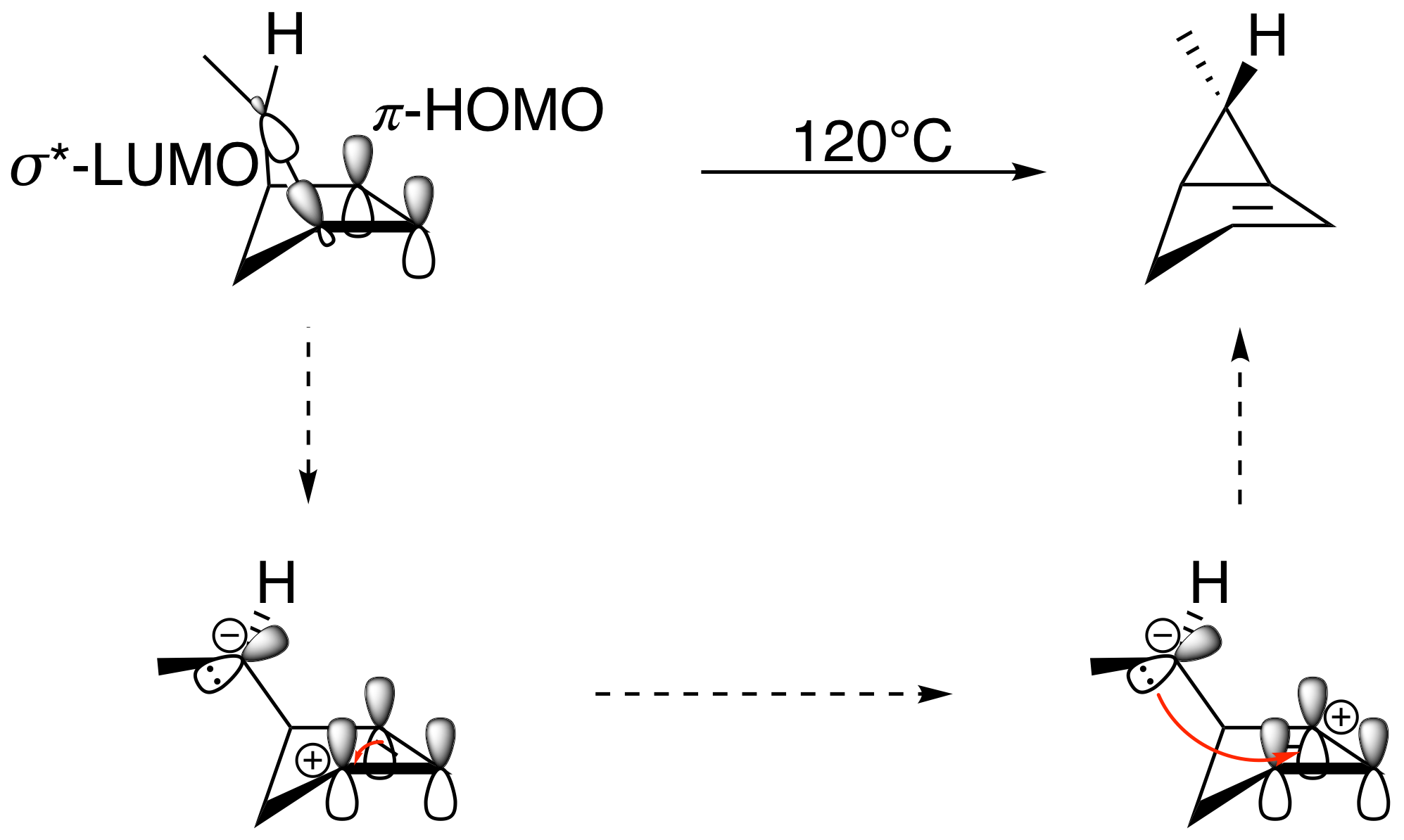 Is my proposed explanation okay? If not, please provide some information. I really have trouble with this kind of reactions.

The analysis you have drawn is somewhat similar to a Fukui frontier molecular orbital analysis. In that picture, for a reaction to be thermally allowed, you need to check for constructive bonding overlap between the HOMO and the LUMO, within geometrical reason. This is achieved by connecting lobes of "like" shading: i.e. shaded lobe with shaded lobe, and unshaded with unshaded.

You don't necessarily have to draw it stepwise (although I gather it's your own way of doing it). You can simply draw both interactions in the starting material, like this. The bottom interaction is not an issue. The top interaction, however, is an issue. 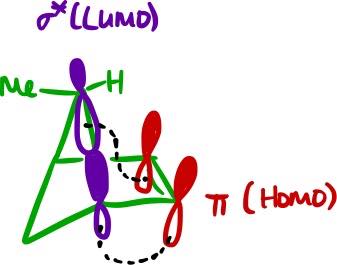 Problem #2 is that you tried to connect the large unshaded lobe of the σ* orbital with the white lobe of the π orbital. That is not geometrically reasonable: if you connect these two lobes, then you need to somehow end up with the new σ bond being formed underneath the ring. In other words, you would have to have an antarafacial migration of the alkyl group.

[Note that this has a different meaning from the suprafacial or antarafacial components in a Woodward–Hoffmann analysis.] 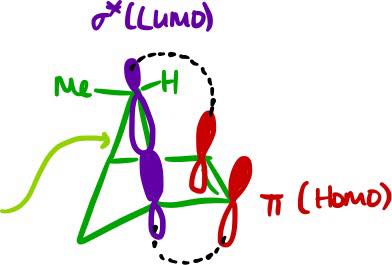 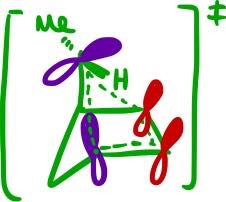 If you now "join" the shaded lobes then you can see how the correct stereochemistry arises.

In general my preferred way of analysing pericyclic reactions is to use Woodward and Hoffmann's original rules. Here, there is no shading of lobes: you connect the lobes within geometrical reason, then count the number of $4q+2$ suprafacial components, and the number of $4r$ antarafacial components. If the total is odd, the process is thermally allowed; if it is even, the process is thermally forbidden.

I am not going to explain this approach in detail - it is too long for here and it is adequately covered in textbooks which you should have access to - but I will upload the two diagrams I drew:

Not the answer you're looking for? Browse other questions tagged organic-chemistry pericyclic stereoselectivity or ask your own question.

29
Why are DCM and chloroform so resistant towards nucleophilic substitution?
17
Orbital correlation diagram for the cleavage of cyclopropylmethylene carbene
14
What's the reaction type of the Hydrogen shift?
5
Why can't we use orbital correlation diagrams for sigmatropic rearrangements?
9
How does conjugation affect reactivity?
2
FMO analysis of the [3,3] Sigmatropic reaction regarding geometry. Is it accurate?
5
Photochemical cycloaddition of ethene