When two negatively charged molecules are hydrogen bonding with each other, why do the charges increase?

[EDIT: As some commentators have suggested, I should conclude that the energy minimize feature is not intended for the purpose of Hydrogen-bonding, and primarily for refining the modelling of molecules.]

Using the Chem3D automatic Huckel charge calculator, I was able to calculate the charges of the atoms in the citrate and borate ion.

I use the energy minimize function to make the two hydrogen bond. I then do the charge calculation, and I found that some of the citrate's oxygens' charges increased to ~-0.67, while some of them decreased, and the borate ion's increased to ~-0.5. The hydrogen atoms do increase positive charge. 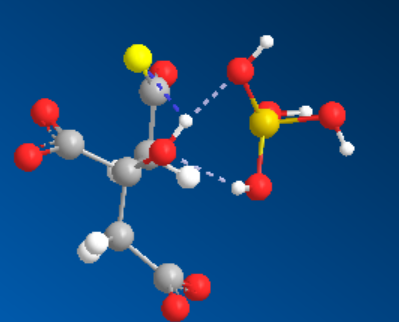 I actually noticed another particular feature, the oxygen atom of the hydroxyl involved in both hbond donating and accepting has a positive charge now. The other charges remain as I've explained above. The highlighted yellow atom was just an oxygen atom that I clicked.

Would it be a feature of the calculator, or would this be the scenario in real life?

I am interested in how different ions are compatible with borate in terms of hydrogen bonding and screening, based on their charges. This will aid my experiments.

Browse other questions tagged organic-chemistry computational-chemistry or ask your own question.

4
How to find molecular charge of fragments using quantum calculations?
4
What is the correct Lewis structure of diazomethane?
23
How dependent are computed charges using the quantum theory of atoms in molecules on the used level of theory?
4
Stability of canonical forms
1
Intermolecular interaction between aniline and dichloromethane