The famous method for the Nobel prize in studying Graphene is the so-called "scotch tape" method. Here, one takes a weakly-bonded van der Waals-type material and peel a layer off. From that layer, another piece of tape is taped onto the original piece of tape with the layer to split it into two pieces. This is repeated until nanometer thick layers are produced.

At this point, you have a single monolayer on a piece of tape, and need to transfer it onto a grid to look at it with a TEM (transmission electron microscope). However, the monolayer is much too thin to peel off the tape, so the tape must be completely dissolved.

The question I have is: what are the best options for dissolving tape?

Obviously there are many, many variables at play here. But here are some relevant constraints:

For example, I found a question on Research Gate that suggests using an alkaline solution to completely dissolve Kapton. I wonder if there are other methods for scotch tape

Since this method for TEM preparation is so common there must be some great literature resources on this topic, so resource recommendations would be great!

I don't fully understand the mechanics of "stickyness" so a description from the atomic perspective would be useful, especially in understanding what good solvents should do.

Generally you use Acetone. The following is taken from Enoki, Toshiaki, and Tsuneya Andō. 2018. Physics and Chemistry of Graphene : Graphene to Nanographene p. 94

The Scotch tape method is very common in the fabrication of graphene devices, which are mainly used in research into the fundamental properties of graphene. It can produce high-quality graphene with lateral sizes ≤ 0.1 mm; however, controlling the size and position of the graphene is almost impossible. The following is the typical procedure of the Scotch tape method:

(i) Place a few flakes of graphite (≈ 1 mm) on the adhesive side of a plastic sticky tape with tweezers (Fig. 3.1(a)). Scotch tape (3M) and Nitto tape are commonly used. Natural graphite, Kish graphite, or HOPG (highly oriented pyrolytic graphite) is usually used for the starting material.

(ii) Fold the adhesive side to sandwich the graphite flakes and press the tape firmly (Fig. 3.1(b)).

(iii) Peel the tape apart slowly, so that the graphite flakes are cleaved and attached on both sides of the tape (Fig. 3.1(c)).

(iv) Repeat the second and the third steps with slightly shifting the fold line, so that the graphite flakes do not overlap (Fig. 3.1(d)).

(vi) Prepare a silicon substrate with a silicon dioxide layer on the top surface (Fig. 3.1(f)). Place address markers on the surface in advance using photolithography so that one can easily locate the position of a graphene flake in an image. These markers are indispensable for further microfabrication on graphene. An example of the address markers is shown in Fig. 3.2

(vii) Attach the adhesive side of the tape with the graphite flakes to a silicon substrate, and gently rub the surface to remove any air between the substrate and the tape (Fig. 3.1(g)).

(viii) Slowly peel the tape off the substrate (for example, more than 2 min for a 1 cm substrate) (Fig. 3.1(h)). Not only graphite flakes but also some adhesive remains on the substrate. The latter can be removed by submerging the substrate in acetone for a few seconds. 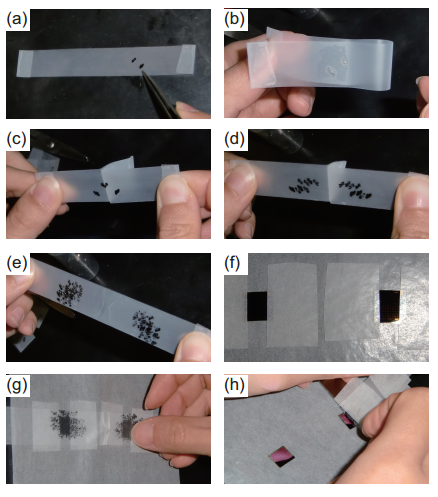 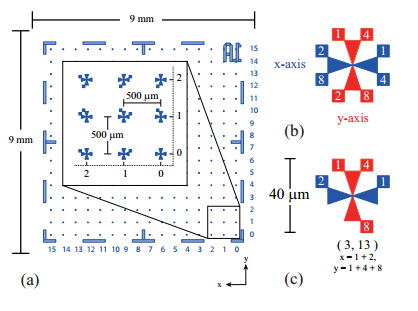 It is also reported that in the scotch tape method, not only graphene flakes but also a large amount of adhesive is attached to the substrate. You get rid of it immersing the substrate in Acetone. Other methods are reported in the reference too.

About adhesion There are lots of aspect about adhesion. About scotch tape the most interesting answer you can find here "https://www.scientificamerican.com/article/what-exactly-is-the-physi/" is the following

"The simplest answer that I can give to the question is that pressure-sensitive adhesives (which are polymers) are 'tacky' or 'sticky' because they are essentially very high viscosity liquids that also have some elastic characteristics--in technical terms, they are 'viscoelastic.' This property means that they exhibit some of the characteristics of liquids, and so they will 'wet' a surface to which they are pressed. But then, because of their elasticity, they will resist separation when stressed. Thus, 'stickiness' is strictly a physical (viscoelastic) phenomenon, not a chemical one."

Kapton is a polyimide: 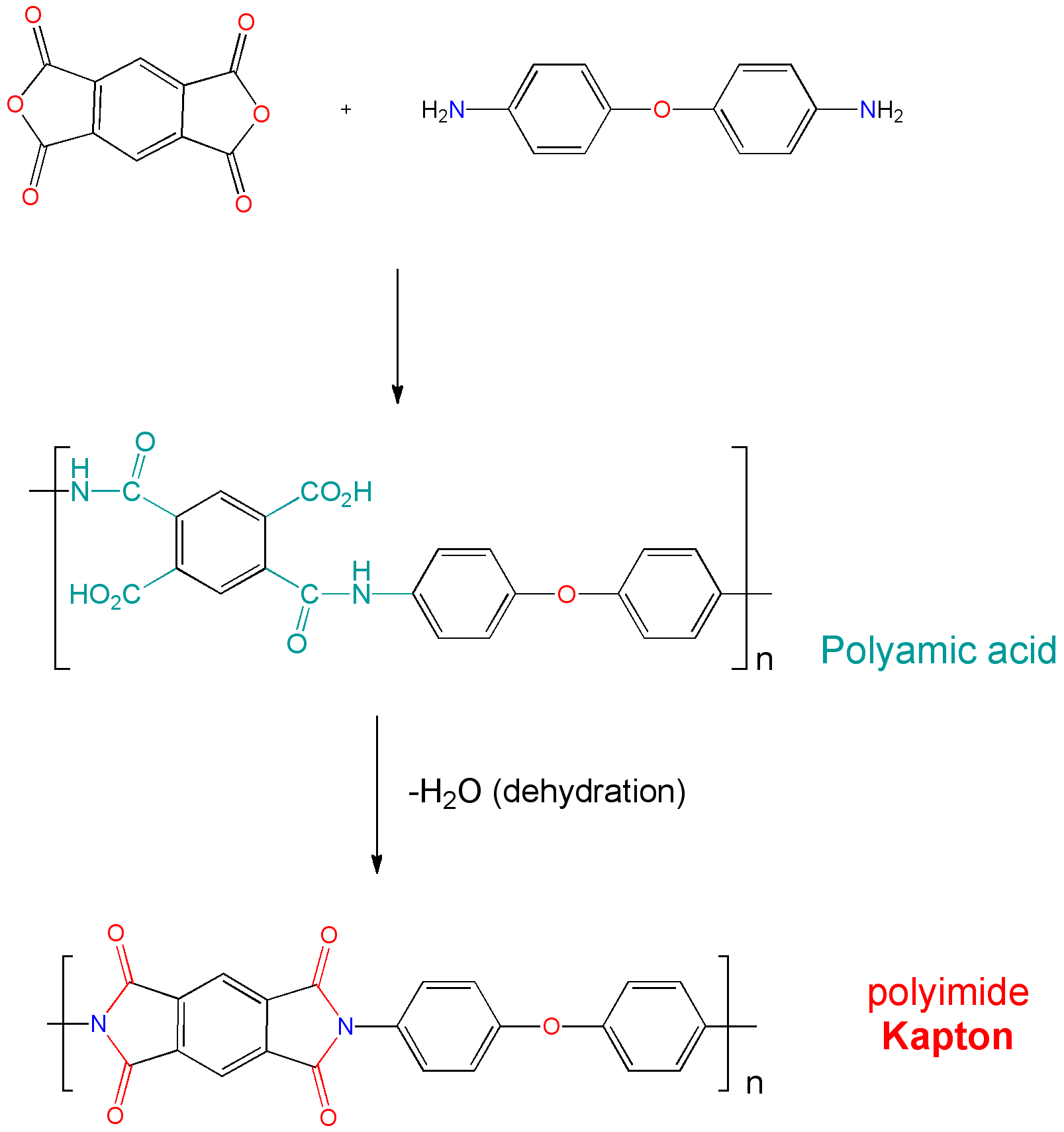 It contains an $\ce{N}$ substituted phtalimide as a substructure. This kind of compound is used in the Gabriel synthesis to make primary amines. The synthesis is very ingenious because no secondary or tertiary amines can be formed, which is normally the problem with direct alkylation.

In the final step the phtalimide is hydrolyzed with hydrazine, a reaction that works very well. A 35-50% solution of hydrazine in water is used.

Hydrazine is not the most innocuous of products, although in solution it is not so dangerous, and should be used in a fume cupboard.

If you do not have a minimal Chemistry lab at your disposal, then you can better try to use a potassium hydroxide solution. I have never tried it because the hydrolysis with hydrazine gives such good results.

4
Can fully-hydrogenated oils be mixed with unsaturated oils for use in food (margarines, etc)?
10
Explain the formation of replicators to a layman
0
Regioselectivity for electrophilic aromatic substitution with multiple strongly electron withdrawing groups
3
Are there methods for iron content determination in spinach that do not require thiocyanate?