I asked a question previously about "why" it is the case the expanding the size of pi-conjugated systems decreases the required energy to excite an electron from a HOMO to a LUMO band: Why does the energy gap for π - π* transitions shrink with the size of the pi-conjugated system?. The user "Philipp" (and others) very patiently and kindly explained the reason for this by pointing out the expansion in the number of possible bonding and anti-bonding configurations for a polymethine-like pi-conjugated system.

However, there's something I'm missing that has to do with what is probably my lack of knowledge about chemistry. If we look at this image: http://i.stack.imgur.com/Ti3cx.png (provided by "Philipp") why is that that we have an energy gap between $\Psi_2$ and $\Psi_3$ smaller than the energy gap for a simpler, smaller pi-conjugated system where the HOMO corresponds to a single pair of p-orbitals in a bonding conformation and the LUMO corresponds to the same single pair of p-orbitals in an anti-bonding conformation (i.e. this system: http://i.stack.imgur.com/9cscv.png)?

Update --- Could we justify the above guess using something like an overlap integral (if we know the shape of the two bonded p-orbitals forming a pi-bond)? If so, this would be quite intuitive.

If you want to really understand why energy levels of conjugated $\pi$ systems are the way they are I suggest you take a good look at the Hückel theory as @ssavec suggested - this method is only an approximation but because of its simplicity it is really good for helping you to understand the underlying concepts. Nevertheless, doing as you suggested and looking at the overall overlap between the $\text{p}$ orbitals in a given molecular orbital does indeed seem to work although I don't have a strict justification for that.

Let's apply this to butadiene.

When you calculate the atomic orbital coefficients for each molecular orbital $r$ then you get to the following picture: 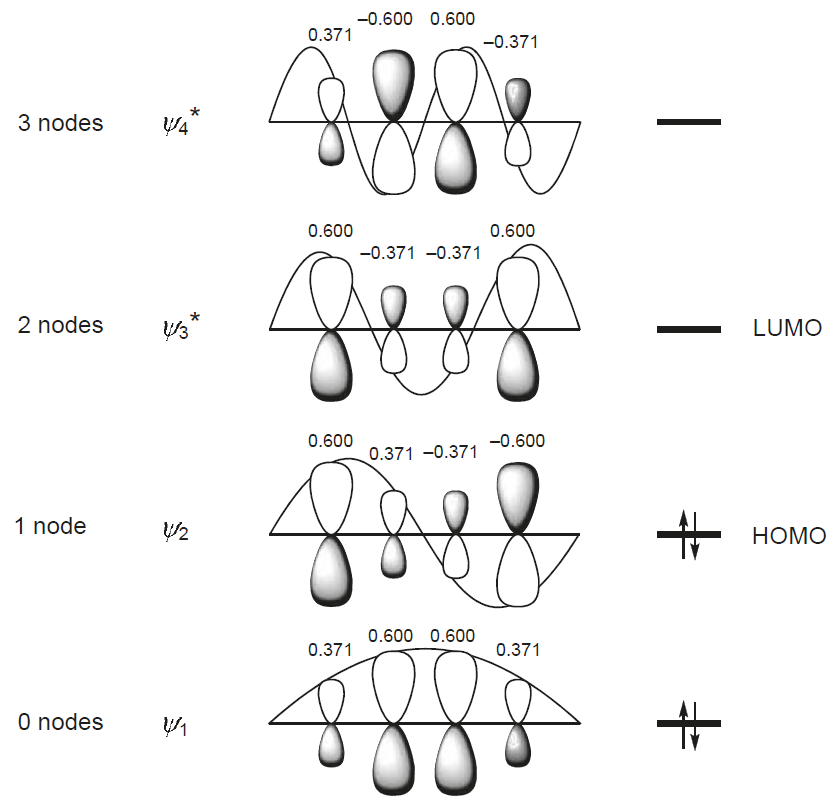 where the numbers above the different $\text{p}$ orbitals are the coefficients.

Doing the same for ethene you get the following: 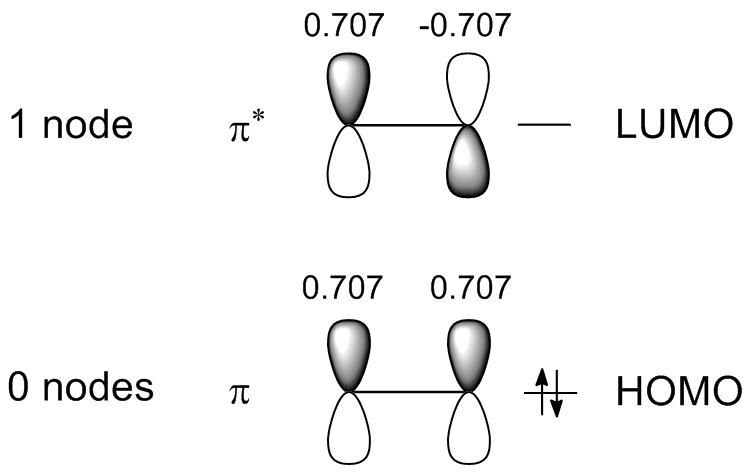 Now, what about the LUMOs:

Not the answer you're looking for? Browse other questions tagged electronic-configuration quantum-chemistry or ask your own question.

24
Why does the energy gap for π - π* transitions shrink with the size of the pi-conjugated system?
1
Is the smallest or largest diameter important for the color of a molecule?

6
Bonding and anti-bonding orbitals in the light of time-dependent Schrödinger equation?
24
Why does the energy gap for π - π* transitions shrink with the size of the pi-conjugated system?
3
A reversible exothermic reaction between a molecule in an excited triplet state and a reducing agent
5
Through bond interaction in biradical dioxo compound and its correlation diagram
5
Formation of Bonding and Anti-bonding Molecular Orbitals
8
How to explain the discrepancy between the calculated absorption wavelength within the particle in the box theory and the observed wavelength?
10
Why might a planar, conjugated molecule be higher in energy than a nonplanar system?