I would like to try to give a more detailed answer, but this is all I can give right now. I am fairly confident this is what is going on.

The dominant intermolecular force which determines the boiling point is dispersion. Because dispersion is the result of instantaneous dipoles, the strength of the interaction is proportional to the "surface area" of the molecule. There is no well-defined measure of the surface area of a molecule, but the most common way to describe this would be by using a van der Waals' radius for the atoms/groups.

The important point, however, is that when we add another carbon with its hydrogens, to a hydrocarbon, the mass increases linearly, while the surface area increases proportional to the square of the van der Waals' radius.

Notice, however, that this argument should be exactly the same for a linear alkane, and not just an alkyne. I made this same plot for the first fifteen n-alkanes, and the trend is very linear. 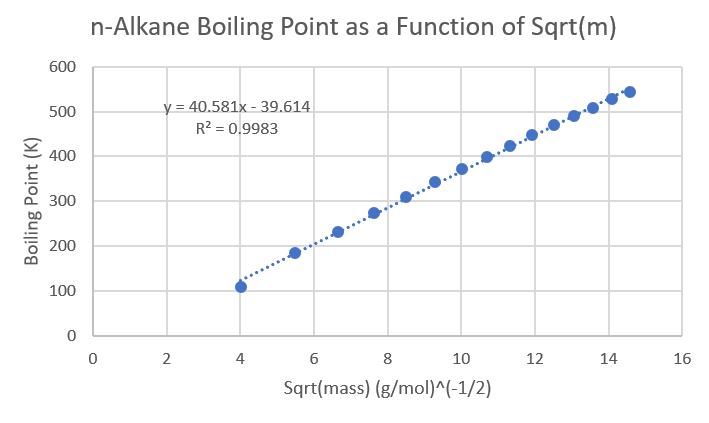 As to why there isn't a similar trend for the melting points, melting temperature is much more sensitive to symmetry than the boiling point, so how the molecules stack will make quite a difference. I would expect that hydrocarbons do not form very good crystals, so the trends may be highly dependent on the specific molecule.

Also, notice that the more branched these molecules are the less this argument should apply to the boiling point because each groups added at branching points will add less surface area than for the straight alkane because some of the surface area will be "redundant" so to speak.

Great observation! I hope my answer is right. I'm sure this has been noticed before, so it would be interesting if someone could find references.

Another way of thinking about this which I like is this:

So, the only jump left is from surface area to boiling point, which is already understood to be related through dispersion forces.

Not the answer you're looking for? Browse other questions tagged organic-chemistry boiling-point or ask your own question.