In the mass spectrum of niacin (3-pyridine-carboxylic acid), what ion corresponds to the peak at m/z = 105?

The mass spectrum can be found here.

So the issue is: why would niacin (or nicotinic acid) undergo this $\ce{H_{2}O}$ loss? It is not observed for other similar molecules such as benzoic acid, which starts by a $\ce{OH^{\bullet}}$ loss. I did find two relevant publications in the literature on this point. Neeter and Nibbering[1] performed $\ce{D}$ labelling experiments, showing that the transferred hydrogen atom originates mostly from the $\alpha$ position (ortho from both the carboxylic acid and the nitrogen atom). Opitz[2] measured the appearance energy (AE) for $m/z$ 105 at 10.94 eV, more than 0.6 eV lower than the AE for $m/z$ 106 at 11.58 eV. He also suggests, based on metastable dissociation data showing loss of CO to $m/z$ 77, two possible structures for the $m/z$ 105 ion. So to answer the question: (a) formation of the $m/z$ 105 ion is thermodynamically favored compared to the formation of the $m/z$ 106 ion.

Based on this (scarce) literature evidence, I would suggest, based on labelling experiments, that some proton transfer occurs between the $\alpha$ cycle hydrogen and the hydroxyl group. This exchange can either move back and forth, or lead to a loss of water through formation of a cyclic structure.

I did quick simulation with MMass (open source, available on Windows, MacOS, Linux) for the isotopic distribution in this region (Tools > Mass Calculator), and it looks like there are two $[\ce{M}-\ce{1e}]^+$ fragments: 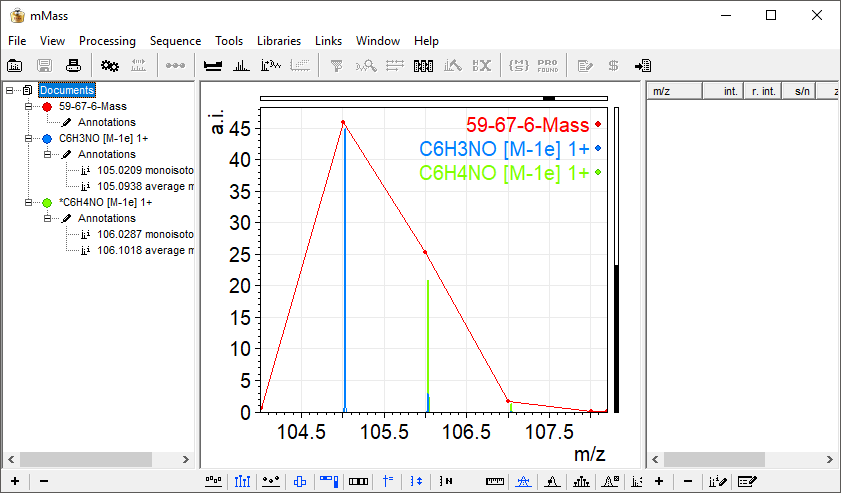 Addition of the signals from both fragments (blue and green colors) would give nearly ideal peaks distribution reflecting experimental data (red color).