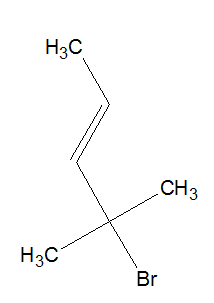 I understand that the longest chain is of five carbon atoms. However, I am having trouble assigning the locants here.

Obviously, there are no functional groups in this compound so the first point of difference rule should govern the numbering of locants. Hence, according to me, bottom-to-top locant assignment is correct here.

What rule am I missing here?

I figure out the unsaturation is being given preference here, but I do not know any rule regarding it.

However, you are missing the priority for unsaturation (i.e. multiple bonds), which is between the priority of the principal characteristic group. The most important simplified criteria for the numbering of simple acyclic compounds are:

Since the compound that is given in the question does not have any principal characteristic group, the first criterion (greater number of suffixes) given in P-14.4 (c) is not relevant in this case.