This is the boiling-point elevation equation:

If we do the limit of the above, for $b\rightarrow\infty$ we find that the boiling-point elevation is infinite. How this could be explained under a physical view?

For example, if we use a solute molality that is so big that the solution would be something like the pure solute, the final boiling-point of the solution, in the case of water as solvent for example:

Now, please forget what I've said above about $b\rightarrow\infty$. And take a look at this: 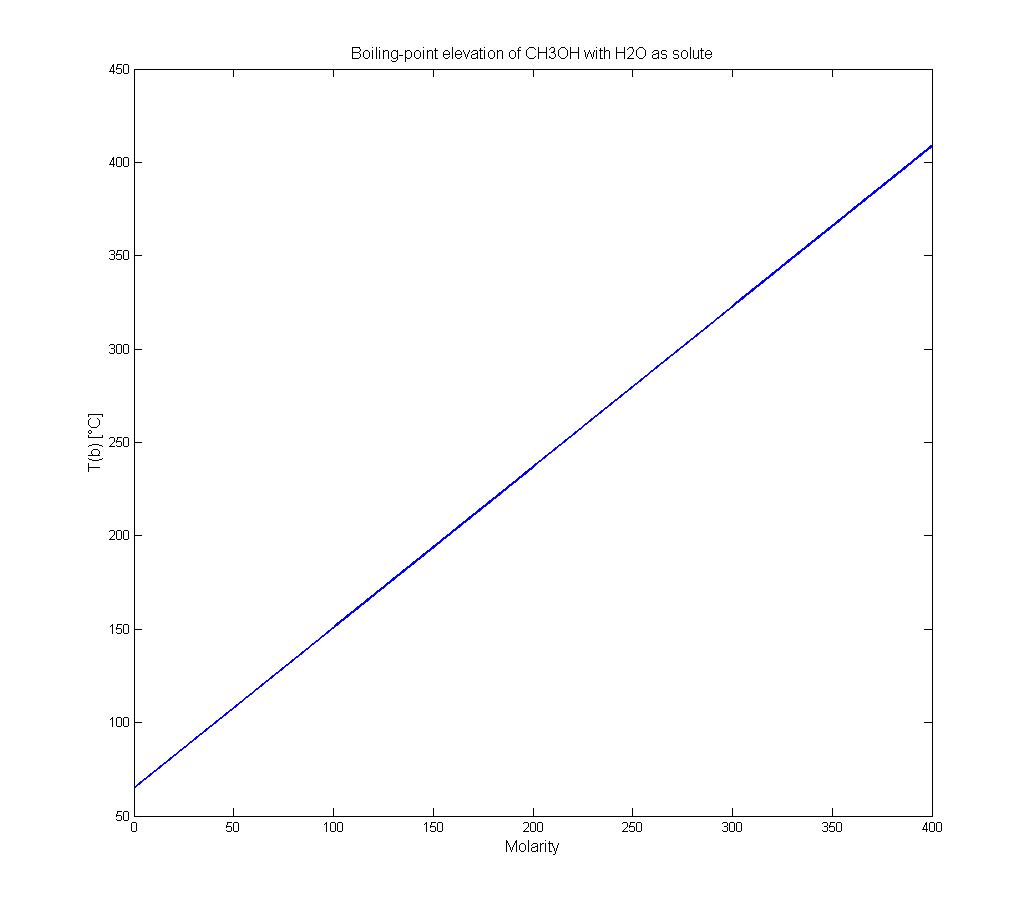 right? If yes why (in the above case):

In reality, when you're saying that the molality is infinite, you are indeed basically asking for solute with infinitesimal amounts of solvent, and it will be true that $T_\text{solution} \approx T_\text{solute}$.

This equation describes the boiling point of the solvent under the effects of the non-volatile solute. Ie. you're making the assumption that the solute does not enter the gas phase at the temperatures you're considering.

So to elevate the boiling point, we're making the claim that for a given temperature, the chemical potential of the liquid phase is lowered (it's made more stable), or equivalently, that the vapor pressure is lowered. The effect is entropy based.

Now imagine that we add solute molecules. There will be less liquid solvent-molecules present at the liquid-gas interface, and thus a lower rate of liquid -> gas (meaning a lower vapour pressure), simply because the probability of a liquid molecule hitting the phase interface is lower... So the temperature has to be higher to compensate, if we want to counter the unchanged rate solvent molecules going from gas -> liquid.

Why boiling point goes infinite: At the limit where molality goes towards infinity, there will be an infinitesimal amount of liquid solvent molecules at the phase interface... And if we want that infinitesimal amount of molecules to sustain a vapour pressure that equals the atmospheric pressure, we need a temperature that approaches infinity as well.

The flaw in your reasoning is that the molality $b = n(\text{solute})/m(\text{solvent})$ cannot be infinite even if you use a solute molality that is so big that the solution would be something like the pure solute. Take water as an example: How concentrated is water? Very concentrated you may say - but the concentration is limited. We know that one mole of pure water has a mass of 18 g and occupies 18 cm³. So, in one dm³, there are 1000/18 = 55.56 mol which gives you a water concentration of 55.56 mol/dm³. You cannot get more concentrated water than this (unless you did something drastic like taking it into a black hole!). For the molality it is quite similar: If you dissolve something in water the solute concentration cannot exceed the concentration of water, so $n(\text{solute})$ (and therefore $b$) has an upper bound.

Not the answer you're looking for? Browse other questions tagged physical-chemistry boiling-point or ask your own question.