Michael Faraday melted sodium chloride in a silver spoon and ran an electric current through the molten salt, which released chlorine as a gas and left pure sodium behind.

*I know he invented the bunsen burner, but did he use that?

The answer is given in Faraday’s own work, Experimental Researches in Electricity, Volume 1, freely available thanks to The Project Gutenberg:

399. Other substances, which could not be melted on glass, were fused by the lamp and blowpipe on platina connected with one pole of the battery, and then a wire, connected with the other, dipped into them. In this way chloride of sodium, sulphate of soda, protoxide of lead, mixed carbonates of potash and soda, &c. &c., exhibited exactly the same phenomena as those already described: whilst liquid, they conducted and were decomposed; whilst solid, though very hot, they insulated the battery current even when four troughs were used.

The text above shows that the lamp in question is the spirit lamp, and the whole aparatus is described here: 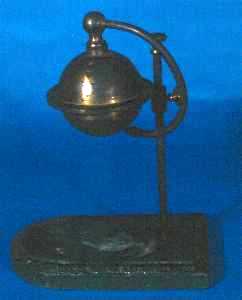 The crux of it is that an open flame might not have enough heat, so a conventional flame is simply contained into a more restricted space.

Not the answer you're looking for? Browse other questions tagged experimental-chemistry melting-point or ask your own question.

106
How do you melt metals with super high melting points?
6
How can sodium chloride melt ice or keep it frozen?
5
How does ice melt?
6
How could uranium be extracted from ore to be melt?
4
How do you melt magnesium without causing its combustion?
2
Temperature and pressure for three phase equilibrium of aqueous sodium chloride solutions
5
Why did ammonium chloride fumes turned pink in this synthesis?