Why do most drugs (eg: oxycodone) have seemingly arbitrary names?

How do some medicines derive their names?

For instance, is the name oxycodone somewhat arbitrary? I am not well-versed in Chemistry (1st semester student) but does the prefix oxy- imply some chemical meaning as well as the -codone such as some sort of functional group or grouping of molecules?

I realize such nomenclature such as di- implies "two".

The reason why the generic name of most drugs have seemingly little semblance to their chemistry is in the interests of practicality; a doctor would find it easier to write sildenafil (generic name) or Viagra (brand name) in a prescription than 5-{2-Ethoxy-5-[(4-methylpiperazin-1-yl)sulfonyl]phenyl}-1-methyl-3-propyl-1$\ce{H}$,6$\ce{H}$,7$\ce{H}$-pyrazolo[4,3-d]pyrimidin-7-one (chemical name) unless he had a weird fetish for IUPAC nomenclature .

As for how manufacturers (and the relevant regulatory bodies) arrive at those generic and brand names, msdsmanuals.com has a take on this,

Generic names are usually more complicated and harder to remember than brand names. Many generic names are a shorthand version of the drug’s chemical name, structure, or formula. In contrast, brand names are usually catchy, often related to the drug’s intended use, and relatively easy to remember, so that doctors will prescribe the drug and consumers will look for it by name. Brand names often suggest a characteristic of the drug. For example, Lopressor lowers blood pressure, Glucotrol controls high blood sugar (glucose) levels, and Skelaxin relaxes skeletal muscles. Sometimes, the brand name is simply a shortened version of the drug’s generic name—for example, Minocin for minocycline.

As for commercial names, pharmaceutical companies are reluctant to share their strategies. These are hugely important brands, even after the patents expire--nobody knows what Sildenafil citrate is, but everyone knows its brand name of Viagra. And the odds are you know someone who insists on brand-name Tylenol instead of discount-store acetaminophen.

Though pharmaceutical companies contacted by PopSci wouldn't share their marketing secrets, you can still derive a drug's molecular and popular heritage just by studying its name. Like, for example, Tylenol. Its chemical name is $\ce{N}$-acetyl-p-aminophenol--see the -tyl and -ol in there? Then there's Viagra. It doesn't sound like sildenafil, but it certainly suggests vigor and virility--exactly what Pfizer wants you to think. Xeljanz, which was approved earlier this year after almost 20 years of research, targets a protein called Janus kinase. It works in a different cellular pathway from other arthritis drugs. That's where you get the -jan part of that name, which, to someone with a drug decoder, connotes its uniqueness.

As for oxycodone specifically, it's anyone's guess, since that information can't be found (online) easily enough.

The naming of drugs is not completely a randomised process but depends on various factors most of which are linked to origins, chemistry or any modifications during the drug discovery pipeline although in old times serendipity discovery often led to trivial names being given to drugs.

While morphine seems have been named arbitrarily, the same is not true for its synthetic derivatives . In the opioid class morphine and codeine are considered prototype drugs to which other derivatives are synthesised:

How are drugs named?

Most drugs have at least three different names by which they can be recognised. These are their chemical, generic (non proprietary) and trade (proprietary) names. Chemicals names of drugs are extremely cumbersome to use that they they are almost never used except by pharmacologists and chemists such a name for example: N-(2,6 dimethylphenyl)-5,6-dihydro-4H-1,3-thiazin-2-amine, which is more commonly known as xylazine.

Every drug has several different names, and some have a very large number. This abundance of names is often a source of confusion and can indeed be dangerous. The various names have different origins and uses. 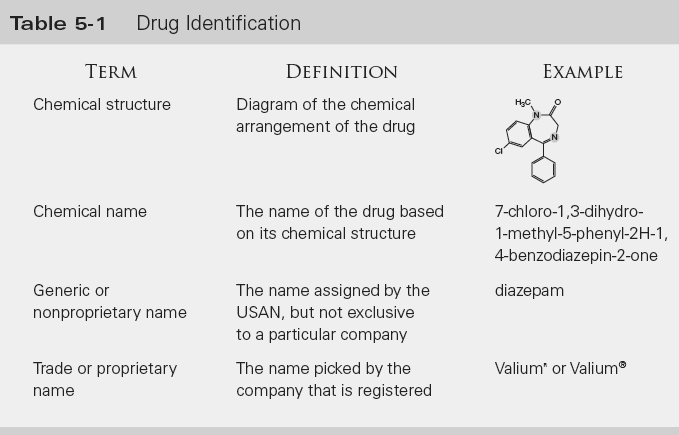 Drugs are named in a variety of ways. During the drug’s earliest stages of development, the first name it receives is the chemical name. The chemical name provides scientific and technical information because it is a precise description of the substance in accordance with chemical nomenclature rules established by the International Union of Pure and Applied Chemistry (IUPAC). The chemical name describes the chemical structure of the drug. Because they are long and complex, however, chemical names are rarely used in clinical medicine.

The generic name is commonly used to describe the active drug(s) in the product and is easier to pronounce and remember than the chemical name.

Morphine is derived form the Greek god of sleep, Morpheus (Morphine was isolated from opium in 1806 by a German pharmacist, Seturner. He named the compound “morphine” after the Greek god of dreams “Morpheus.”).

On the other hand Salbutamol derived from its chemical name which includes salicyl, butyl, amine and alcohol groups another similar example is acetaminophen or paracetamol.

Other names are derived from the nature of the drug or how it is isolated from the parent substance for example monoclonal antibodies: because the original monoclonal antibodies (mAbs) were of mouse origin and therefore immunogenic, newer generation mAbs are genetically engineered to modify the mouse regions to appear more “humanized.” mAb nomenclature indicates “-umab” e.g adalimumab as human (produced using transgenic technology), “-ximab” e.g rituximab as chimeric, and “-zumab” e.g alemtuzumab as humanized.

The proprietary name is the commercial name given to the drug by the pharmaceutical company which makes and promotes it. Newer drugs are only protected by patent for a few years after their introduction so it is important for the manufacturer to firmly establish the trade name during this period so that when it is out of patent the drug will continue earning revenue. After the patent period runs out, other manufacturers can market the drug and usually introduce new trade names, resulting in the same drug marketed under many different names.

The U.S Adopted Names Council USAN Council is responsible for creating and assigning generic names to chemicals that appear to have potential as new drugs.

The USAN Council has several criteria for a generic name. The name must be appropriate for the drug; short, easy to pronounce, and euphonic; and suitable for routine use both in the United States and internationally. The name cannot be misleading or confusing or imply efficacy or application to particular anatomical parts. The name often has a stem common to related drugs (e.g., angiotensin-converting-enzyme inhibitors end in "pril"). The USAN Council attempts to minimize similarities with other drug names,

Not the answer you're looking for? Browse other questions tagged organic-chemistry everyday-chemistry terminology drugs pharmacology or ask your own question.

4
Why does almost every drug that causes dependence have this "-ine" suffix?

5
Why do pharmaceutical drugs have a expiration date?
21
Why formulate drugs as HCl salts when HCl is in stomach acid?
2
Why do compounds with similar properties have different Stitch IDs?
9
Why is there a comparative lack of variety in positive counterions in drugs?
8
Why are drugs mixed with their sodium salts?
1
Which compound will have the most stable enol form?
4
Why does almost every drug that causes dependence have this "-ine" suffix?