Why is this β hydrogen in trans position to the leaving group?

One of the most widely used methods for the formation of $\ce{C=C}$ is β - elimination reaction of the following type:

The spatial arrangement for a bimolecular elimination (E2) of the type shown above requires a trans geometry of the β - hydrogen and the leaving group (X). In most of the cases, the most substituted olefin is the favored product. However, in the case of ammonium and sulphonate salts, the least substituted olefin is formed as a major product

Identify the major product in the following reaction:

As you can see in the diagram they've drawn, the $\ce{NR3+}$ is in the plane of the paper, while $\ce{H}$ is NOT in the plane of the paper. Thus, I would not consider them as trans, since they are not exactly opposite to each other, but are in fact, inclined to each other at certain angle. In the current diagram, I would only consider (1) the two H atoms on a wedge and a dash position, (2) the left phenyl and right $\ce{NR3+}$, (3) the right phenyl and the methyl - as trans to each other, as then they are exactly opposite.

As is obvious in the answer key, they've considered the given H atom and the $\ce{NR3+}$ as trans and have eliminated them to yield:

Thus I wish to know exactly where my reasoning is wrong? Thanks!

Complete problem 2 and its answer key for reference

Your assessment of which groups are trans to each other is correct but you have not taken into account that the molecule can adopt other conformers.

The classic confomation for E2 elimination is when the hydrogen and the leaving group are trans. This is because it maximises the orbital overlap between the $\ce{C-X \sigma ^*}$ and the $\ce{C-H \sigma}$ orbitals which are key to the reaction. 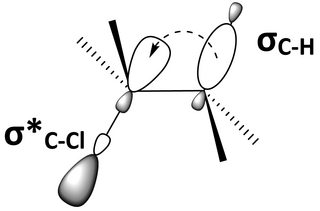 As shown in the question, the molecule will not undergo elimination without rotating into the appropriate conformation where the hydrogen and the leaving group are trans. This leads to the product shown.

Other points to note:

However, in the case of ammonium and sulphonate salts, the least substituted olefin is formed as a major product

This seems to be a complete red herring because there is no option for variably substituted products in this case (or in any other case of E2 elimination that I can think of?).

3
Si and Re facial descriptors
2
What is the stereochemistry resulting from hydroboration of 1-methylcyclopentene?
1
How to determine the stereochemistry after elimination of anti-1-bromo-2-methylcyclohexane?
6
Hash and Wedge nomenclature
2
Why aren't there 2 products formed?
8
Why are hydrogen bonds in an antiparallel beta sheet stronger than those in parallel beta sheets?
6
Major product in dehydration of alcohol
9
Determining if the product would be cis or trans after an anti elimination on fischer projections