What chemicals cause the smell of a septic tank?

I am wondering what chemicals exactly contribute to the smell of a septic tank system. I read about $\ce{H2SO4}$, $\ce{NH3}$, but I am not sure. Is methane also a factor or is that odorless?

According to the Wikipedia article Septic tanks, as septic tanks are generally anaerobic environments, pungent smells from the formation of hydrogen sulfide $\ce{H2S}$, which is sometimes referred to as 'rotten egg gas'. As you stated, ammonia $\ce{NH3}$ can be produced - also with a distinct smell.

Also, according to the Wikipedia article, fermentation could occur, producing the odourless methane and carbon dioxide as well as phosphates.

Some of the "fragrances" are formed in the degradation of different amino acids.

Amaterasu has already described that hydrogen sulfide is an important component in the septic tank perfume. It is formed in the degradation of the sulfur-containing amino acids methionine (1) and cysteine (2).

In the anaerobic degradation of methionine, the initially formed methylmercaptan ($\ce{CH3SH}$, 3) is methylated to dimethylsulfide ($\ce{CH3-S-CH3}$, 4). Further microbial transformations of 3 and 4 eventually yield $\ce{H2S}$ . 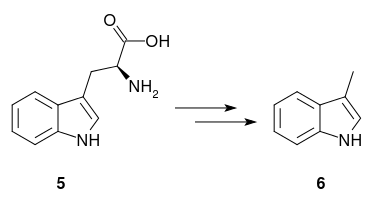 The degradation of the amino acid tryptophan (5) furnishes 3-methylindole (skatole, 6), the aroma of feces.

Just for the completion of the sensoric enjoyment: Other amino acids, such as ornithine (7) and lysine (8) form 1,4-diaminobutane (9) and 1,5-diaminobutane (10), respectively upon decarboxylation (= loss of $\ce{CO2}$). 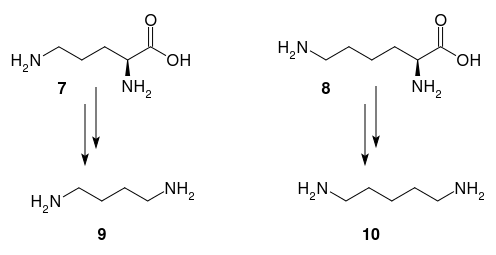 The trivial names of these diamines are putrescine and cadaverine, which suggests another odor than that of roses and lemons ;)

I'm however not sure if the last two compounds are actually formed in septic tanks.

The smell coming out of a septic tank depends on (1) what goes into the septic tank, (2) how long the material has resided in the tank, (3) where the septic tank is located, (4) the current weather/climactic conditions, and (5) how well the tank is maintained. The point being, at any given time or location the smell of a septic tank can change due to the emission of a different combination of chemical compounds.

Interestingly, if hydrogen sulfide is overwhelmingly the dominant compound, that likely means the septic tank is being fed sulfur water. This compound is has a very distinct smell of rotten eggs.

Fresh waste may have odors dominated by indole and skatole which, while not very high in relative concentration, have lower odor detection thresholds. Because the odor detection threshold is low, a very small quantity of these compounds gives fresh waste its distinctive odor. Other compounds include the methly sulfides, butyric acid, valeric acid, and phenol. (It is worth noting indole is a highly unusual compound in that at high concentrations it smells like fecal matter, but at low concentrations it smells like flowers.)

Most people do not notice the odor of a septic system until something goes wrong. If something is wrong then an unpredictable release of many oddball malodorous organics may be caused by the incomplete digestion of the fresh waste by microorganisms living in the septic system. If the septic system is operating correctly, then the contents has time to be thoroughly digested by the microorganisms living in the system. The system should be releasing compounds in the most broken down forms, which would be water, carbon dioxide, methane, hydrogen sulfide, and ammonia. If the septic system is functioning properly, the odor from the system should be minimal.

-Also, as a side note some septic systems prevent the compounds emanating from fresh waste from coming into a house through the use of traps. These traps may be in floor drains. Make sure all traps draining into a septic system are periodically flushed with water.

Methane has no odor. This may be confusing because malodorous compounds, like dimethylsulfide, are added to natural gas, which is mostly methane, to give its unique smell. This smell has the purpose of leak detection.

Sulfuric acid and ammonia are used for clog removal and cleaning. If someone who cannot tell a clog from a backed up septic system tries to throw these chemicals down the drain as opposed to paying someone to pump the system, then all these chemicals may do is kill the micro-organisms. If the microorganisms die then the system may emit the odor of the chemicals as well as undigested fresh waste.

23
What is the smell of 'burning' metal?
24
Is sodium chloride really odourless? If yes, what do I smell?
14
What is the smell of a glass of water in contact with fresh air?
21
Why does brown sugar have a strong smell but white sugar doesn't?
7
How does the smell of a compound come about, and is it possible to define a smell?
4
Smell produced in reaction of sodium hydroxide and aluminium