Does granite become soft as modelling clay at 2000 °C?

Mixtures of different compounds do not usually work like that. They generally melt at lower temperatures than the constituent pure compounds. So I would expect your granite to be not like modeling clay, but molten even before getting to the melting point of silica.

If you want modeling clay, try 1300 °C where the Earth's lithosphere gives way to the asthenosphere. See the Characteristics section of https://en.wikipedia.org/wiki/Asthenosphere.

Granite is not composed of the oxides listed, they are just a way of expressing the weight percentage of elements in the sample. Granite (and other rocks) are actually composed of minerals.

All granites contain quartz + alkali feldspar + plagioclase feldspar. Biotite is also pretty common and a variety of other minerals can also be less commonly present. 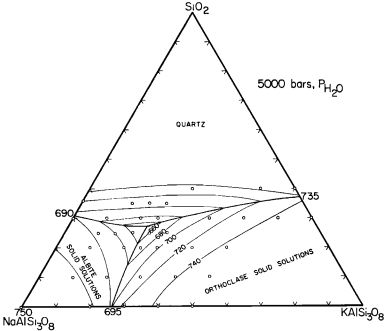 This is a phase diagram of the quartz - alkali feldspar - plagioclase feldspar system at 5 kbar pressure. The first melt forms in this system at the eutectic point at around 650 °C, but complete melting would not occur until a much higher temperature. I expect the last thing to melt would be left over quartz although it would first transform to tridymite and then cristobalite before melting finally melting.

Not the answer you're looking for? Browse other questions tagged melting-point or ask your own question.