How to find the plane of symmetry in biphenyls and substituted cyclohexanes?

I was going through my text book, (Solomon&Frhyle) I came across a couple of of examples which I didn't understand.

How is the molecule symmetrical? Upon folding the molecule over its plane of symmetry the cooh group will be placed over fluorine.

Similarly in this in structures 3,4,5,6 a chlorine atom out of the plane and below the plane coincide.

It's written that for biphenyls to be chiral a can be the same as a'. (Same for b and b') But If a a' and b b' are the same them won't a plane of symmetry lie in the middle perpendicular to the plane of molecule. 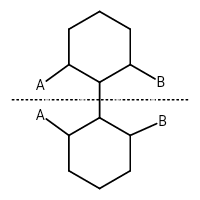 Finding planes of symmetry is simple: try all planes, some (or maybe none) of them will fit.

As for your examples, the first image is just poorly drawn. The plane is supposed to be the one of the ring containing COOH and F, while the other ring is perpendicular to it (which, BTW, I don't believe is the native conformation of the molecule, but whatever).

The second example asserts right things, but for the wrong reasons. (This is not what you would normally expect of a textbook, to put it mildly.) True, each of these structures contains at least one plane of symmetry. Too bad the planes are drawn incorrectly in all structures except for the first two. You may take your time and fiddle around to find out where they really are.

In the third example, you would be right if the molecule were planar, which it is totally not. Steric repulsion between a and a' (also, between b and b') makes that impossible, even if all of the substituents a, a', b, b' are simply hydrogens.