Can a molecule contain a linear series of conjugated pi bonds twisted through 180 degrees?

Imagine a long chain of carbon atoms connected by single and double bonds in conjugated fashion. All of the p orbital pi bonds would normally be aligned to either side of the carbon atoms forcing the molecule to adopt a flat structure. Would it be possible to take this structure and twist it slightly so as to form a long helical shape?

The bond overlap would not be as good but if the chain were long enough I would have thought the bond weakening would not be excessive. Obviously both ends would need to be firmly bonded to some other inflexible linking components such as a large protein molecule or a long chain of aromatic rings.

Has anything like this ever been synthesised? Is it even possible?

Here is an example

either end of this structure would be connected to a larger molecular segment that would hold it in place and prevent it from untwisting. I want to give this normaly flat structure a 180 degree twist.

The material you imagine has been a target for Natta, best known together with Ziegler for they work on isotactic polymers.

Natta was interested in what you describe - polyacetylene - as the extended conjugation would have likely led to unusual electronic properties.

Calculations and models were around theoretically, before and in parallel to the actual synthesis.

The material prepared by Natta was however insoluble and basically no work up was possible. This is not totally surprising if we look at the structure.

After decades, the fortuitous use of thousand time the amount of catalyst led to the formation of nice shiny films of polyacetylene. Still insoluble but so different from commons residues to attract sufficient attention to cause the gathering of brilliant scientists and finally the emergence of an entire field, that of conducting (or better, conjugated) polymers and so called plastic electronics.

This is to answer the final part of the question.

Concernig the first part, if I understand correctly your picture, I can tentatively answer in an apparently convoluted way.

As far a chain of alternating single and double bonds is considered, and without accounting for delocalisation, we have basically free rotation around the single bound. As such, any statistical coil can be obtained.

Conversely, if one imagine a "metal like" structure with full electron delocalisation, the chain is than stiff.

The reality is somewhere in the middle. Real conjugated polymers should be regarded as delocalized pi systems (which at the end is the reason of the huge interest on them) inerhently not much flexible and not very soluble.

Still, a long chain is susceptible to adopt a variety of elical or coiled conformations as a result of collective little departures from planarity. Ideally, you can turn very rigid rod on themselves providing they are long enough.

One cannot apply Flory theory as in polyethylene, but adaptations exist to account for rigidity due to order bond > 1 in conjugated polymers.

Also let me note that independent of the extent of delocalisation (also known as effective conjugation) a linear series of sp2 hybridized C atoms can close to a ring - no need for examples here).

1- Solubility in common solvents is a major challenge towards real application of conjugated polymers. A common strategy is the side substitution with moderately long alkyl chains. This in generak results in improved solubility via an extra entropy term.

2- polyanilyne far preceded the interest on polyacetylene. This systems is more complicated and in a way interesting, but less as far organic electronics is in scope.

3*- a detailed and chemically exhaustive paper appeared well before the paper mentioned in the linked Nobel prize. It has been published in the Journal of the Australian chemical society and it details the preparation and properties of polythiophene.

*(Making products and selling them are two different tasks. This is the lecture I got)

The longest conjugated chain with well-determined crystal structure that would allow to determine the twist angle is cyano-substituted oligoene with 13 all-trans conjugated $\ce{C=C}$ bonds 2,5-bis(11-phenylundeca-2,4,6,8,10-pentaen-1-ylidene)hex-3-enedinitrile (CCDC 847947) [1]. It is also discussed in the article what might lead to a twist in the chain:

The longer oligomers, DPDC7–DPDC13, co-crystallize with one solvent molecule per unit cell and are not fully planar. The central dicyanobutene moiety is planar and to either side out-of-plane bending of the conjugated backbone is accompanied by a slight twist. DFT calculations at the B3LYP/6-31G** level predict fully planar conformations, however the incorporation of solvent as well as bending is common in crystal structures of oligoenes having more than six $\ce{C=C}$ bonds.

We were concerned that the cyano groups would disturb the local structure of the oligoene backbone and minimize the degree of conjugation. Despite the observed bending, the central alkene unit (that having doubly allylic cyano groups) remains planar with a dihedral angle of $180.0^\circ$. This suggests that deviations from planarity may be attributed to co-crystallization with solvent molecules and not the result of cyano-functionalization.

So, the twist can be activated by external factors; however, there is still no known examples of $180^\circ$-twisted trans-conjugated oligoenes.

This does not quite fit your description because it is not a chain but rather a ring, but take a look at Möbius aromaticity. The concept revolves around building large rings of conjugated p orbitals in such a way that following the ring will make you end up on the opposite phase of the same carbon atom’s p orbital. This is an to Möbius band that you can create in real life and are mathematically somewhat fascinating.

A good introduction into Möbius aromaticity, its history as a concept in chemistry and the first attempts to calculate and synthesise such molecules is presented in a review article by Rzepa.[1]

In recent literature, a number of polyporphyrin structures which can adopt Möbius, figure-8 or even more twisted structures have been synthesised; an overview is provided by Stępień et al.[2] However, I also want to highlight one specific example which I personally consider to be most interesting.

In 2008, Tanaka et al. published a figure-8 type octaporphyrin.[3] When drawn traditionally (figure 1), it seems like there are two porphyrin-like coordination sites side by side; however, when viewed three-dimensionally it is evident that these are not planar due to the crossover at the centre of the 8 and there is no easy way for one metal to be coordinated by four nitrogen atoms in each of these. Instead, when palladium(II) acetate is added, two palladium atoms are coordinated in an NNNC fashion with one $\ce{C-H}$ bond being activated by each. Two such products were isolated in $\pu{51\%}$ and $\pu{20\%}$ yield, respectively; both gave crystals suitable for diffraction analysis. 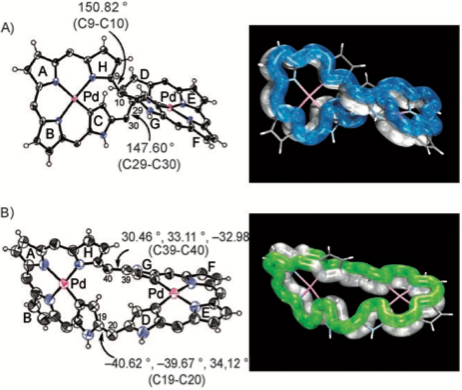 The major product was identified to be the figure-8 twice-twisted and thus Hückel (anti-) aromatic compound depicted in figure 2 A. The minor product was identified to be the remarkably stable Möbius aromatic compound depicted in figure 2 B. Therein, you can also see the π conjugation pathway: in compound A it can be clearly separated into a white path and a blue path while in compound B the white and green path meet in a phase transition.

The $\ce{^1H}$-NMR shifts of protons on the inside of the Möbius ring — $\pu{-1.77ppm}, \pu{-2.93ppm}$, and $\pu{0.24 ppm}$ — clearly indicate the presence of a ring current which is further confirmed by the downfield shift of outer protons. The aromaticity of the 36π electron system is best explained by Möbius aromaticity, the authors claim. (Likewise, for the figure-8 system, a Hückel antiaromatic system is expected by the same reasoning.)

Finally, the authors conclude that:

In summary, metal complexes [B and others] are stable, conformationally locked Möbius aromatic molecules that display distinct aromaticity. The formation of such Möbius aromatic complexes is not only spontaneous, but is also surprisingly general upon metalation with Group 10 metals, as seen in the case of octaphyrin, heptaphyrin, and hexaphyrin. While requiring further study, we currently believe that the formation of Möbius-type aromatic systems under the conditions of metalation is driven by a need to relieve the internal strain that would accumulate upon the formation of complexes in the absence of twisting, with the energetic stabilization provided by Möbius-type aromatization. These results unambiguously validate the concept of Möbius aromaticity predicted by Heilbronner more than 40 years ago. Moreover, the ready availability of Möbius aromatic complexes from expanded porphyrins is expected to stimulate further studies in this area, including their applications in development of functional materials.

Not the answer you're looking for? Browse other questions tagged organic-chemistry molecular-structure stability bent-bond or ask your own question.

10
Is there a single MO that represents the π system of a Möbius aromatic system? If so, what does it look like?
6
Difference between continuously overlapping p orbitals and conjugated pi bonds

5
How can I generally determine which bonds are longest/shortest in a molecule?
4
Synthesizing 2-methyl-2-butanol
5
How can three p orbitals per atom bond in tin (II) sulfide?
8
How to connect structures in Avogadro at certain angles?
2
Can molecule have just h-bonds between its parts
0
What is the 3D shape of an ethane molecule?