How to be able to tell if a molecule will react via SN1 or SN2?

I've been having a lot of issues with a question.

It asks to classify the reaction mechanism for each and to then go on and explain why (1-chloro-2-methylpropyl)benzene has a much faster relative rate.

I am having major issues with the question, because I just cannot tell where there are any major differences between molecules which could make a difference. Both of them have a benzene ring, but this stabilises both the transition state and the carbocation intermediate so will favour both SN1 and SN2. Both reactions are done in the exact same solvent with the same nucleophile.

Any help will be much appreciated. Many thanks :)

Coming back to your problem. Actually, both of the compounds can go through SN1 or SN2 mechanism as the carbon linked with $\ce{Cl}$ is a secondary carbon. But, as you mentioned that you're using $\ce{EtOH}$, and you should know that $\ce{EtOH}$ is little basic, almost neutral, therefore, we can say that now, both of the compounds will go through SN1 mechanism (Remember, the first point of SN1 mechanism, i.e., weak base).

Now, the question is if both the compounds will follow SN1 mechanism, then which will react faster. For this, we will have a look at the SN1 mechanism:

Step 2: Weak nucleophile attacks from either side

Step 3: Substitution product formed (Inversion or retention, based on the step 2)

So, our concern is only the step 2. 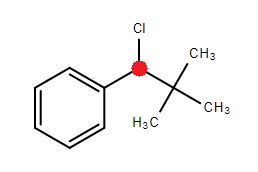 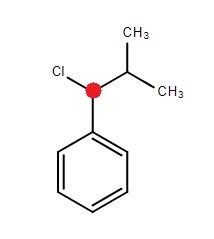 The Carbon with red dot is the point where $\ce{EtOH}$ will attack after the (-Cl) will leave.

Now, on comparing the both the compounds, you will notice that in the first compounds there is greater steric hindrance as compared to the second compound. And, that's the reason why second compound will react faster than the first one.

And, both of the compounds will go through SN1 mechanism due to presence of $\ce{EtOH}$.

4
Does isopropyl chloride undergo SN1 or SN2 with sodium acetate?

6
What are the products in this SN1 reaction?
4
How to distinguish between benzyl chloride and chloro benzene?
4
Does isopropyl chloride undergo SN1 or SN2 with sodium acetate?
3
Organic Chemistry - Effect of methyl substituent in Aromatic Substitution via Benzyne