In 2016 synthesis and structure of tetranitratoethane $\ce{C2H2N4O12}$ were reported [1]. Currently (as of 2017-Q4) this is the only dinitrato-carbon compound with the well-established crystal structure and composition: 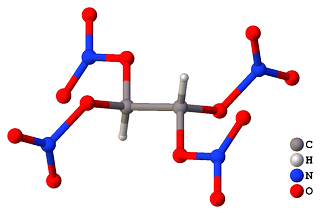 This article also mentions dinitratomethane (reference number updated from 6 to 2):

While nitrate esters such as nitroglycerin (NG) and pentaerythritoltetranitrate (PETN) (Figure 2A and B) are well known, only very few examples of germinal C-nitrato compounds are known. The simplest one, dinitratomethane (Figure 2C) is a liquid which is obtained from nitration of 1,3,5-trioxane in a $\ce{HNO3/H2SO4}$ mixture [2].

Figure 2. Structural formula of nitroglycerin (A), PETN (B), and dinitratomethane (C).

However, I wasn't able neither to get the full-text of original paper from 1938, nor any more recent proofs of existence for dinitratomethane. Google Scholar returns only a couple of entries one of which is [1], and another one is a PhD thesis. There are also zero Ngrams for "dinitratomethane", which is unusual. ChemSpider also lists this compound as nitrooxymethyl nitrate (CAS 38483-28-2).

Can anyone approve or disapprove the existence of dinitratomethane $\ce{CH2N2O6}$ (feel free to utilize computational chemistry too)?

After some more research I'm pretty much convinced in its existence. As Mithoron noticed in the comments, the name dinitratomethane is somewhat confusing, and is indeed not preferred.

I suppose the most accurate IUPAC-compatible one would be (nitrooxy)methyl nitrate. It also turned out that in the literature (mostly on regulated and hazardous chemicals) this compound is generally known as methylene glycol dinitrate.

The second volume of a classic handbook "Chemistry and Technology of Explosives" [1, p. 155] gives the most extensive description I discovered (reference numbers are updated):

It is a strong explosive, capable of dissolving collodion cotton. However it is not stable, being readily hydrolysed and therefore it is of no practical significance.

A method of obtaining this explosive, by the nitration of moist paraformaldehyde was patented by Travagli and Torboli [2]. They utilised the well-known property of formaldehyde of reacting like methylene glycol in the presence of water.

According to Travagli [3,4] methylene glycol dinitrate is obtained as follows: paraformaldehyde is dissolved in sulphuric acid and added drop-wise at $\pu{3-5 ^\circ C}$ into a mixture of nitric and sulphuric acid. The resulting oil is separated and washed with water to give a final yield of $35\%$.

The recent handbook of liquid explosives from 2015 [5, p. 227] contains virtually the same information without any updates, which indicates there simply hasn't been much of an interest in this compound due to its instability and lack of possible applications.

5
Does the compound KFO₃ exist?
8
Does this C17H28 isomer exist?
7
Why does formaldehyde exist primarily as the gem-diol in aqueous solution?
6
Why do chromyl bromide and chromyl iodide not exist?
59
Why doesn't H₄O²⁺ exist?