Does it matter which end of a chain one sets to be 1 when drawing the structure of organic compounds?

For example, if I were to draw the structure of 1,2,4-trimethylcyclohexane, then would one or both of these be wrong? 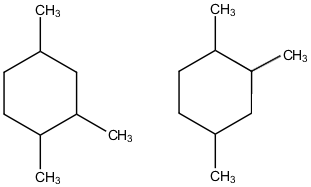 Or are both right? I'm wondering if it matters where I start to count from 1 in these cases, if there is some convention to it or if it doesn't matter much.

Both of those are the same molecule (flip the one on the left over its horizontal axis, and they are identical). It does matter where you start counting from, because the numbers chosen for the functional groups should be as low as possible:

Numbering of the chain. This is done by first numbering the chain in both directions (left to right and right to left), and then choosing the numbering which follows these rules, in order of precedence:

17
Are there notable organic compunds which look very similar but have very different properties?
3
Designing synthetic route to dicarbonyl compound
1
Stereogenic C and enantiomers
13
Correctness of writing H3C as opposed to CH3 in a carbon chain
2
Number of resonating structures (hypothetical)
17
What is the correct way to illustrate a bond to something irrelevant in a structural formula?
0
How exactly do we superimpose molecules while checking optical activity?
4
For two compounds that are symmetrical, why does the more compact one have a higher melting point?
0
Regarding acid-base reactions, how does one know when a hydrophobic base substance is fully protonated?