In example 1.1, it is written that en which occupy only adjacent positions.....is it true for any bidendate for octahedral isomer?

Its not impossible to have a trans-spanning ligand, but they seem to be rarer than cis-ligands due to their increased length and greater potential for steric strain. While en is too small of a ligand to reach trans-positions, it is possible with significantly longer ligands.

It seems octahedral ones are even rarer than their square planar counterparts, but there has been at least one reported synthesis of a trans-spanned octahedral$^1$ that I could find. In the linked paper, they report the synthesis of trans-$\ce{[Ru(Cl)(trpy)(C3SPAN)]}$ where trpy = 2,2:6,2-terpyridine and C3SPAN=$\ce{Ph2PC6H4CH2O(CO)(CH2)3(CO)OC6H4PPh2}$. 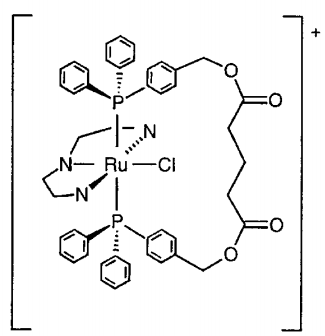 Not the answer you're looking for? Browse other questions tagged stereochemistry coordination-compounds or ask your own question.

1
Equilibrium between R and S configuration?
1
Constitutional Isomers or Stereoisomers?
5
How many stereoisomers are possible for hepta-1,6-diene?
4
Proton-decoupled phosphorus spectrum of a ruthenium complex
2
Number of stereoisomers of 3-ethylpent-1-ene-1,4-diol
3
Defining a stereospecific reaction
12
What is the reason of the color difference for the cis/trans isomers of tetraamminedichloridocobalt(III) chloride?
3
How did they assign absolute configuration to these cis and trans 2-methylcyclohexanols?
6
Optical Isomerism in Coordination Compounds of type MA₂B₂(CC)
1
How many structural isomers does 1,2-dimethyl-cyclohexane have?