How to assign priorities around the asymmetric carbon with its substituents having multiple bonds?

How do I assign priorities to substituents with triple bonds? 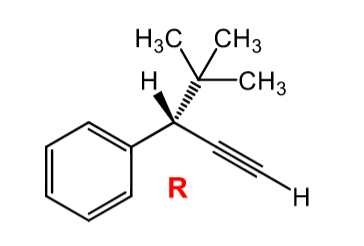 If we take a look at the molecule above, the atom directly bonded to the asymmetric center is carbon for all three substituent.
Moving on to the atoms connected to those carbons, benzene side has carbons attached by a double bond and a single bond. The double bond is counted twice and the atoms count as $\ce{C, C, C}$. For the sp carbon on the lower right, it is triple bonded to its neighboring sp carbon, so it counts as $\ce{C, C, C}$ as well. The tert-butyl group is bonded to three carbons from methyl groups, so this gives another $\ce{C, C, C}$ making it a tie again.
If we look at the next set of atoms, the tert-butyl group has methyl groups so it's $\ce{H, H, H}$, giving it the lowest priority.
However, I'm not sure how to count the next set of atoms for benzene and the triple bond containing group. Judging from the R, S configuration the benzene group should have a higher priority, but I'm not sure how to figure that out. What should be my next step?

I would like to add a diagram to supplement @Raven's response and add a caveat about flipping structures to make R,S-assignments. The C's are the phantom carbons from the double and triple bonds. Working outward from the center of chirality, the first shell (in red) does not allow a decision to be made. At the second shell (in blue) the tertiary-butyl group drops out of the race and becomes the third priority group ahead of the hydrogen (4th priority). The third shell (in green) assigns the benzene ring as the top priority because the acetylene group has "run out of room" and must settle for second priority.

Flipping structures often result in drawing the enantiomer when one tries to place the lowest priority group in the rear. Leave the structure where it is and use your hands to determine chirality. Point your thumb from the chiral center to the lowest priority group. Curve your fingers so that they point in the direction 1 --> 2 --> 3. If you come up with 3 --> 2 --> 1, you are using the wrong hand! In this case your right hand (Rectus) will do the job. 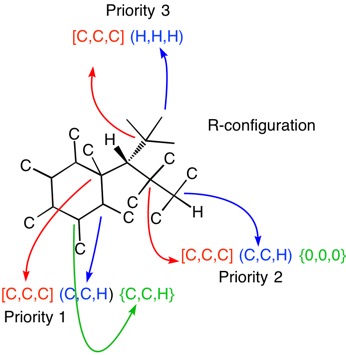 The benzene ring has the highest priority as it has another C connection after the C, C, C tie whereas the others only have hydrogen attached to them.

Therefore the order of priorities is cycling counter clockwise which would mean that it is a S isomer. However for the R, S nomenclature the residue with the lowest priority has to be facing backwards. But in this case the single hydrogen is sticking out the front so that the molecule has to be flipped which then leads to it being am R isomer.