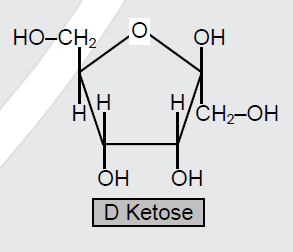 I understand that the compound above is a ketose because it has a furanose ring. But, how do we know that it is a "D" form?

Is there any general rule by which I can identify if any given aldose/ketose is in D/L form?

How do you recognize the D-configuration? Your furanose 1a is in the D-series. Reverse your furanose to the keto form 1b by following the red bonds. Rotate about the $\ce{C4-C5}$ bond by $120^\circ$ as illustrated by the blue arrow in 1b. This rotation produces the Fischer projection 1c having the $\ce{C5}$-hydroxyl on the right. Thus, furanose 1a is of the D-series.

There is another method that can be used with qualification. At any carbon that determines D vs. L in a carbohydrate, as long as the substituents are $\ce{O, CH2OH, CH(OH)C}$ and $\ce{H}$, the D-series will be of the R-configuration. Conversely, the L-series will be of the S-configuration. In furanose 1a, the priorities are $\ce{O>C4>C6>H}$. This determination is easy using this method.

Structures 2a, 2b, and 2c are different representations of $\alpha$-D-glucose. All of the $\ce{C5}$-carbons are, necessarily, of the R-configuration and therefore in the D-series. 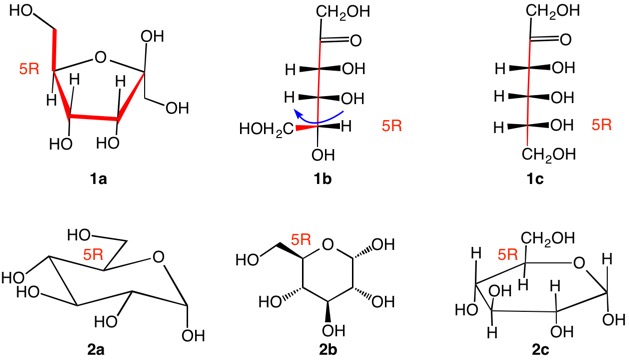 Structures 3a and 3b are Haworth renderings of sucrose. Both the glucose (pyranose) and fructose (furanose) moieties are of the R-configuration and in the D-series.

5
Carbohydrate configurations
7
Stability of furanose vs. pyranose form of glucose?
1
How is this sugar classified as an aldose?
5
Fructofuranose vs fructopyranose
3
Monosaccharides configurations (alpha beta, D L) identification
4
How does existence of alpha and beta form of glucose prove that it exists as a cyclic structure
0
Haworth's research of glucose
0
what is a sugar unit?
0
Pyranose v/s Furanose form of Glucose and Fructose