As usual we are a bit late on this, but here is this month's molecule:

which is known as (4​R,5​S,6​R)-4,6-diacetylhygrophorone A12, and is an antifungal natural product isolated from mushrooms of the genus Hygrophorus.

As far as I know this compound has not yet been synthesised in the lab, but has been isolated and its relative configuration assigned by NMR measurements in anisotropic media.[1]

The criteria are the same as for the last challenge I posted:

Otherwise, any commercially available starting material (as usual, in the Sigma–Aldrich catalogue) is fair game.

(2) The absolute stereochemistry was not assigned in ref 1, so you may synthesise either enantiomer. Obviously, though, that doesn't make a difference to the design of the synthetic route, so I have arbitrarily decided to display this enantiomer (following ref 1).

Establishing the correct stereochemistry proved out to be an extremely difficult task, as I have found only one procedure for these systems. This first scheme is a published procedure:

6) Kinetic resolution by enzymatic O-acetylation, followed by 7) hydrolysis of the acetate and vacuum flash pyrolysis at 450 0C and 0.1 mmHg. The acetate is needed in the target molecule, but I guess that it has to be hydrolyzed before the pyrolysis as to avoid side reactions. 8) is epoxidation with dimethyldioxirane and 9) opening of the epoxide with water provides a intermediate resembling the target molecule a lot (Klomkao, Tet. Asymm. 14, 24, 2003, 3885-3889).

From this molecule starts my approach:

11) The acetonide is hydrolyzed. The primary hydroxyl group is oxidized to the aldehyde and the tertiary one is protected as MOM ether.

The following 3 steps are used for protection of ketone in presence of aldehyde:

12) Aldehyde is protected in presence of enone first.

13) Enone is protected by Noyori conditions.

15) Organocopper addition to the aldehyde in presence of the ester to form a mixture of diastereomers (surely it would show diastereoselectivity but this would need to be tried out).

16) If the diastereoselectivity is bad, the mixture of diastereomers is oxidized to the ketone which is then stereoselectively reduced by chelate-control with zinc-borohydride. This could be problematic as the acetonide oxygens could interfere with chelation, but I cannot predict this with confidence. If they don't interfere much the intermediate would look something like in the image attached at the bottom. The hydryde attacks opposite to the acetonide and the alkyl chain. If acetonide oxygens interfere, then a screening of reducing agents is required.

17) Acetylation of the hydroxyl group and MOM and acetal deprotection should provide the target molecule. 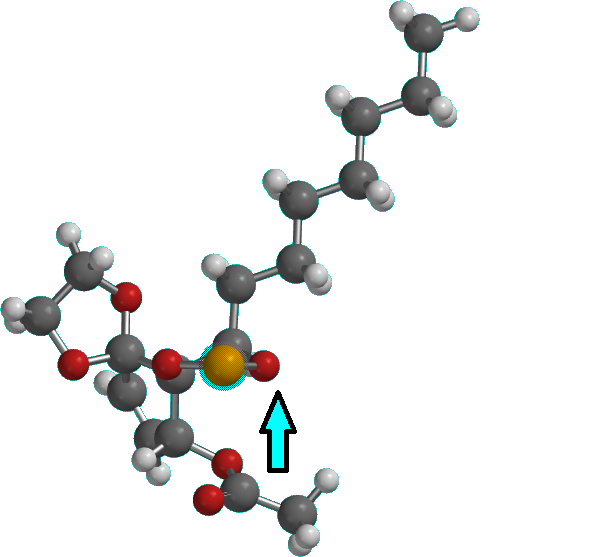 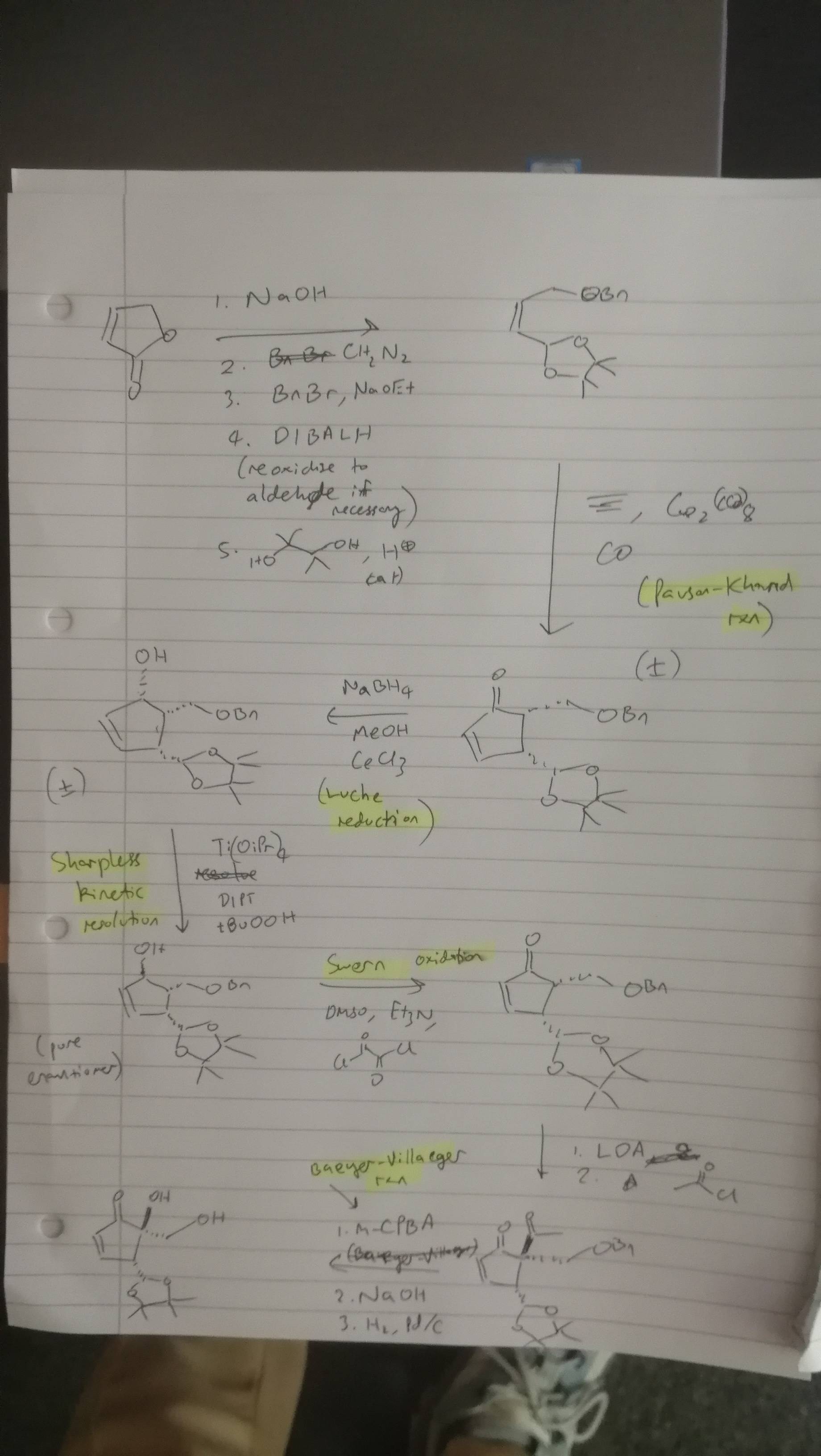 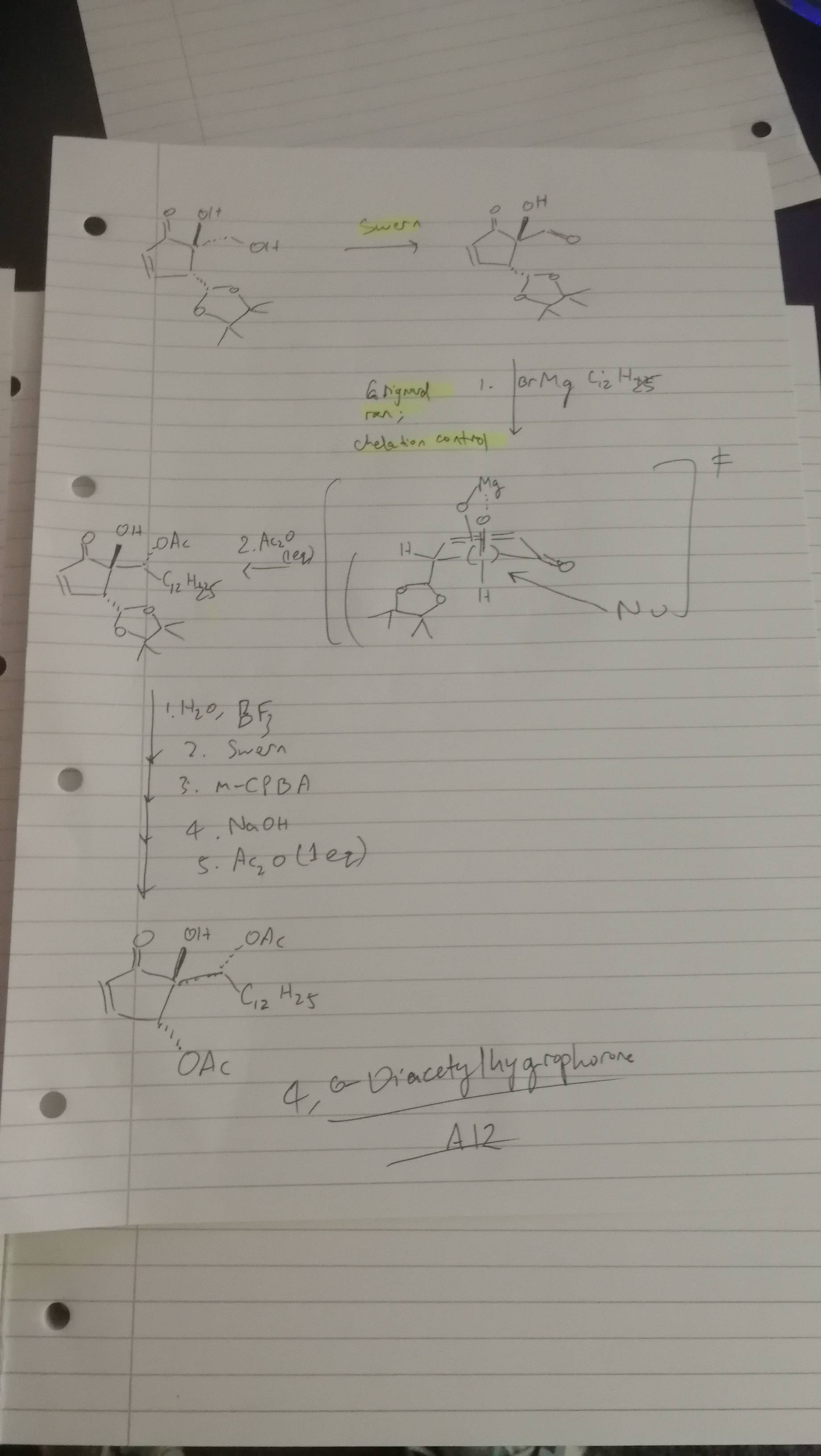