I have a question regarding the solution that has been given.

In the given compound, what would be the order of ease with which hydrogen atom can be abstracted from carbon atoms I to VI?:

The solution that has been given is:

In the solution they've posted above, how is the 2nd structure more stable than the third structure? The third one clearly has resonance with the pi bond, while the 2nd one has no resonance with the oxygen atom (it can't "accept" oxygen's lone pair as it is not a carbocation, and oxygen does not have an empty $\mathrm{d}$ orbital either).

Please can anyone shed light on this issue. Thank you!

Since this question was not answered considering it was posted for a long time, I'd try to give enough reasoning for the given stabilization order.

I'd start with mass spectroscopy. The most widely used technique in mass spectrometry up to date is electron ionization (EI), which produces molecular ions from gas-phase analytes. These molecular ions then fragment in a reproducible way. The energy sufficient for ionizing and fragmenting gas-phase analyte molecules is acquired by interaction with $\pu{70 eV}$ electrons. The range of the ionization energy of most organic compounds are fall between $\pu{10 eV}$ and $\pu{20 eV}$. The most reference spectra are obtained at $\pu{70 eV}$ because at that level the perturbations in electron energy have negligible effects on ion production (Ref.1).

A neutral analyte molecule absorbs energy during the interaction of the ionizing electron with its electron cloud. The analyte molecule interacts with an electron having $\pu{70 eV}$ of kinetic energy, which quickly causes the ejection of one of the electrons from the analyte (it needs to absorbs approximately $\pu{14 eV}$ as internal energy to make this ejection). Because the analyte molecule has many electrons, it is reasonable to ask, “Which electron leaves during the ionization process first?” Whereas sufficient energy may have been absorbed by the analyte molecule to eject any one of its electrons, the most probable ejection will be of an electron that is least tightly bound. Therefore, it is predictable that the most likely site of ionization will be where electrons are loosely bound (e.g., in the nonbonding orbital of a heteroatom) (Ref.1): 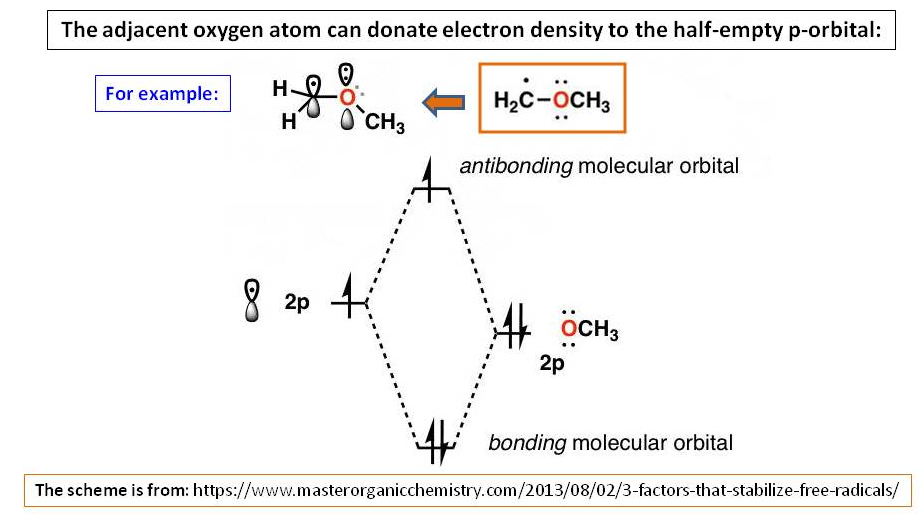 Again, after all, molecular ion of ketone stays as $\ce{R2-C=O^{.+}}$ in EI-mass spectrum of a ketone, usually with the intensity of ~40% of the base peak. That means $\ce{R-CH=O^.-R'}$ is pretty stable contributor (Recall both carbocations and carbon radicals have the same order of stabilization). Thus, it is safe to say that stabilization by oxygen atom is better than that by a double bond. This conclusion would be supported by user55119's comment (vide supra), which states that (homolytic) bond dissociation energy (BDE) of $\ce{CH3O\color{red}{CH2-H}} = \pu{83 kcal/mol}$ while that of $\ce{CH2=CH-\color{red}{CH2-H}} = \pu{89 kcal/mol}$ (Ref.2). Keep in mind that the easiness of BDE is due to the stabilization of the resultant radical (either by oxygen or the double bond).

Not the answer you're looking for? Browse other questions tagged organic-chemistry resonance radicals or ask your own question.