Rate of reaction for hundred reactants

I'd like to programm a toy chemical reaction program. Rough simplifications that deviate from industry and academia are totally acceptable. Not very educationaly accurate, but fun.

Are there methods to calculate rate of reaction for dozens and hundreds of reactants in a closed system? Or I can blatantly use original r = k(T)[A][B] for every pair of reactants while selectively ignoring presence of other molecules? 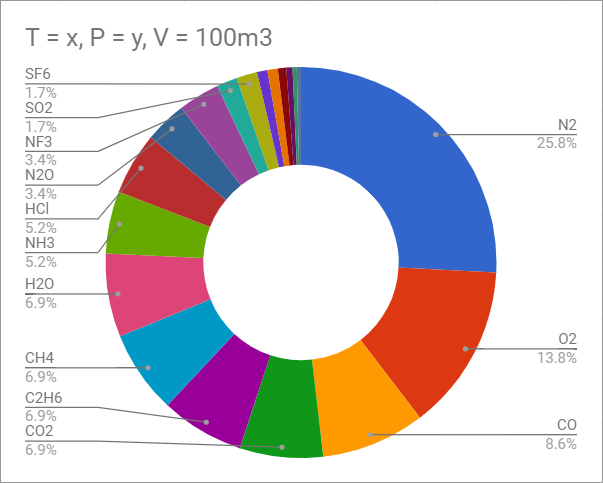 The questions has at least two aspects to address.

OK. So let's say for simplicity we take $r=k[\ce{A}][\ce{B}]$ when the system has only $\ce{A}$ and $\ce{B}$, as we don't need to be quite educationally correct. Then yes, after mixing many reactants, the equation still holds for each pair of the reactants, provided they are elementary reactions. It will be a completely different story if, for example, neither of two of the reactions are elementary and they share the same reaction intermediates.

I also have a reminder that when stepping from the expression of the rate to the expression of concentration with respect to time, you have to be careful and do the integration properly instead of just naively extrapolating the concentration expression when only two reactants exists. Let's say that we don't consider chemical equilibrium for the moment (i.e. consider all the reverse reactions to be prohibitively difficult to happen), then as far as I can see, the $r-t$ curve will not be smooth throughout the time and will have some turning point every time a reactant is fully consumed.

Side note: I suggest that you do your formatting properly in your program for the superscripts and subscripts.

Thus, in principle, any* such system of simultaneous elementary reactions can be modeled using a system of ordinary differential equations of the form:

So yes, if you know the rate constants for all the elementary mono- and bimolecular reactions your reactants can undergo, then you can indeed plug them into a differential equation like the one above and solve it.

However, as a fair warning from someone who's worked on numerically solving these kinds of differential equation systems, they are notorious for often exhibiting high stiffness and consequent numerical instability. This is particularly often the case if some of the reaction constants are much larger and/or some of the reactant concentrations are much higher than others. Efficiently solving such stiff ODE systems is a hard problem, and there's a whole bunch of advanced (and often jargon-filled) mathematical literature on it.

In the end, the practical ways of solving such systems usually come down to timescale separation or other stiffness-reducing approximations, where we essentially assume that certain "fast" reactions occur so rapidly that the concentrations of their products and reactants are always at a local quasi-equilibrium, where the overall net reaction rate of the fast reactions and their reverse reactions is zero. This allows us to then only focus on the remaining "slow" reactions, which are presumably the ones we're actually interested in.

Alas, as a side effect, these approximations also often tend to destroy the mathematical simplicity of the basic elementary reaction model by reintroducing non-elementary reaction laws and/or nontrivial dependencies between the reactant concentrations. Also, unfortunately, at least I know of no general method for automatically constructing such approximations, just as there's no fully general method for efficiently solving the original stiff ODE systems in the first place.

*) At least assuming that the reactions occur in a homogeneous well-mixed environment. Things like reactions occurring on the surface of a substrate can be included by treating the substrate-bound and free forms of a molecule as distinct species and, if necessary, also treating free surface bonding sites as a separate species with its own concentration. Similar tricks can also be used to model e.g. reactions occurring in two immiscible solvents, provided that mixing within each solvent phase can be assumed to be rapid. However, if the reactant concentrations may vary spatially to a significant degree, then one would have to use a reaction–diffusion model instead.

Allright, guys. All I wanted happens to be stochastic simulation.

Tau-leaping can be explicit and implicit. The second one is better for stiff systems. Adaptive Tau-leaping switches between one and the other.

The great mistery is why none of you have mentioned a single algorithm above.

7
CHARMM parameter files for NBD (nitrobenzoxadiazole)
2
Software for chemical reaction simulation in ICE
9
Unique calling code for a chemical reaction
2
Writing Topology file for Ligand for Gromacs
1
Determine rate equations for entire kinetic scheme
0
For what is reaction enthalpy more relevant than reaction free energy?
6
Can ML algorithms be applied to predict the products of a chemical reaction given a set of reactants?
4
Z-Matrix Generator for Gaussian
10
Cauchy-Schwarz inequality for integral derivatives
4
How to construct a QST2 input file for Gaussian16 for multiple reactants and products?