I just read about the theory of auto-catalysis, and here's one thing which is sort of unclear to me:

In this type of catalysis, one of the reaction product catalyses the reaction. For example, in the oxidation of oxalic acid by potassium permanganate, Mn(II) cation is formed which is known to accelerate the reaction. So when potassium permanganate is added to a warm solution of oxalic acid in presence of dilute sulphuric acid (acid medium catalysis), initially there is a time lag before decolourisation occurs. As more permanganate is added, the decolourisation is observed to be nearly instantaneous.

(1) There are several web sites giving details of this reaction and so this need not be copied out here.

(2,3) Rather than describe a complex reaction scheme it is easier to understand a generic autocatalytic reaction. The general autocatalytic reaction of species A with catalyst B has the form $\ce{A + B $\to$ P + 2B}$ and the rate equation is deceptively simple and is $da/dt =- kab$ if $a$ and $b$ are the concentration A and B. The important point here is that species B is both reactant and product. As more B is produced than that there initially, the reaction accelerates as it proceeds. This is the reason for the time lag: the reaction rate is initially small but as reaction proceeds the extra B produced speeds it up. Eventually A runs out and so the reaction stops. (The colour change you mention is just a measure of the concentration of permanganate. Note also that from the Beer-Lambert law describing transmission of light the absorbing species concentration is related exponentially to light transmission (and so absorption) and this probably complicates what you observe by eye).

which produces two log functions when integrated. The initial conditions are $x = a_0$ when $t$ = 0 then the integration constant is $\ln(a_0/b_0)$ and the rate equation, 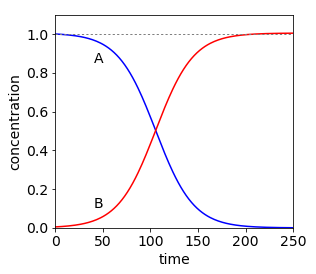 Figure Autocatalysis $\ce{A + B $\to$ P + 2B}$. Initially species A decreases slowly as the concentration of B is small. As the reaction proceeds, more B is produced and although A is reduced overall, the rate increases and A is consumed even more rapidly. At longer times, the concentration of A becomes so small that even though that of B is large the reaction rate is slow.

Not the answer you're looking for? Browse other questions tagged reaction-mechanism kinetics catalysis surface-chemistry reaction-coordinate or ask your own question.

6
What is the reaction between oxalic acid and potassium permanganate?

3
Calculating Vmax (or Kcat) given specific activity of an enzyme over length of time incubated with an activator
3
Effect of Catalysis on Reaction Rate in elementary Reaction
5
How to inhibit Mn2+ autocatalysis in the oxalate-permanganate reaction?
1
How does changing volume affect concentration of solutions?
6
Synthesis of Potassium Trioxalatoaluminate (III) Trihydrate
1
Determine reaction rate constant from the reaction time?
0
Reaction mechanism of redox reaction
1
Can an iodine clock reaction work without using a strong acid?