Why is thiourea a monodentate ligand?

I was going through a list of monodentate ligands, and I came across examples like $\ce{H2O}$ (which has 2 lone pairs), $\ce{Br-}$, $\ce{I-}$ (both of them have more than one lone pair). Similarly, thiourea has 4 lone pairs in all (2 from nitrogen and sulphur each).

When I searched about it, I realized that the oxygen in water can't simultaneously form bonds using both the lone pairs (due to some obvious geometrical reasons, it said).

However, I couldn't figure out any such (obvious) reasons in thiourea.

Can anyone please help?

This is not really a standalone answer, rather a pointer or an exeption. There are few complexes where deprotonated thiourea $\ce{S=C(NH2)NH}^-$ acts as a bidentate ligand. One example is (aminomethanethioamido)-hydrido-tetrakis(trimethylphosphine)-technetium(III) $\ce{[Tc(P(CH3)3)4(SCN2H3)]+}$ complex[1]: 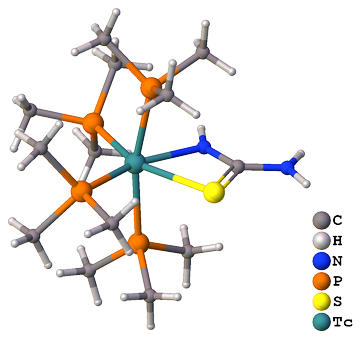 The fact that thiourea ligand is deprotonated and is coordinated asymmetrically within equatorial plane in $\eta^2-\ce{N,S}$ bonding mode has been proven by NMR and SCXRD studies. From the article [1, p. 4642] (emphasis mine; $\ce{tu}$ = thiourea $\ce{S=C(NH2)2}$):

As Martin pointed out, the reasons for the observed denticity are not always transparent. Simply put, it seems like in this case in order to be a bidentate ligand, thiourea molecule needs to increase its nucleophilicity and remove steric hindrance caused by $\ce{H}$-atoms lying within the $\sigma_\mathrm{h}$ plane. Both can be achieved by eliminating a single proton from the thiourea molecule.