I have studied the Reimer–Tiemann reaction of phenol with chloroform in presence of aqueous strong alkali. It takes place with intermediate dichlorocarbene.

I have also studied the Reimer–Tiemann "carboxylation" reaction, which requires carbon tetrachloride, and proceeds with intermediate carbocation.

I am however unfamiliar with what the following question requires from me:

Can anyone please state the step-wise mechanisms through which this reaction occurs? Thanks!

This is not really an answer to your question, but I do not think that it is possible to answer it. From one of the many comments we learn that the reference is actually the "preparation of piperonal". It uses 3-4-dihydroxy-benzenecarbaldehyde instead of catechol, but the reaction is same, with $\ce{CH2I2}$ and $\ce{NaOH}$.

I was able to find this reaction described in Chemistry of Natural Products by Sujata V. Bhat, B.A. Nagasampagi, Meenakshi Sivakumar on pages 307f.

Piperine was synthesized (Ladenburg, 1894) by the reaction of the piperic acid chloride with piperidine, which confirmed the structure of the molecule (Figure 4.57). The synthesis of piperic acid was achieved starting from piperonal 4.288, which was obtained from catechol using Reimer-Tiemann reaction followed by the condensation with diiodomethane in the presence of a base. Piperonal was condensed with acetaldehyde in the presence of sodium hydroxide and the product obtained was then heated with acetic anhydride and sodium acetate to yield piperic acid. 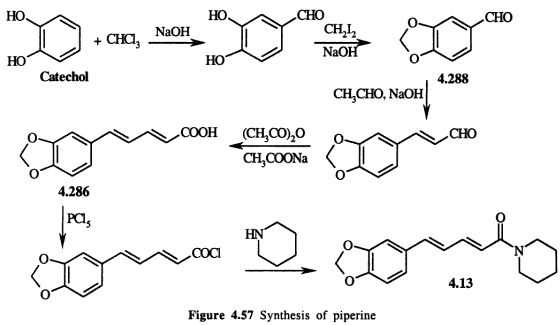 I find this a lot more in accord from what you would expect. I cannot imagine any way in which a Reimer-Tiemann (RT) like reaction would occur given the starting reagents. Instead the first step from catechol to 2,4-dihydroxy-benzenecarbaldehyde occurs via an RT reaction. This is very well discussed by H. Wynberg (Chem. Rev. 1960, 60 (2), pp 169–184, DOI: 10.1021/cr60204a003). The mechanism can also be found on Wikipedia.

However, since there is proof that the reaction with 2,4-dihydroxybenzenecarbaldehyde forms the acetal, it would be highly suspicious if it were not doing a similar reaction with catechol.

Catechol does react with diiodomathane in presence of $\ce{NaOH}$ as the base. But it does not perform Reimer-Tiemann reaction, but instead it forms methylenedioxybenzene (2H-1,3-Benzodioxole is the preferred IUPAC name according to Wikipedia). As Martin - マーチン notes in his answer, this reaction is most commonly found in the synthesis of piperonal, but the same reaction can also be used for catechol.

The mechanism is similar and instead of diiodomethane, you can also use dichloromethane, dibromomethane, methylene sulphate and methylene chlorobromide. As this paper explains:

The ionizing base for catechols has always been an alkali hydroxide, alkoxide, or carbonate; the methylenating agents have variously been methylene iodide in alcohol or acetone, methylene bromide, 'methylene sulphate', methylene chlorobromide, and methylene chloride. The best yield (69%) of benzo-1,3-dioxole was obtained with methylene iodide, methanolic potassium hydroxide, catechol, and copper bronze, heated and shaken together at $\pu{100-110°C}$ for $\pu{18 hr}$ in a sealed tube. The yield from methylene chloride with these conditions was 53%.

From the same paper:

The formation of benzo-1,3-dioxole probably proceeds in two steps:

Another paper also mentions the reaction between catechol and diiodomethane with methanolic $\ce{KOH}$.

The reaction mechanism is $\mathrm{S_N2}$ so the mechanism provided by Martin - マーチン in his answer should be correct. In case his answer is deleted or modified in future, I am providing a simple mechanism with catechol and diiodomethane only:

Not the answer you're looking for? Browse other questions tagged organic-chemistry aromatic-compounds phenols or ask your own question.