Why do we get slightly more inversion product than retention product in SN1 reaction?

Theoretically, in $\mathrm{S_N1}$ reaction we should get a racemic mixture as the product because the nucleophile can attack from either side of the formed carbocation.

However, many textbooks claim that there's slightly more inversion product than retention product.

Is there any specific reason for this to happen.

It is well known that SN1 reactions often give incomplete racemisation:

Although many first-order substitutions do give complete racemization, many others do not. Typically there is 5–20% inversion, although in a few cases, a small amount of retention of configuration has been found. These and other results have led to the conclusion that in many SN1 reactions at least some of the products are not formed from free carbocations but rather from ion pairs.

We can explain this by realising that the SN1 and SN2 mechanisms are not really discrete, as often taught, but rather two extremes of a 'mechanistic continuum'. This has implications for both the stereochemical outcome of many substitutions (i.e. proposed SN2 are not always as stereospecific as one might expect), and also the kinetics (i.e. measuring the rates of substitutions won't always give data consistent with purely SN2 or purely SN1 mechanisms).

This mechanistic continuum was first explained by Winstein, who studied both the kinetics and resulting stereochemistry of nucleophilic substitutions at saturated carbons.[1] This model is widely accepted, though rarely taught at the undergraduate level.

Winstein's theory proposes the presence of several additional intermediates along the reaction coordinate- these are known as 'ion pairs' and represent varying levels of association between the reagent and the leaving group. The energy levels between these ion pairs are small, and nucleophilic attack can occur at any stage (hence the continuum). 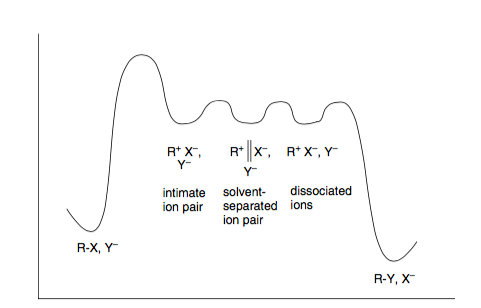 The Winstein model fits with what is commonly taught, namely that SN1 gives racemisation and SN2 gives inversion:

The interesting case is where nucleophilic attack occurs on a solvent separated ion pair - we see neither complete inversion nor complete racemisation, as some association still exists at this stage (partially, but not completely blocking one face of the cation).

Modern Physical Organic Chemistry[3] gives an overview of all of the possibilities, though the figure is a little hard to follow: 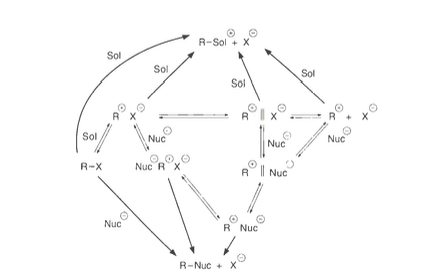 In an ideal condition, where a "free" carbocation is generated, the amounts of R and S isomers of the products will be exactly 50% each, provided that there is no steric hindrance in one side that makes the formation of one isomer advantageous. In simple words, if both sides of carbocation is similar, then 50% of each isomer should be produced.

In practice, few $\ce{S_N1}$ reactions give the expected $\ce{50:50}$ mix of enantiomers, and inversion of configuration exceeds retention to an extent of up to $\ce{\approx20\%}$. This probably occurs because the 'real' mechanism involves a transition state in which the carbenium ion and the leaving group are still loosely bound by electrostatic interactions, making attack from the side opposite to the leaving group less sterically hindered than attack from same side. In other words, the 'real' $\ce{S_N1}$ mechanism involves a transition state that lies somewhere between the two extremes that we have described for the $\ce{S_N1}$ and $\ce{S_N2}$ pathways.

Not the answer you're looking for? Browse other questions tagged organic-chemistry reaction-mechanism nucleophilic-substitution stereoselectivity or ask your own question.

4
Is the SN1 reactions stereospecific or stereoselective?
1
Do SN1 reaction always result in Racemisation

18
Designing a theoretical synthesis of methamphetamine from phenylpropyne
3
How to decide between different possible substitution/elimination mechanisms under given conditions?
3
Deciding E1/E2/SN1/SN2 for cyanide ion
4
Comparing SN2 reaction rate for phenacyl chloride and methyl chloride
6
Why is the alkene a more stable species in this case?
4
Formation of enamine for unsymmetrical cyclohexanone derivatives
8
Nucleophilicity of sterically hindered enolates