Quadrupole MS: mass as a function of voltage

Every time I see an article about Quadrupole MS (e.g. here), they give formulas like:

I suppose the instrument changes voltage and keeps the rest constant, but I failed to find any article that would show direct formulas on how to calculate m/z from that. I could rearrange it like this:

PS: this question is about Quadrupole MS though it looks to me that Ion Trap MS has very similar concepts and math.

An analogy might be to the Reynolds number for characterizing fluid flows. It, like $a$ and $q$, is a non-dimensional number that depends on properties of the molecules under study and on the system geometry. Knowing just the value of the Reynolds number is useful for understanding some of the general characteristics of a flow, but if you want to compute fluid motion, i.e. the velocity profile in a pipe, you still have to solve the Navier-Stokes equation.

For quadrupole mass analyzers, only certain regions of $a$-$q$ space result in stable ion trajectories (i.e. where ions don't collide with the surfaces of the four rods in the quadrupole). This map shows which values for $a$ and $q$ result in stable solutions to the Mathieu equations, and thus is called the Mathieu stability diagram. The same document you linked to shows an example of such a diagram: 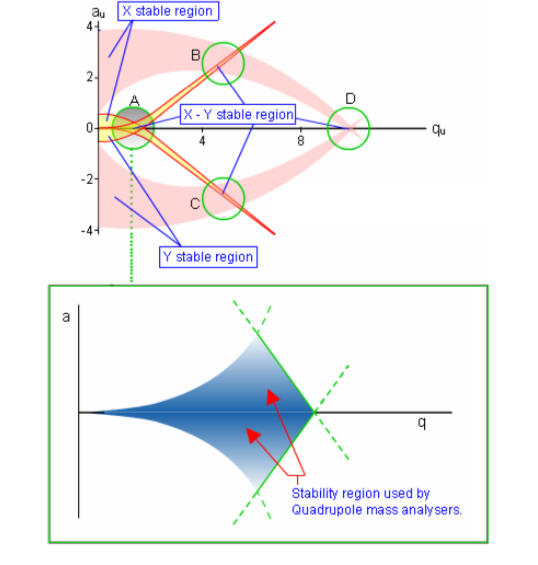 Thus, to compute $m/z$, we need to impose the criterion that $a$ and $q$ are in a stable region of the stability diagram, more specifically in the region "A" shown in the diagram. By rough eyeballing, the "middle" of this diagram corresponds to about $q = 0.75$ and $a = 0.07$ or so. You can use either of those values to estimate $m/z$, but a more precise estimate, including line-widths etc., would require knowing both.

Not the answer you're looking for? Browse other questions tagged analytical-chemistry mass-spectrometry or ask your own question.