Why does copper form bubbles in vinegar in this situation?

I watched this video in which the host tries to show the principles behind the voltaic pile.

The host first immersed zinc in vinegar and bubbles are observed forming around zinc. I've learned that this is because hydrogen ions in vinegar get electrons from zinc atoms and become gaseous.

Then the host take a conductor and attach at one end the piece of zinc and at the other a piece of copper. Bubbles start to form around copper too! (fig1) 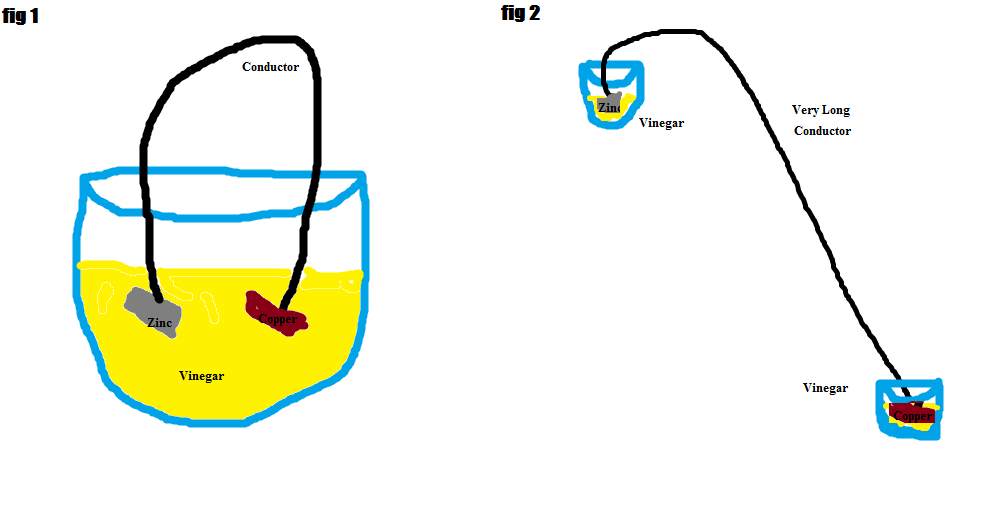 When you put a zinc rod in a acid solution containing $\ce{H^+}$ ions, the zinc piece loses $\ce{Zn^{2+}}$ ions to the solution leaving electrons behind. These electrons attract hydrogen atoms to the zinc rod, and an electron transfer occurs, resulting in bubbles of hydrogen forming on the surface of the zinc. However, the evolution of gaseous hydrogen from zinc surface is rather slow, and that is why pure zinc reacts slowly with dilute acids.

The situation changes when a copper,or any other metal less electropositive than hydrogen is attached to zinc, by a wire. The copper can now be considered as an extension of the zinc rod: a place form where hydrogen can take electrons quickly and become gas. As the rate of evolution of hydrogen from the copper piece is faster, hydrogen bubbles out from the copper piece. This does not mean, however, that the zinc stops reacting with acid; it does, but at a very slow rate.

Copper has no place in the reaction.

So, to answer your questions,

This happens because copper can do away with the electrons quicker than zinc, and when electrons get a pathway, they will take the pathway.

Why do some electrons travel through the conductor instead of being attracted immediately by the hydrogen ions in the vinegar?

Well, some electrons do attach to H+ ions from vinegar directly, and hydrogen bubbles should form on the zinc plates, although they are less in amount. And I believe my earlier explanation answers this question.

What if the conductor instead was very long and the pieces of copper and zinc far apart?

It does not have anything to do with distance. If you take a large solution, the reaction will certainly occur. On the other hand, if you separate the poles into two solutions the copper rod will not give off electrons as the circuit is not complete. Think about it this way, if the reaction was to occur, the solution with zinc will become progressively positive and the solution with copper will become negative. This can never happen.

(1) As per your comment below, I now attempt to answer the question "What makes copper better than zinc in releasing electrons?"

The answer lies in a factor called overpotential, sometimes referred to as overvoltage. There is one type of overpotential which is important in this case— activation overpotential. This is caused due to the fact that when hydrogen atoms are produced on the surfce of a metal ($\ce{H+ +e-> [H]}$), they take some time before they can combine to form diatomic hydrogen and some more time before the hydrogen molecules can be released as gas. This results in the formation of a layer of hydrogen on the surface of metal effectively reducing the rate of reaction and halting it; this effect is known as polarization.

(2) I mentioned in the beginning of my answer that pure zinc reacts with dilute acid slowly. Commercial zinc, on the other hand, reacts quickly with acids, owing of the same effect of polarization. In commercial zinc, impurities of other metals form cathode and the pure zinc forms anode in the acid medium, essentially producing a galvanic cell, where the anode and cathode are connected. Thus the reaction occurs quickly, without the hindrance of polarization.

Copper is cathodic when the galvanic circuit is formed. In the acid solution hydrogen ions are reduced at the cathode.

To set up the galvanic cell and make hydrogen evolve from both ends you have to connect the electrodes through the electrolyte (or via a salt bath). Figure 2 does not have a complete circuit, so it gives no reaction except zinc dissolving chemically.

2
Do some electrons transfer if I connect with a conductor 2 solid pieces of 2 different elements with different electronegativity?

52
Why is it important to use a salt bridge in a voltaic cell? Can a wire be used?
8
Why put zinc solution in a galvanic cell?
6
Why do Electrons leave the Zinc in a Galvanic Cell
3
Why does the cathode have to be made out Cu in a Zn-Cu voltaic cell?
5
Formation of species in electrolysis
1
Bubble formation when aluminium reacts with copper(II) sulfate solution
1
Why is hydrogen evolved at the copper side of a lemon battery?