What are angular and radial nodes?

Nodes are the points in space around a nucleus where the probability of finding an electron is zero. However, I heard that there are two kinds of nodes, radial nodes and angular nodes. What are they and what information do they provide of an atom?

The accepted answer has nice pictures, but has a couple of small factual inaccuracies in the last paragraph. In particular, it is not necessary for an angular node to be a plane (even though it frequently is). Here's a bit more maths to illustrate what's going on.

Atomic orbitals, which are one-electron wavefunctions, are split into two components: the radial and angular wavefunctions

so-called because they only have radial ($r$) and angular ($\theta$,$\phi$) dependencies respectively. If either of these two components are zero, the total wavefunction is zero and the probability density there (given by $\psi^*\psi$) is also zero.

Analogously, an angular node is simply a region where the angular wavefunction is zero.* In the case of the p-orbitals, this is a plane. However, angular nodes do not necessarily have to be planes, as we'll see later.

The number of radial and angular nodes is dictated by the forms of the wavefunctions, which are derived by solving the Schrodinger equation. For a given orbital with quantum numbers $(n,l)$, there are $n-l-1$ radial nodes and $l$ angular nodes, as previously described.

All the individual terms in the radial wavefunction can never be zero (excluding the cases of $r = 0$ or $r \to \infty$ as I described earlier). Therefore, this orbital has no radial nodes. Surprise, surprise. 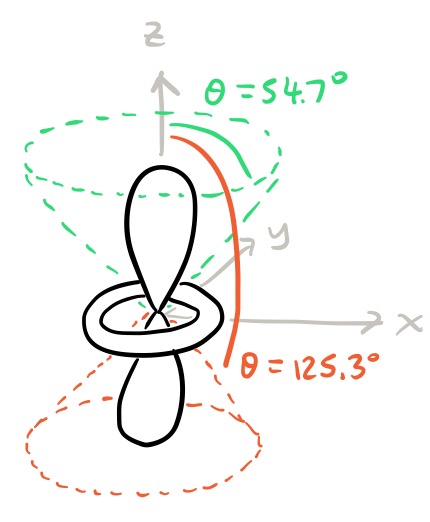 The dotted lines are the angular nodes. They are not planes, but rather cones. They correspond to one particular value of $\theta$, which in spherical coordinates is the angle made with the positive $z$-axis; I have marked these angles on the diagram.

If you can obtain the forms of the wavefunctions, then it is easy to find the radial nodes. Mark Winter at Sheffield has a great website for this; just click on the orbital you want on the left, then "Equations" near the top-right corner.

1. How to get the number and type of nodes for an orbital

As you said, nodes are points of zero electron density. From the principal quantum number $n$ and the azimuthal quantum number $\ell$, you can derive the number of nodes, and how many of them are radial and angular.

So each type of orbital ($s, p, d$ etc) has its own unique, fixed number of angular nodes, and then as $n$ increases, you add radial nodes.

For the first shell, $n=1$, which means the number of nodes will be 0.

2. The difference between radial and angular nodes

Radial nodes are nodes inside the orbital lobes as far as I can understand. Its easiest to understand by looking at the $s$-orbitals, which can only have radial nodes. 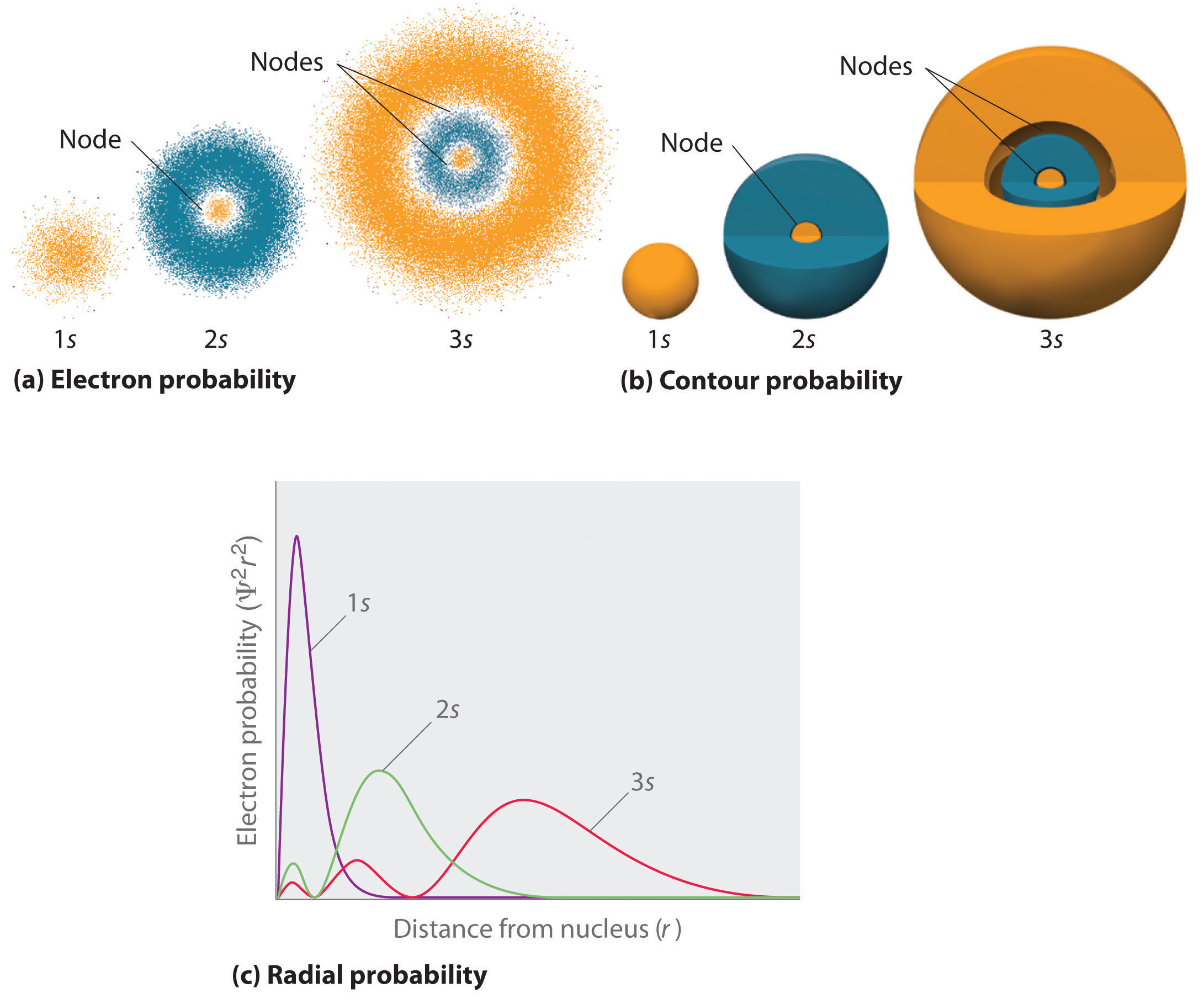 To see what an angular node is, then, let's examine the $2p$-orbital - an orbital that has one node, and that node is angular.

If you vibrate a piece of rope then it is quite easy to show that nodes will appear, and when standing waves are produced the nodes are fixed in space and time. Between the nodes the rope oscillates up and down. The n$^{th}$ harmonic has $n-1$ nodes. The more nodes there are, the greater is the energy is required to produce them. In a vibrating rectangular membrane nodal lines are produced and in a vibrating disc nodal rings. The nodal lines, where the amplitude is zero separate normal vibrational modes.

Similarly with atoms and molecules. Nodes are points where the wavefunction crosses zero, and its amplitude is zero. Where the wavefunction gradually approaches zero (at the origin or infinity) are not considered nodes. Nodes naturally appear in all solutions of the Schrodinger equation, even for simple systems such as a particle in a box. Not all wavefunctions have nodes, the lowest energy one does not, (e.g. the S orbital in atoms, zero point vibration and zero rotation in molecules, lowest MO in a molecule). The larger the number of nodes a wavefunction has the greater the energy eigenvalue. Some pictures of wavefunctions and nodes has been given in the answer by @Brian.

There appears to be no special significance to a node, it arises purely out of the solution of the Schrodinger equation and is a consequence of the solutions (hence boundary conditions) we choose to obtain quantisation. Without nodes it is difficult to see how wavefunctions describing different energy eigenvalues could be constructed.

Briefly extending the question to include bond formation. In forming bonds from atomic orbitals the parity of the wavefunction is important. Upon interchanging coordinates, i.e. inversion operator, odd parity (ungerade, u) produces -1 itself and even parity (gerade, g)leaves the orbital indistinguishable. The node in a p orbital causes it to have odd parity, as s orbital even. The symmetry (parity) determines whether two orbitals can combine to form a bonding orbital or anti-bonding one, e.g. $\sigma$ or $\sigma ^*$ or $\pi$ or $\pi ^*$. Anti-bonding orbitals always have nodes.
Nodal planes are also important in Diels Alder addition and similar reactions as here symmetry is important. In spectroscopic transitions in molecules, the nodal structure of the molecular orbitals determine, via symmetry, which transitions are allowed or forbidden.

Not the answer you're looking for? Browse other questions tagged physical-chemistry orbitals or ask your own question.

15
Difference between radial, planar, angular and spherical nodes
5
What is the correctly diagrammed electron probability distribution for p orbital?
1
Why there are nodes in orbital?
0
Does the radius of the atom change when an electron is excited?
1
What are angular nodes?