What's the mechanism of the reaction of (E)-methyl 3-(furan-2-yl)acrylate in acidic methanol?

In the organic chemistry textbook by Clayden et al. they mention that the reaction of (E)-methyl 3-(furan-2-yl)acrylate in acidic methanol yields dimethyl 4-oxoheptanedioate without providing the reaction mechanism and leaving it to the reader to figure it out:

I've tried for over an hour now but didn't get to this product. I assumed that since the reactant already has the right number of carbon atoms I won't have some kind of dimerization to consider, only reactions involving one molecule of (E)-methyl 3-(furan-2-yl)acrylate. I think, the first step should be a protonation at the furan 3- or 5-position with a subsequent attack of methanol on the carbonyl group that was formed followed by an acetal cleavage. The problem is that I don't know how to get the second ester group and how to get rid of all 3 $\ce{C=C}$ double bonds? Unfortunately, I don't have access to ChemDraw on this computer so I can't provide some example mechanisms I came up with.

As Uncle Al already pointed out, the mechanism starts with protonation of the ester carbonyl oxygen. This yields a resonance-stabilized cation whose charge can be delocalized into the furan ring, where it is subsequently captured by nucleophilic attack of methanol in $\alpha$ position to the ring oxygen. 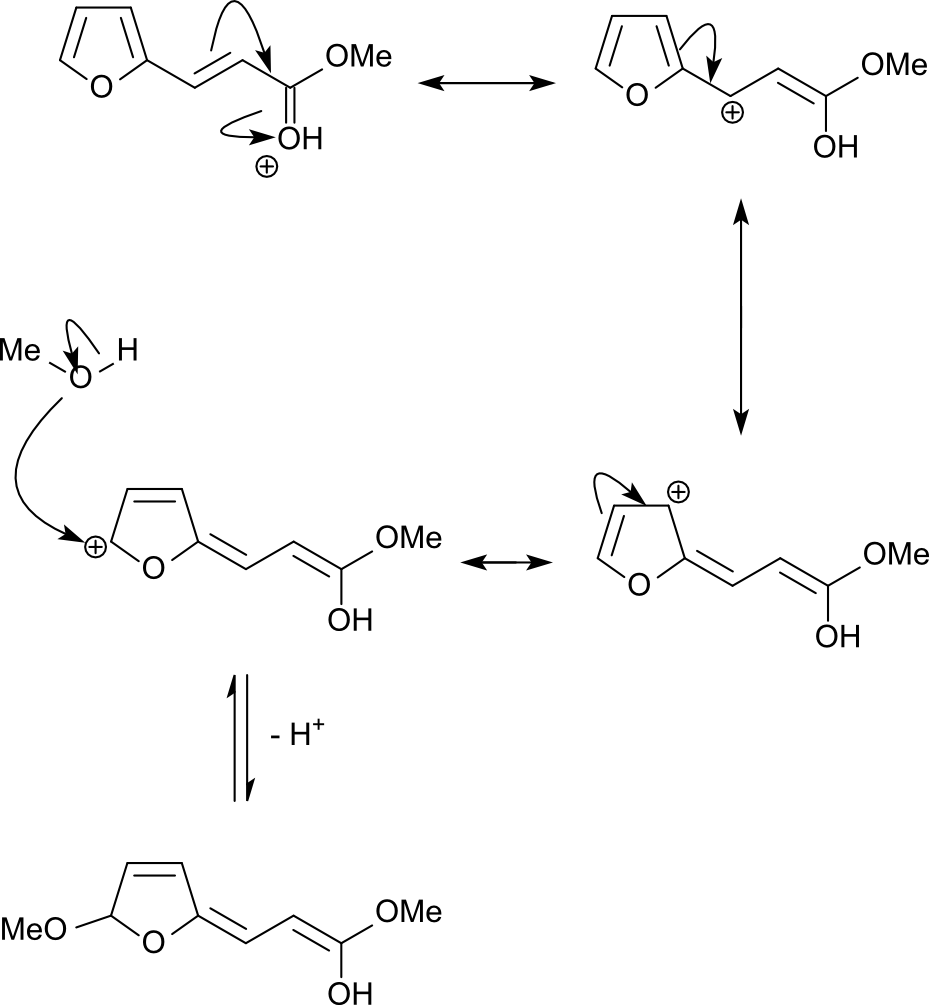 The cyclic acetal thus formed undergoes [1,5]-H shift which is driven by rearomatization of the furan ring. The reactive 2-methoxyfuran is protonated at the 3 position, which yields a resonance-stabilized acetal cation. During aqueous workup, this cation is captured by water, which results in ring opening. The protonated ester carbonyl group is deprotonated by the ketone enolate, and after subsequent keto-enol tautomerization, the final product is eventually obtained. 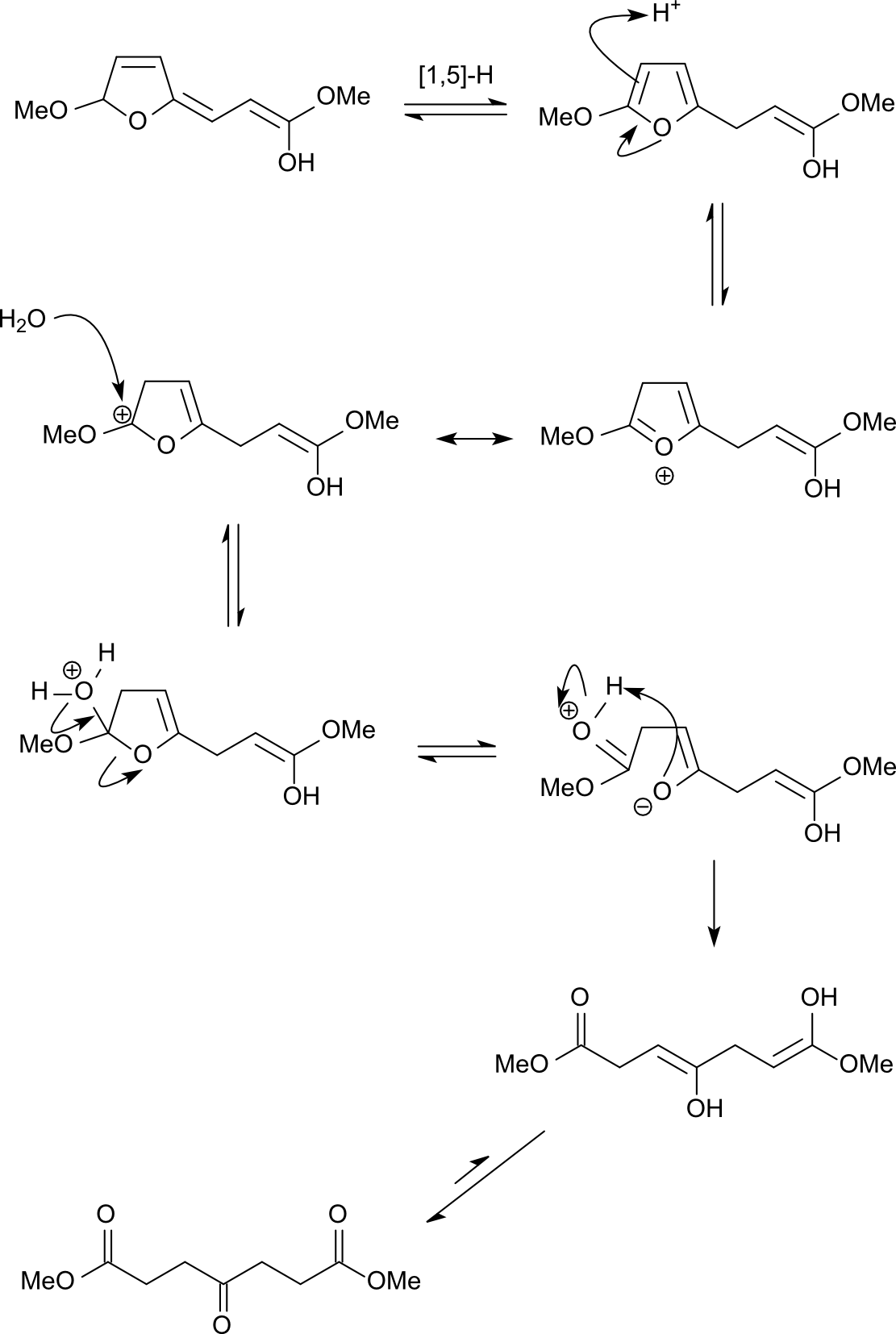 Unfortunately I cannot agree with the currently accepted answer. This 1,5-hydride shift that was invoked seems to have a very strained transition state (the cyclic, planar system means that the "1" and "5" atoms are quite far apart) and with all due respect, I am quite skeptical as to whether it would really work. Furthermore furan does not enjoy a particularly large aromatic stabilisation and "rearomatisation" as a driving force is not too convincing. Furan, in all its reactions, has a very pronounced tendency to lose its aromaticity. For example even nitration with the mild reagent acetyl nitrate ($\ce{AcONO2}$) leads to a 2,5-addition product and you actually need to add a second reagent (pyridine) to eliminate $\ce{AcOH}$ and rearomatise. For all intents and purposes furan reactivity is much closer to that of an enol rather than that of benzene.

Instead of a 1,5-hydride shift, proton transfers should suffice, especially since there are carbonyl groups all over the molecule (i.e. the proton transfer is simply a tautomerism and doesn't go through any particularly unstable intermediates).

One way of thinking about this question would be to try and do it in reverse. 1,4-Dicarbonyl compounds are known to cyclise to form furans in acidic solution, so this should simply be the microscopic reverse of that reaction. The key cyclisation step involves the attack of an enol oxygen onto a protonated carbonyl group. So, in this reaction, the fragmentation step should be the reverse: the ejection of an enol oxygen from a (hemi)acetal.

I would propose this mechanism instead.

So far, this is the same as in the currently accepted answer. However the usage of the furan lone pair to push electrons saves time in drawing all the resonance forms (this is what was meant by K_P's comment also).

Protonation of the furan oxygen (not drawn) brings us to the start of the next step:

As described previously this fragmentation is the reverse of the cyclisation reaction used to generate furans. Following tautomerisation of two of the enols, most of the molecule is already in place and the remaining question is how to generate the second ester functionality. The issue is that the carbon that should become the ester has an extra hydrogen on it. Instead of having a hydride shift it makes much more sense to move it around by tautomerisation!

The ketene acetal can be protonated and attacked by methanol at the carbonyl carbon, but that would be unproductive as there is no way of getting rid of one of the methyl groups on oxygen (unless we invoke a $\mathrm{S_N2}$ reaction on the methyl group with methanol acting as the nucleophile). So, it probably needs to wait until water is added during the reaction workup, at which point it is hydrolysed to give the desired product.

This commentary may be a bit late in the game but some historical perspective may be appreciated. This mechanism question was around when I was a graduate student in the 1960's. The reaction was reported in 1877 by Marckwald.1 He conducted the reaction in 95% ethanol (water present) in the presence of HCl. The diacid of ketodiester 7 was formed by saponification and its composition was confirmed by combustion analysis. The mechanism is no different with methanol and unless methanol is scrupulously dried, the keteneacetal mechanism will not prevail nor will a [1,5]-hydride shift survive. Another point about the mechanisms provided thus far is that enols of ketones and esters, if so regenerated, rapidly tautomerize. 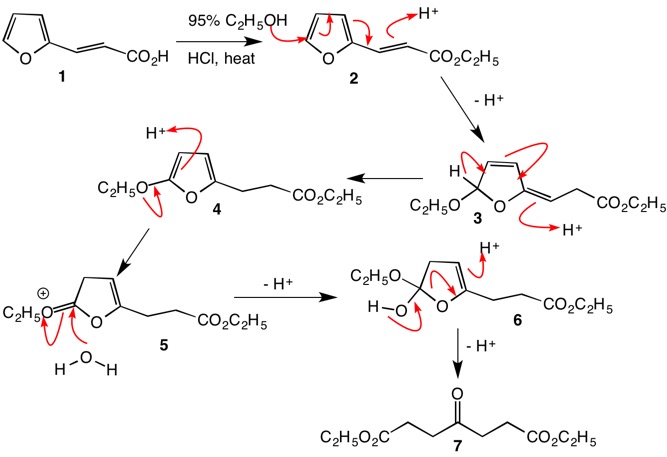 The reaction is catalytic in HCl. Esterification can be effected at any stage of the process, but here, it has been accomplished for convenience in the first step (1 ---> 2). The sequence 2 ---> 4 is a redox reaction in that the double bond is reduced to an alkane while C5 of the furan is oxidized, all through the aegis of a proton. Furans bearing α-alkoxy groups are highly susceptible to acid hydrolysis. Protonation at the β-position leads to facile introduction of water (4 ---> 6). The enol ether 6 is readily protonated causing collapse to Marckwald's keto diester 7. To distinguish between the mechanism presented here and the keteneacetal mechanism presented above, workup in the presence of H2O18 while the reaction mixture is still acidic, will incorporate O18 into the ester carbonyl by rapid deuterolysis of the keteneacetal but not into the esters by the mechanism presented here. Incorporation of O18 into an ester is expected to be much slower than into a keteneacetal.

Starting furan is also a bis-enol ether hiding a terminal aldehyde and an internal ketone. Seven skeletal carbon atoms including that conjugated olefin. Product has seven skeletal carbon atoms and three carbonyls in the right places. The double bond is reduced and what would be the terminal aldehyde is oxidized to the acid, appearing as the methyl ester.

Protonate the ester carbonyl. 1,3 shift of the double bond affords a carbenium ion next to the furan ring and =C(OH)(OR), the enol of the ester. That is downhill in energy for the alpha-cation conjugating to the electron-rich aromatic ring. 1,3 shift of the ring double bond leaves the ring oxygen an enol ether (exocyclic double bond) and moves the charge into the ring. 1,3 shift moves the charge alpha to the ring oxygen (again downhill in energy - resonance contributors), where it is captured by methanol to make an acetal.

Not the answer you're looking for? Browse other questions tagged organic-chemistry reaction-mechanism carbonyl-compounds heterocyclic-compounds or ask your own question.

-1
How is levulinic acid formed from sucrose?