Why is there only one bond length for sulfur hexafluoride?

In sulfur hexafluoride, there are two 3-centre 4-electron bonds, according to the book I am reading (Essential Trends in Inorganic Chemistry by D. P. M. Mingos). The other two fluorines are bonded to sulfur, by interacting with its sp-hybrid orbitals. Therefore, we should expect to observe two sets of bond lengths, one set for those involved in the 3-c 4-e bonds and one set for those involved in the bonds involving the hybrid orbitals. However, only one set of bond length (156.4 pm) is reported on Wikipedia. Why is this the case?

This is an old question and is largely answered in the comments, but here's a full answer for the sake of completeness.

There are really two questions here: 1) is the given bonding orbital description correct for SF6? 2) why is SF6 octahedral?

The first question is easier: no, your description is incomplete as you've described it, but perhaps correct as intended by the author (I don't have the textbook to see the exact wording). It is correct if you explain further that there are three possible representations with two $sp$ bonding orbitals and two 3c/4e bonds. The three different representations look identical except that the $sp$ orbitals are aligned on different Cartesian axes (ie one for $x$, one for $y$ and one for $z$). The true structure is a composite of these three, meaning that each S-F bond is 1/3 $sp$ and 2/3 3c/4e (which is essentially 1/2 of a $p$ orbital) which adds up to a total of 2/3 of a bond with a contribution of 1/6 from $s$ and 1/2 from $p$.

I suspect that the textbook uses this representation because it connects readily to earlier discussions of integer hybridization, i.e. "$sp$" orbitals are familiar and easy to visualize. And presumably the concept of a 3c/4e bond has also been previously introduced. Making a composite of familiar concepts is perhaps easier than introducing the idea of delocalized molecular orbitals, but in this case they are simple enough that it's worth going through them to show that the result is the same.

First, the $s$ orbital is spherically symmetric, so it necessarily interacts the same with all six identical ligands. The lowest energy molecular orbital is thus represented by the $s$ orbital on sulfur and the six fluoride ligand orbitals all in the same phase (images below). That's where the 1/6 $s$ comes from. The $p$ orbitals each are able to interact with two of the ligands, one on each end of orbital. The other four ligands do not contribute at all, because they are exactly on the nodal plane of the $p$ orbital. Since each $p$ interacts with two ligand orbitals, each S-F bond gets 1/2 $p$ to go with the 1/6 $s$, exactly the result we got from the composite of hybrids. Below are drawings of the four bonding molecular orbitals: 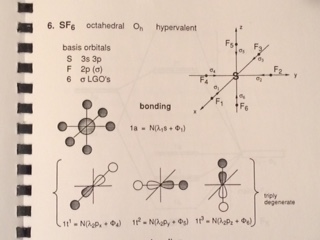 Now on to the second question: why is SF6 octahedral if it only makes a total of 4 bonds?

Given that there is a lot of negative charge on the ligands and positive charge on S, a simplistic representation is to make the atoms solid charged spheres. A simple electrostatic potential energy minimization would then lead to an octahedral arrangement of the ligand spheres around the sulfur sphere. That arrangement minimizes the repulsive interactions between the ligands and maximizes the attractive interaction between ligand and sulfur.

3
Breaking degeneracy in phosphorus pentachloride
0
Why do phosphorus and sulfur have variable valences?

3
IBrF2 - van der Waals repulsions - and number of unique bond angles
64
Why does F replace the axial bond in PCl5?
23
PBP vs TBP geometry?
8
Why an asymmetric geometry with sp3d and sp3d3 hybridization?
2
Bond length comparison in substituted phosphorus pentahalide