How to avoid oxidation of Si using a sub nanometer layer

Does anyone know how and which material to use to protect a Si layer from Oxidation by a small layer of thickness less than 1 nm ? (probably using atomic layer deposition) 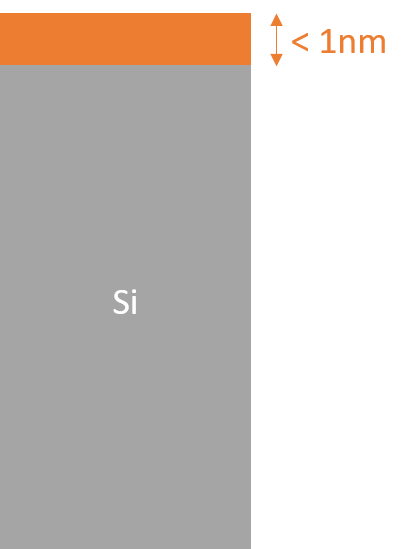 The principal role of silicon-fluorine bonds in the chemical nature of HF-etched Si surfaces has been investigated by angle-resolved X-ray photoelectron spectroscopy. The native oxide growth thickness and the fluorine coverage have been systematically measured as functions of HF concentration, pure water rinse time, air or N2+O2 gas exposure time and gas phase H2O concentration. It is shown that the native oxide growth is strongly suppressed by the existence of Si-F bonds of about 0.12 monolayers on the surface. This is explained by a model in which Si-F bonds chemically stabilize the surface reactive sites such as atomic steps as supported by the result of the layer-by-layer oxidation of Si.

(My bolding). I haven't read the full text, and I suspect that "strongly suppressed" really means that there was a very small amount of oxidation, rather than none at all. And note that while silicon surfaces may be stabilised by fluorination, scientists tend to get violently destabilised by the same reaction. This is a potentially hazardous process and not to be undertaken lightly.

In any case, "stability" really depends on what the surface is going to be exposed to. F-termination may oxidise only very slowly in air, but if you get water in there, it's a different story. In 1993 Jpn. J. Appl. Phys. 32 3125, Nakamura et al. write that:

So there may not be a "permanent" solution, just one that resists further oxidation for a while. What are you actually trying to achieve?

One other thing you could investigate is growing a self-assembled monolayer (SAM), probably on an H-terminated Si surface. It's been a while, but IIRC some pretty stable coatings can be generated that way. A SAM forest may offer a decent steric barrier to further reaction.

Not the answer you're looking for? Browse other questions tagged surface-chemistry or ask your own question.

3
Prediction of surface atoms in molecule from its graph
22
How does the silver nucleate on glass in Tollen's reagent mirroring?
2
Three general questions in silanization of a glass surface
1
Formation of a bubble which is not a sphere
9
Transition state optimisation on the surface of periclase
1
How fast a surface oxide layer is formed on bulk chromium?
3
What is the definition of porous materials?