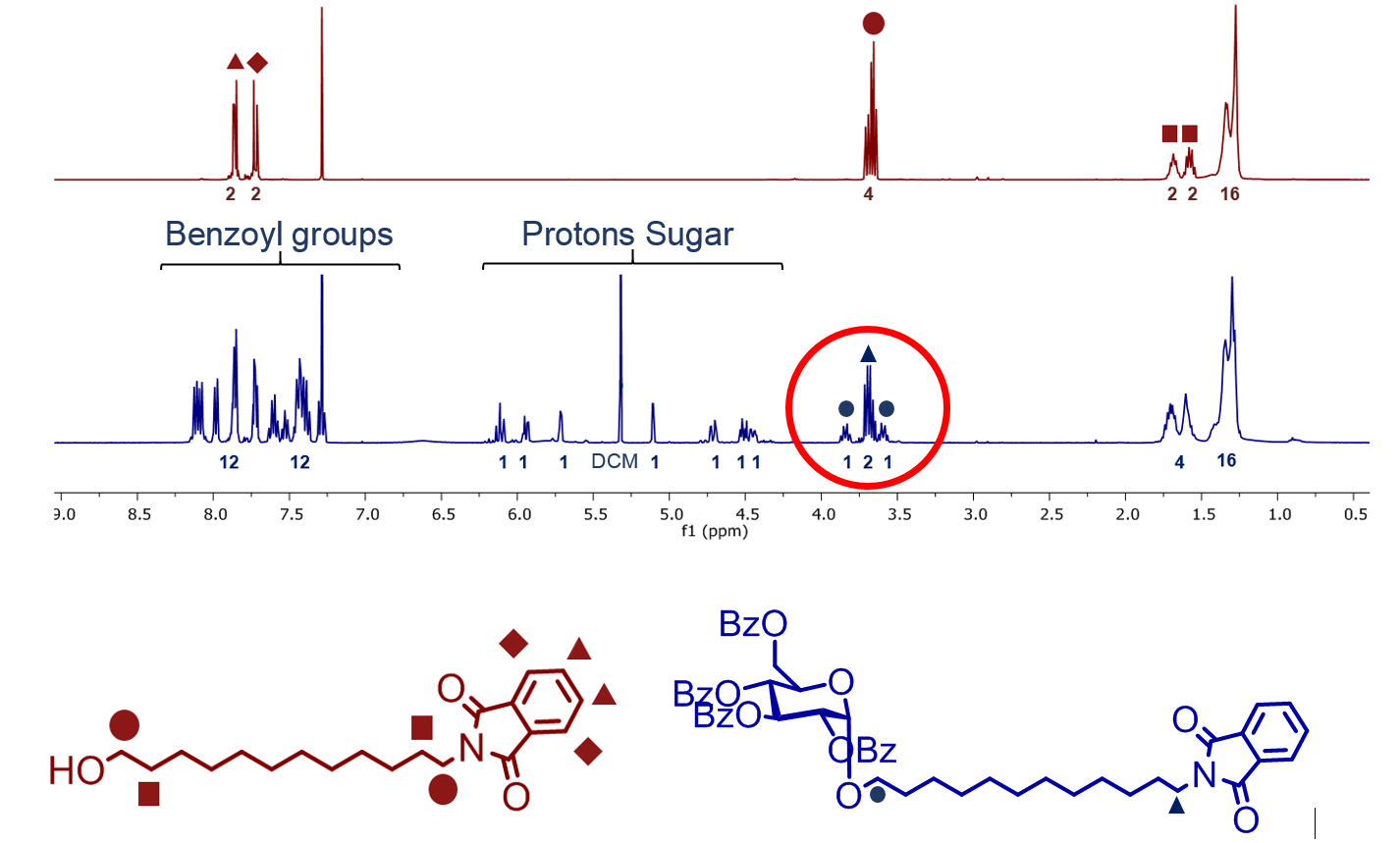 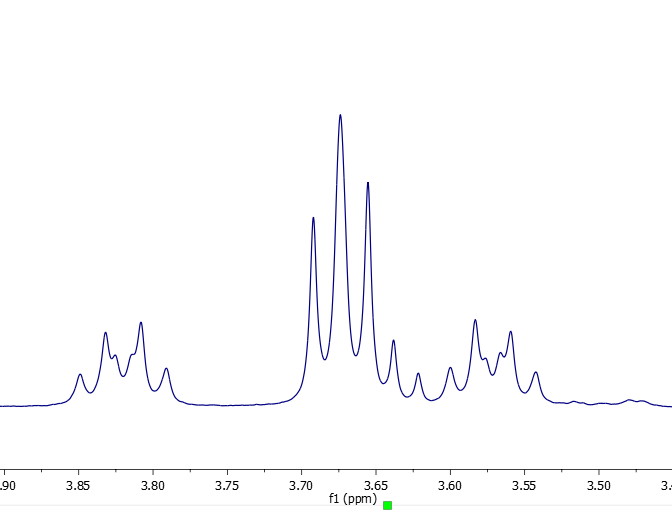 It seems like the CH2 next to the sugar gives two different NMR signals which is very interesting. Could someone explain me why?

Without the sugar, those two hydrogen atoms are enantiotopic, since substitution of those protons would lead to different enantiomers. Achiral measurements still will appear identical though.

Once the sugar is attached, the two hydrogens are diastereotopic, and are chemically and magnetically different. Especially so close to the chiral environment of the sugar, these two hydrogen see enough of a difference in their local environments that their shifts are different.

I would like to expand on Zhe's excellent explanation. The concept of why these hydrogens are in different environments is one that often befuddles people who are just learning about NMR spectroscopy. There is an example in the literature that I can no longer find in which the authors were unaware that the methylene hydrogens in diethyl α-methyl malonate were non-equivalent. [One of the co-authors won a Nobel Prize in Chemistry. So don't feel bad!] Imagine that you are chemistry's version of Maxwell's demon. You sit on the red hydrogen of ethyl bromide and look at the bonded carbon. What do you see? A clockwise (CW) environment in the Cahn-Ingold-Prelog (CIP) sense [Br>CH3>H]. When you sit on the blue hydrogen the environment is counterclockwise (CCW). Now you are more capable than an NMR spectrometer. You can distinguish between enantiotopic hydrogens. But the spectrometer can't tell the difference, the same result that was observed by the questioner. In a chiral environment, either by doctoring the sample with a chiral chelating species or by having a chiral environment proximate to the methylene group in question, a distinction can be made. Notice that the methylene group close to the glucose moiety displays diastereotopic hydrogens (circles) while the ones next to the phthalimide group (triangles) are not resolved in spite of the fact that they, and every methylene group in the chain, bear diastereotopic hydrogens! 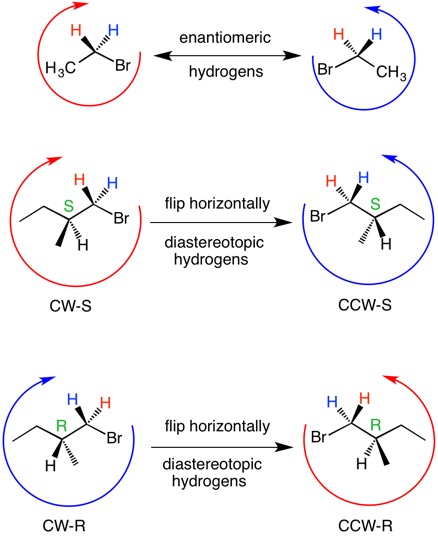 Now consider (S)-1-bromo-2-methylbutane (CW-S). Sitting on the red hydrogen you see the same order of substituents Br>C>H (CW) as on ethyl bromide but the carbon has an S-configuration. Now jump over to the blue hydrogen of the S-bromide. The local environment is CCW but C2 is still of the S-configuration. That is to say, CW-S and CWW-S have diastereotopic hydrogens! We can use the same arguments with the R-enantiomer where CW-R and CWW-R have diastereotopic hydrogens. The racemate displays the same diastereotopic hydrogens as do the enantiomers. Finally, the 400MHz NMR spectrum of cholesterol [http://sdbs.db.aist.go.jp/sdbs/cgi-bin/direct_frame_top.cgi] displays the two methyl groups at the end of its chain as separate diastereotopic groups separated by a mere 2 Hz even though there are three methylene groups between them and the nearest center of asymmetry. Resolution at low field is not to be expected but yet the hydrogens inherently remain different.

11
Why are all the phenyl protons in benzyl alcohol equivalent in the ¹H-NMR spectrum?
3
Why are signals of carbon and hydrogen atoms (in NMR spectra) split by coupling to 19F?
4
Why do we observe signal coalescence during dynamic NMR?
2
1H NMR of p-methoxy phenol, 32 possible lines?
9
How to separate two diastereomeric amines?
5
What is number of 1H NMR signals for toluene?
3
1H splitting pattern of benzyl CH2 protons
6
Why does the 31P{1H} NMR spectrum of cis-[Mo(CO)2(dppe)2] show two signals?
3
H-NMR with 10H integration?