In today’s reaction seminar, the Wharton transposition made an appearance. In our practice case it started from the epoxide as in scheme 1 below as on Wikipedia; Kürti/Czakó (page 482) begin from the enone which is oxidised by hydrogen peroxide to give the same epoxide.

Scheme 1: General mechanism of the Wharton olefin synthesis starting from an α,β-epoxy ketone to give the allylic alcohol.

The first steps are clear to me, I am interested in the mechanism of the final one. Our problem set’s solution key (taken from a Japanese book that I cannot reference for lack of understanding) draws a concerted [1,3] migration as depicted in scheme 2a. Kürti/Czakó depict a sequential release with an intermediate vinyl anion. Wikipedia makes no note on that step and does not discuss mechanistic proposals.

Kürti/Czakó also point out that:

Alternatively, the formation of a vinyl radical has been proposed.6

The concerted mechanism seems slightly unreasonable due to the strained four-membered ring that would be required in the transition state. Likewise, the stepwise mechanism requires the formation of a vinyl anion which — while possible — is generally not very stable. In its defence, the step would be rendered irreversible by the liberation of nitrogen gas and the subsequent anion immediately captured by any acidic proton around.

The Wharton rearrangement presents an opportunity to convert one α,β-unsaturated ketone to its regioisomeric allylic alcohol. To this end Ohloff, et al.,1,2 explored the transformation of α-ionone 1 into α-damascone 2. Epoxide 3 was exposed to hydrazine in methanol to afford bicyclic allylic alcohol 4 (30%) and the uncyclized allylic alcohols 5 and 6 (20%, ~1:1). The proposed mechanism (3 $\rightarrow$ 7 $\rightarrow$ 8 $\rightarrow$ 9) goes through the vinyldiazene 8, which loses nitrogen to form reactive species. Ohloff proposed a mechanism invoking the vinyl anion 9, which is either protonated by methanol to afford acyclic allylic alcohols 5 and 6 or undergoes cyclization with the endocyclic double bond followed protonation of the resultant secondary anion. The bothersome aspect of this mechanism is, can a vinyl anion in a sea of methanol survive long enough to avoid protonation and undergo cyclization? The same point can be raised about the traditional Wolff-Kishner reaction run at elevated temperature in protic ethylene glycol. 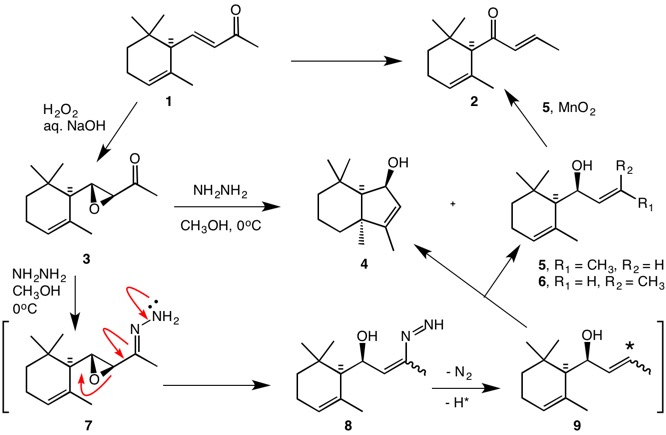 Stork and Williard3 explored the scope of the cyclization under Ohloff conditions finding that both 5- and 6-membered rings can be formed. Cyclization of epoxyketones 10a and 10b formed 11a (85%) and 11b (60%), respectively, as mixture of stereoisomers. In the former example, little of the uncyclized product was formed. These authors suggested a radical-based mechanism because in a typical reaction, the ratio of cyclized-to-uncyclization product was not markedly affected by employing the more acidic β,β,β-trifluoroethanol or the less acidic tert-butyl alcohol as a solvent. The authors argue that if a vinyl anion were involved, the more acidic solvent would be expected to increase the amount of uncyclized product at the expense of cyclized material. An intense yellow color developed which faded with time upon mixing the epoxide and hydrazine independent of whether or not cyclization occurred. A strong UV absorption at $\pu{232 nm}$ and a weak one at $\pu{409 nm}$ were attributed to the vinyldiazene. A concerted vinyldiazene cyclization was considered but with less enthusiasm.

Taber and Stachel4 designed a set of experiments to resolve this dichotomy based on the known stereochemistry of radical and anionic cyclizations. Tri-n-butylstannane-initiated cyclization of bromide 12a gave an excess of cis-cyclopentane 13a over trans-14a in accord with the cyclization of bromide 12b to 13b and 14b (13b>14b).5 Alternatively, metal-halogen exchange of iodide 15a with t-BuLi gave more of trans-cyclopentane 14a over the cis-isomer 13a in an anionic cyclization in accord with the results of Bailey6 for iodide 15b. The Wolff-Kishner reduction of ketone 16a in triethyleneglycol (TEG) afforded an 11:1 ratio of trans-14a over cis-13a. This result led the authors to conclude that the Wolff-Kishner cyclization is anionic as opposed to radical in nature. 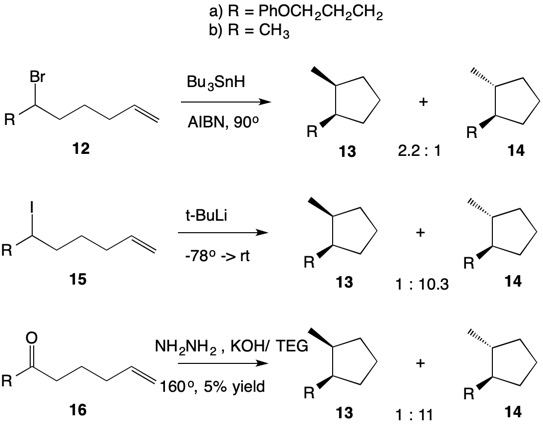 While it is not necessary that the Wharton rearrangement and the Wolff-Kishner reduction must proceed via the same mechanism, in my opinion there is ample opportunity for more definitive results. Should an occasion arise where only the radical or anionic mechanism would apply, then the definitive experiment has been conducted.

5
How is the hydrazone formed in the Wolff-Kishner reduction?

24
Which is the currently accepted mechanism of a Wittig reaction?
3
Malic acid 3-step synthesis
0
What is the mechanism of this pyrylium synthesis?
2
Which step is the rate determining step in Benzyne mechanism - Elimination or Addition?