How did they assign absolute configuration to these cis and trans 2-methylcyclohexanols? 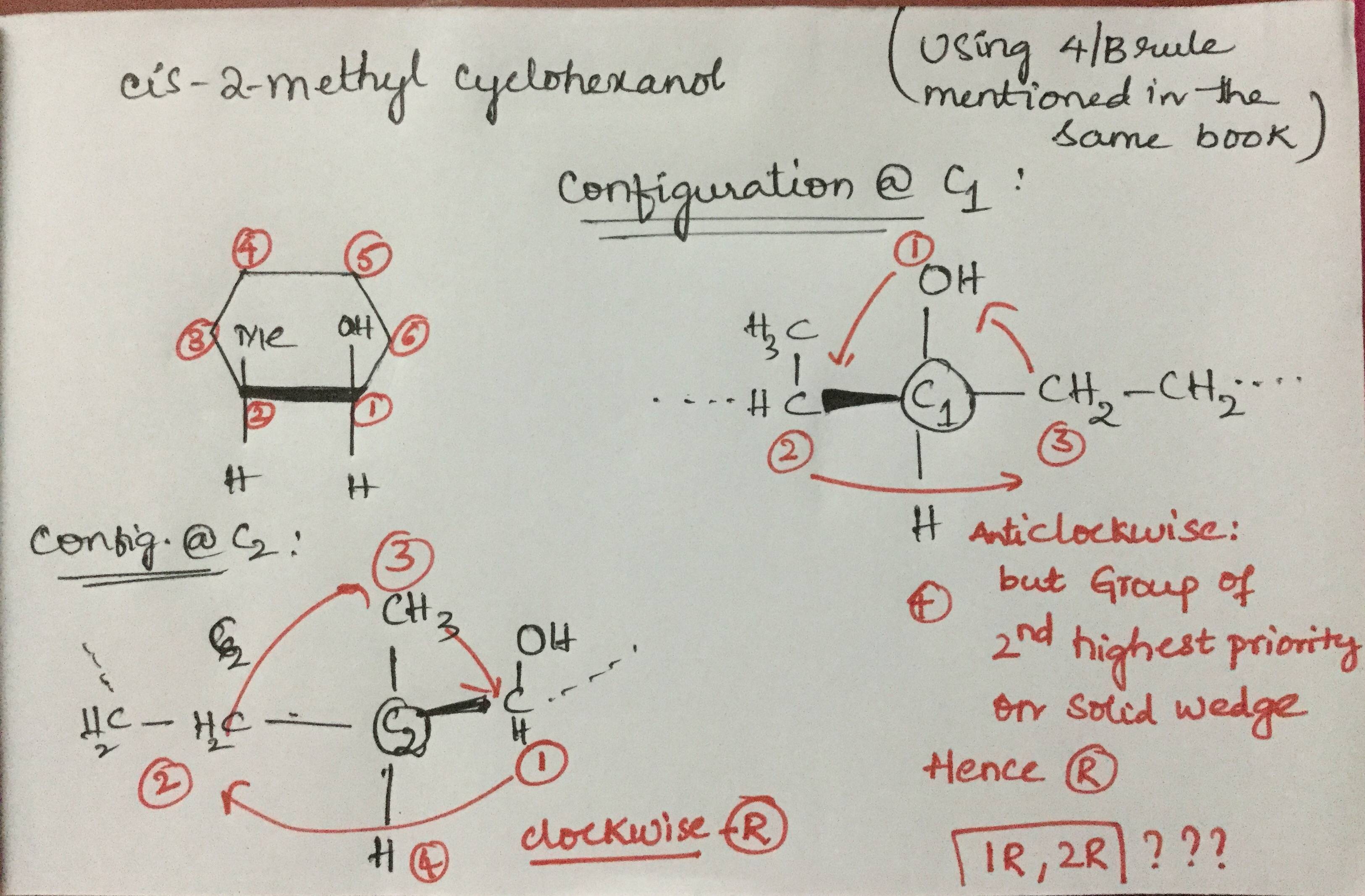 From [1, p. 56]:this is the 4/B rule I was talking about This is how I practiced. In the textbook, the absolute configuration of one of the enantiomers (I am referring to the the first compound) is written as 1R,2S. But when I tried to redo it, I arrived at 1R,2R. I didn't understand where I went wrong. I think the way I am visualising the compound is not correct.

Polysubstituted cyclanes, e.g., cyclopentanes, cyclohexanes etc. exist in a number of stereoisomers (diastereomers and enantiomers) depending on the number and nature of the substituents. The disubstituted cyclanes give two diastereomers which can be conveniently and unambiguously described as cis and trans isomers, e.g., cis- and trans-2-methylcyclohexanols (XXVII) and (XXVIII) (Figure 4.13). Each of the diastereomers in turn gives two enantiomers which can be named, following the R, S nomenclature, as R, S and S, R for the cis and S, S and R, R for the trans isomer (use 4/B rule) as shown in the Figure.

When I practice on this picture I always arrive at the same configuration both on C1 and C2. Am I assigning the priorities in a wrong way?

You have somehow decided that the front side of the ring is actually the rear side … or something. So your drawings show exactly the wrong stereochemistry. For the hydroxy-carbon, you thus would, in theory, get the incorrect assignment (S) but you use the rule you reference to reverse that into (R). Naturally, because your initial assertion of which atoms are in which plane was incorrect, your application of the rule was also incorrect. For the methyl carbon, your inverted ring reproducibly gives you the inverted assignment (R) and you do not apply any incorrect correction.

Figure 1: the molecule in question.

In figure 1, I have reproduced the molecule in the more ‘standard’ chair configuration which gives a better approximation of the bond angles. The wedged/bold portion of the ring is in front of the paper plane, the thin solid portion behind. I have also rotated the ring by $60°$ so that the hydroxy function is on the rightmost carbon atom for easier discussion.

It should be a rather simple exercise to determine that the hydroxy-carbon (carbon 1) indeed does have an (R) configuration: the hydroxy group has highest priority, the front side of the ring second-highest, the back side third and the hydrogen pointing downwards fourth. Therefore, we must look from above the ring plane to put the lowest substituent to the back; the rotation from hydroxy to methyl side to non-methyl side is thus clockwise, therefore (R).

The same analysis performed on carbon 2, the methylated one, should give you:

Note that the wedged and bold bonds — both in the paper’s drawing and in my figure — are not there to indicate a positioning from the stereocentre but to indicate which half of the ring is in front of the paper plane and which is behind. Thus, you cannot — like you did — assume the bolded bond to be in front; it actually is in your paper plane when you are looking at the two stereocentres on either side of it.

18
How do I determine the absolute configuration experimentally?
4
How do you change the cis-trans isomerism of compounds?
2
Cis and Trans Isomerism in Resonance-Stabilized Compounds
10
What is the difference between absolute and relative configuration in stereochemistry?
4
Cis and trans substituents on rings different stereodescriptors
10
Enolate formation and tosylate displacement in cis/trans decalin