How to tell between carbon powder or graphite powder?

I have a black powder that I cannot reliably tell just by looking or touching whether it is graphite powder or charcoal powder.

Are there any simple tests that I can perform to tell whether it is one or the other?

What I have tried:

I've also added a picture, if it helps: 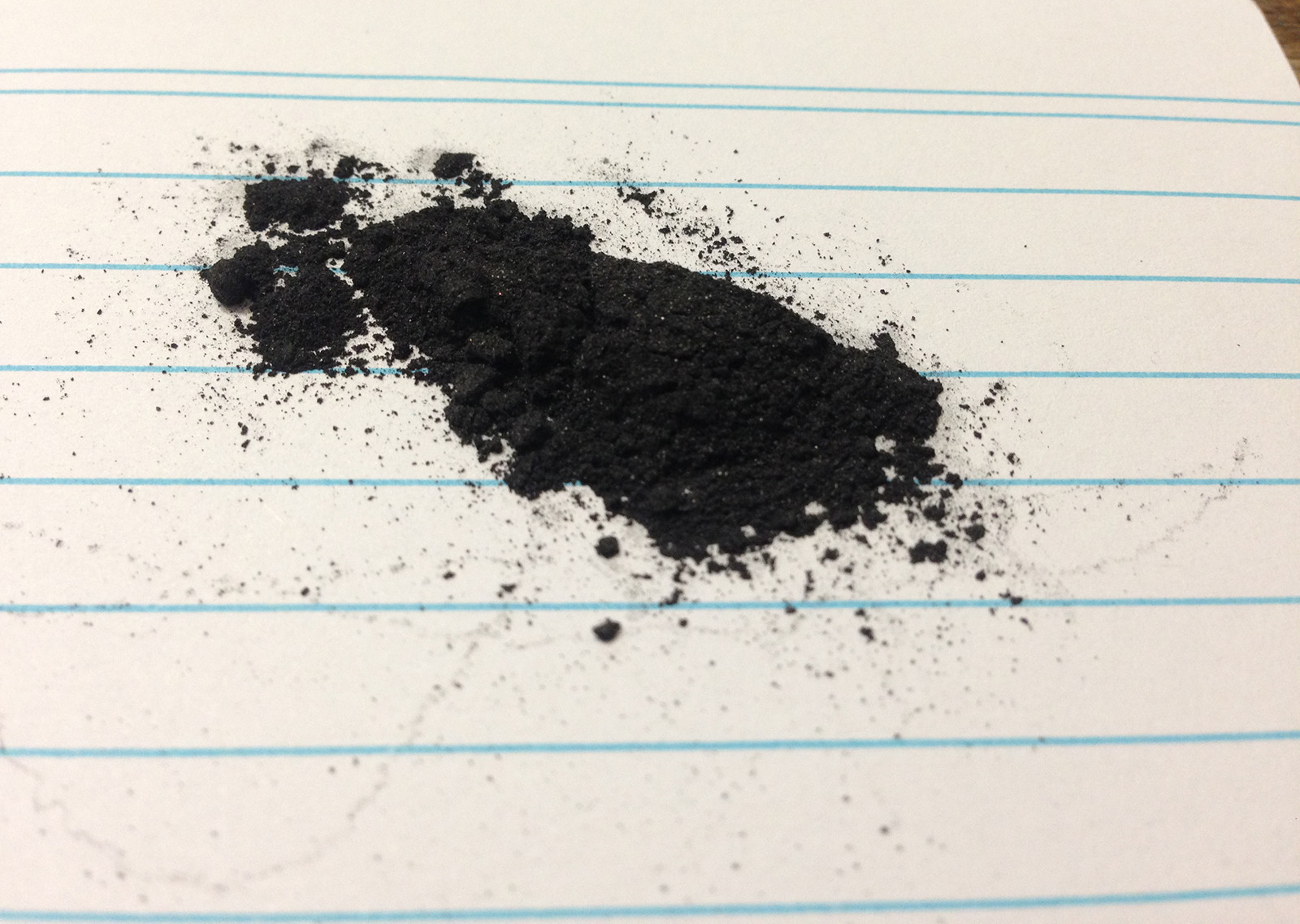 Ok, I've made a paste using isopropyl alcohol and the carbon powder and made a small "stick" or rod of the stuff. I have now been able to achieve solid continuity at around 2 centimeters in distance and the resistance dropped from the high 40 - 50 kOhms for the loose powder, to the low 10s (ie 40 Ohms). If this helps anyone. 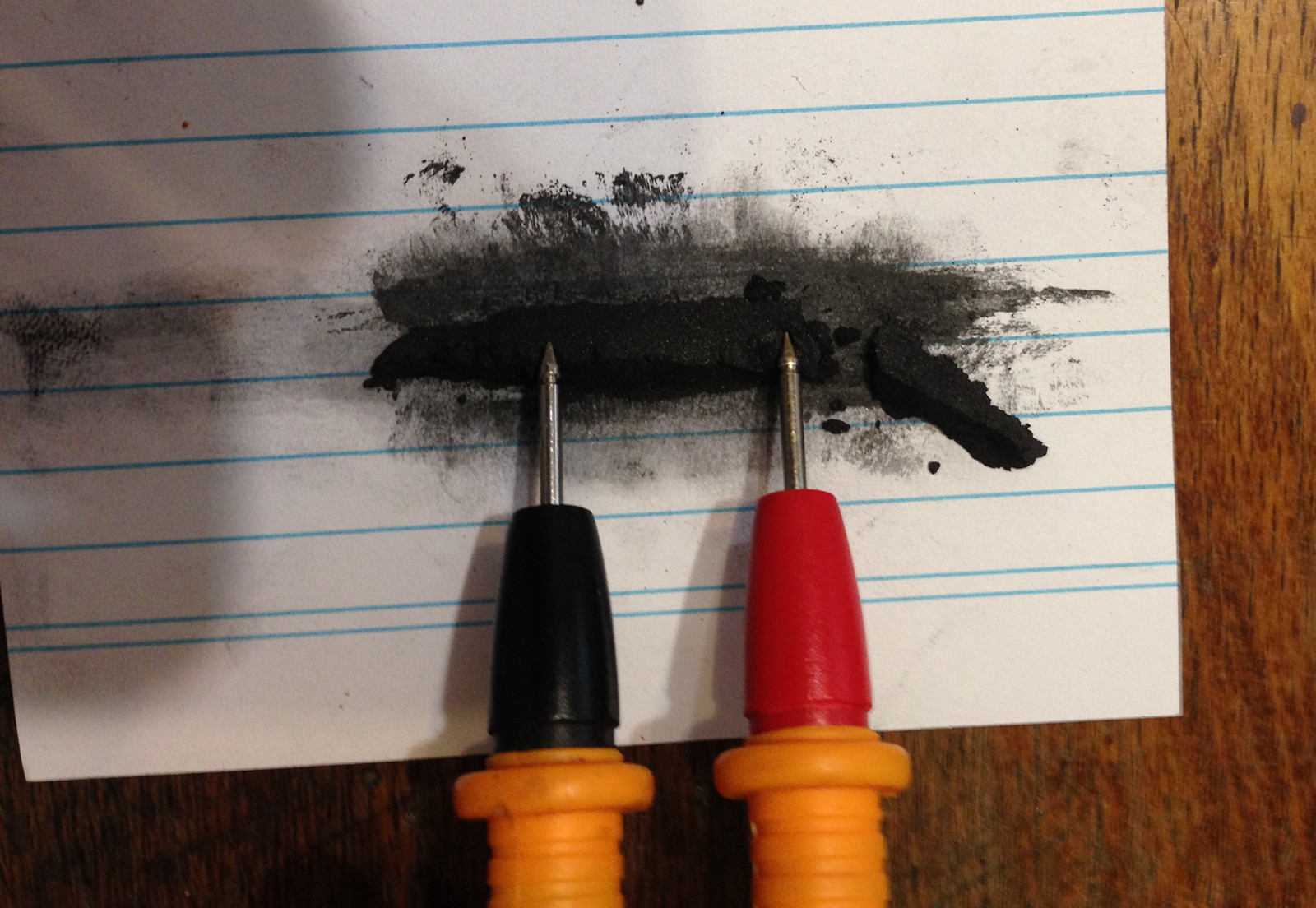 Short answer: You can't reliably tell the "difference" (by any simple means)

First of all, the graphite you were taught about at school is a pedagogical construct. Any macroscopic sample of "real" graphite would contain both the layered honeycomb (crystalline) bits as well as amorphous bits of carbon (in addition to God-knows-what bunch of other substances that managed to wiggle their way into your sample).

What about charcoal then? It's amorphous carbon with significant quantities of several kinds of organic compounds (you can't expect them all to decompose to carbon...), depending on the source.

Trying to class your sample (which clearly has other stuff in it... I can see white/gray specks on it in the first picture ;P) as "graphite" or "charcoal" is an effort in futility; neither "real" graphite nor charcoal have a sharply defined constitution.

Simple tests of the physical nature of the powder would not be able to accurately distinguish it from being "mostly graphite" or "mostly charcoal", mainly, because it's a powder. Had you had the sample before it was pulverized you could (easily) tell the difference; the qualities that most people attribute to graphite (luster, slippery-ness) aren't easily discernible when you turn it into a powder and then compare it with powdered charcoal.

About the tests you conducted:

Your attempt to subject the sample to various (physical) tests is laudable (more users ought to do that before posting "Identify this thingy"-type questions here... it may give us something to work with). However those tests, apart from sorely lacking in some sort of mechanism/procedure to cut down on sources of error, don't really provide any meaningful data that you or me or anyone could use to determine what your sample is (largely) composed of.

Let's break down what you did

The film isn't really a giveaway. Even particles denser than water are known to "float" in these circumstances... well, they aren't technically "floating", it's the surface tension of the water that's holding it up. This is easily disrupted by stirring/agitation, and as you've noticed, it'll sink.

Graphites typically have have a much higher density (slight variation depending on purity and crystal defects) than water, so pieces of "graphite" would sink.

Blocks of charcoal typically have lower densities (varies depending on type/source of charcoal) than water and hence floats, but that changes when you pulverize them (and destroy most of the air cavities in the process).

That was a lot of effort... for nothing (you have my deepest sympathies).

Okay, I think I see your reasoning here:

"Graphite's pretty conductive (low-ish resistance) and charcoal is a poor conductor (very high resistance), so doesn't this test tell me something?"

Thing about pure graphite (of the "Holy cow! A non-metal that conduct electricity!!!" fame) is that it only conducts (really well) along a particular plane; try another plane perpendicular to this and you'll find it to be a thousand times less conductive ( see answer to this question).

Even if your powder is (largely) graphite, surely the individual powder particles aren't going to align themselves into an extended plane between your terminals. They'll be oriented randomly, so expect the high resistance.

You first drew a line on a piece of paper using a pencil and measured its resistance to create a baseline to work up from. Smart. Just two things though:

Trying to figure out what your sample is by comparing its resistivity with that of another substance is a really neat idea, so don't get me wrong; the issue here is (1) the design of the experiment, (2) of the two substances you're trying to compare (graphite and charcoal), the latter's electrical properties are altered because it's been powdered and (3) your "control-test/sample" (the line-resistor) is neither graphite nor charcoal, making it a rather pointless "control sample".

Same argument as before: This test is pointless because your sample doesn't have fixed, uniform dimensions. Nor do the particles (if they're graphite; doesn't matter if it's charcoal) align themselves in extended planes.

As for the drop in resistance, I reckon it's because the sample isn't completely dry. The "isopropanol" you get at the drugstore is at least one-quarter water (not pure isopropanol). After you mixed it with your sample, a ton of electrolytes would've dissolved in the water (pretty sure your sample has loads of stuff that isn't carbon/ carbon-based). When you measured the resistance across this stick of yours, all that water hadn't evaporated by then. This is probably the (main) reason for the drop.

Interesting question by the way, you have my upvote ;)

The first thing I would try would be to tie a length of thread to the ceiling and attach a non-magnetic sample holder to the free end. Put your sample in the holder and see how much you can deflect it from vertical with a strong pyramid magnet such as https://supermagnetman.com/collections/neodymium/products/pyr1000n . (If it's inappropriate to link to vendor sites please feel free to edit this out.) Graphite is one of the more diamagnetic substances (although far short of superconductors), so it should deflect more than an equivalent mass of charcoal. For comparison you could get some pyrolytic graphite, a 1 in X 1 in X 6 mm block is about $50 I think, break (or cleave) a little chunk off and grind it up so you would have a good graphite standard for comparison. They are fun toys to have around and worth it not just for the sake of this experiment.

15
Edges of graphite
4
What's the difference between graphite, nanotubes, and fullerenes?
3
How do I separate graphite powder from light oil?
9
Is the valency of carbon satisfied in graphite?
3
Difference between baking soda and baking powder
4
Producing carbon nanotubes from graphite
5
Is turning graphite carbon into diamond industrially doable?
0
How is graphite a covalent solid?
7
Why is graphite brittle?
0
Making carbon powder using fireplace and weak acid