Why is decomposition of ammonia gas on quartz a 1st order reaction?

In general, decomposition of a gas (like ammonia) on a metal surface (like platinum) is a zero order reaction. This is because the gas is adsorbed on the metal surface due to pressure and the initial concentration is immaterial. But, why and HOW does it behave differently with quartz?

Firstly a correction and general clarification: your first general assertion is not true. The metal surface acts as a heterogenous catalysts (supported by paper linked later), and the kinetics can be sufficiently modeled by the Langmuir-Hinshelwood model for a monomolecular reaction in which the rate determining step is the surface reaction

$\theta_A$ is the surface coverage of A. Applying the steady state approximation to $\theta_A$ over the adsoprtion, desorption and reaction steps and using the Langmuir adsorption model gives

so the rate is given by

where $\bar{k}$ is a complex rate constant. For low partial pressures of A, the reaction thus approximately follows first order kinetics and zeroth order for high $p_A$. Here is a nice paper verifying this for several metals.

Now lets get to the quartz. The authors of the paper also mention a possible bimolecular reaction mechanism, of which the key step is the formation of hydrazin from two adsorbed ammonia molecules. They disregard this mechanism due to experimental evidence, but lets apply some metal organic chemistry here.

$\ce{NH3}$ is a great $\sigma$ donor, so a $\sigma$ acidic metal center will happily bond. A simplistic view might be that the nonbonding lone pair is being donated to the metal - taking a look at a MO diagram of $\ce{NH3}$ you will however find that the HOMO (from which we donate) is slightly bonding. 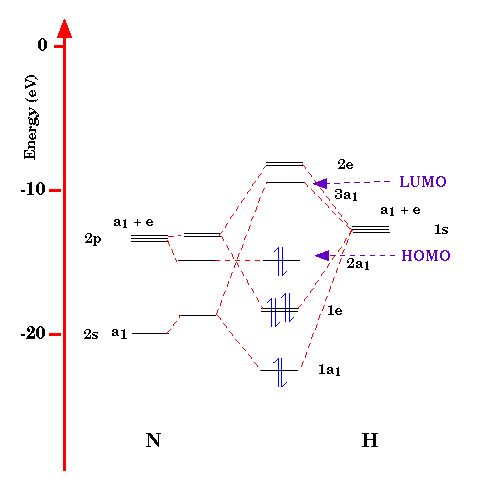 Therefore, this particular $\sigma$ donation will decrease N-H bond strength, which supports the monomolecular reaction mechanism for such a surface (this does put us somewhere in the grey zone between heterogenous and homogenous catalysis).

$\ce{SiO2}$ is not a substance that comes to mind when we are looking for a $\sigma$ acid. So maybe, under these conditions the bimolecular mechanism becomes the preferred pathway. Bimolecular reaction kinetics of this sort can be modeled by Langmuir-Hinshelwood (both reacting species adsorbed) or Eley Rideal (one adsorbed, one in gas phase). Langmuir-Hinshelwood would give us the boundary cases of second order rate at low $p_A$ and zeroth order at high $p_A$, and I could find no experimental results supporting that anywhere. An Eley-Rideal model would give us a rate law of the form

which would give us first order behaviour for high partial pressures of ammonia! Here is a paper finding experimental data supporting this kinetic model. Possibly the reaction product in the rate-determining step is not hydrazin, but an intermediate hydrazinium which then decomposes.

It thus seems plausible that ammmonia decomposition on a quartz surface follows a bimolecular Eley-Rideal mechanism, compared to the monomolecular mechanism on a metal surface - as a result of the different interactions between surface and adsorbent.

Not the answer you're looking for? Browse other questions tagged inorganic-chemistry kinetics or ask your own question.