How to deal with exact numbers on error propagation?

In Analytical Chemistry, 7th edition by Christian et al., in its Example 3.10 (screenshot below; see blue circle for the main matter), when it computed for the standard deviation after getting the average of the three measurements, the authors further divided the standard deviation by 3 to get its absolute uncertainty. 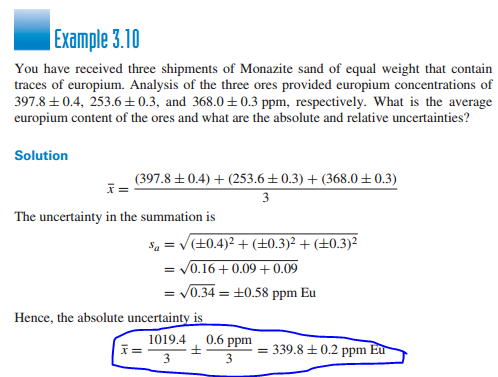 However in its Example 3.12 (screenshot below; see blue circle for the main matter) it did not divide further the calculated standard deviation by 100 to get the absolute uncertainty, even though it's essentially the same operation as in Example 3.10. In addition, you can see in the price calculation near the end of the solution that he multiplied it too to the standard deviation to get the absolute uncertainty. 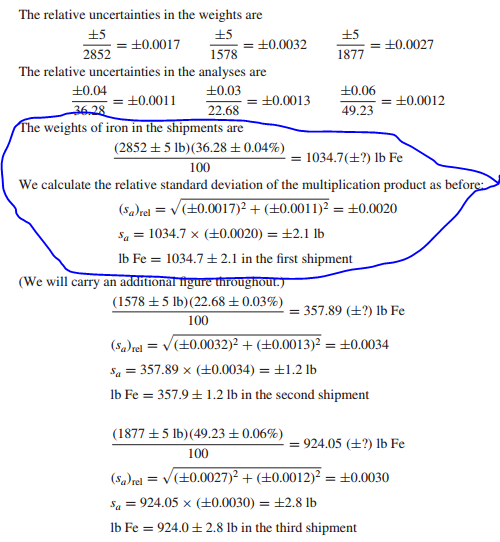 Of the two, which is the correct action for the error when dividing or multiplying with an exact number? If they're both wrong, or if they're both right and I'm just misinterpreting the concept, what is, then, the proper way to deal with this situation?

On the other hand, what should I do with the error when adding/subtracting a measured number from an exact number or vice-versa?

Browse other questions tagged analytical-chemistry or ask your own question.

2
How are samples prepared for analysis with ICP-OES? Can it analyse gases?
0
Estimating magnitude of percentage and absolute error
2
How to calculate the detection limit?
3
Calibration Curve Error Propagation
4
Error propagation Titration
2
How can I estimate how much humidity is present in a NaOH granulate?
0
How many samples would be worth when following a desorption? How to relate with limit of detection?
2
How can one determine an atomic mass with high accuracy using gravimetric analysis?