Is it possible for Cytosine and Hypoxantine to make three hydrogen bonds? 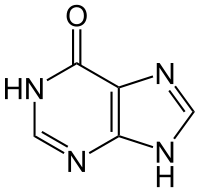 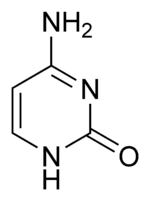 I strongly believe that it won't be possible for these compounds to form three hydrogen bonds.

Revisiting the basic definition of a hydrogen bond:

Such electronegative atoms as oxygen and nitrogen with free lone pairs are potential hydrogen bond acceptors.

These two crucial requirements for hydrogen bond formation, have thus been summarised:

Here is an impression of how these two would bond: 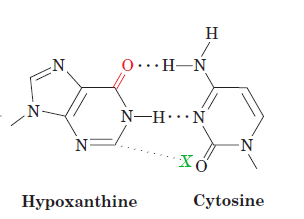 There is evidence for C-H...O and C-H...N hydrogen bonds, see e.g. the book by Desiraju and Steiner 1. These bonds are much weaker than conventional hydrogen bonds. Also, in general, hydrogen bond strength depends on the distance and the angle of donors and acceptors. In the given case, the hydrogen and oxygen atoms you are asking about are to far apart, and the atoms Y-H X (with Y the electronegative bonding partner of the hydrogen, H the bound hydrogen and X in acceptor) are not arranged in a line, which would be optimal.

Not the answer you're looking for? Browse other questions tagged bond biochemistry hydrogen-bond or ask your own question.

2
Atomic coordinates for DNA bases as they appear in a B-form or A-form duplex
4
Predicting 260/280 of DNA or RNA from sequence?
6
How many hydrogen bonds in these compounds?
0
Strength of substituted Carbon Double Bonds and C-halo bonds
2
Can glutamic acid and arginine form H-bond at physiological pH?
3
Polysaccharides from non-cyclic sugars?
1
Complementary base pairing