What is the difference between autocatalysis and self-replication in terms of chemical terminology?

I want to know does any difference between the meaning of autocatalysis and self-replication exist in modern chemical terminology?

E.g. I want to know can both terms be used interchangeably for entities requiring the presence of themselves in a reaction environment to catalyze the formation of themselves or is there any experimentally conceivable differences between molecules capable of autocatalysis and the self-replication of entities (therefore the category includes both molecules and larger complexes of molecules) in terms of the science of chemistry?

I want to know is the definition of autocatysis versus self-replication a problem of clarification of definitions-e.g. a problem of philosophy or is there any real-world experimentally identifiable difference between the 2 process in terms of chemistry?

The two terms represent very distinct concepts and are everything but interchangable.

Autocatalysis means that the product of a reaction catalyses the same reaction. But there is no focus on the catalysed reaction being exactly that or only that product catalysing it. As an example, take acidic ester hydrolysis e.g. with ethyl acetate:

This is a reaction catalysed by acids that produces an acid in its course. This acid increases the solution’s overall acidity and thus catalyses the reaction that created it. But this feature is in on way specific to the acid we have generated. For one, we might as well add sulphuric acid to the reaction mixture to generate the same catalytic effect. For two, the acid produced in this reaction would also catalyse the hydrolysis of methyl formate. So neither is a specific structure required for catalysis nor is the catalysis restricted to itself.

Self-replication again means that a product is able to catalyse its own formation but only its own formation. The catalysis must be specific to a certain (set of) reactant to produce a certain (set of) product. Similar but different compounds bearing the same functional groups should not be able to effectively catalyse the reaction in question and the reaction product should not be able to catalyse any other reaction equally efficiently.

Typically, self-replication is achieved by having the product molecule act as a template which brings two reactive moieties closer together and allows for a more efficient reaction to itself. For example, you might consider the trimeric complex shown in the figure below: 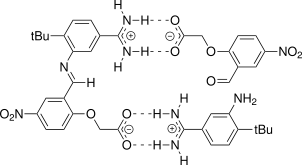 Figure 1: Self-replicating system as described by Terford and von Kiedrowski[1]

Here, the amine and the aldehyde shown on the right-hand half of the figure can condense to form an imine. This process can, of course, be catalysed by acids or bases. However, the condensation product shown on the left-hand half of the figure is able to form hydrogen bonds to the two compounds in such a selective way that the reactive moieties are brought close together. This eases the creation of the imine because the amino group is already in the perfect position of attack.

The imine product is therefore able to catalyse its own formation by templating but not the formation of closely related systems; and there is no other compound or functional group that would have an equally good catalytic effect on the reactants. This is not just autocatalysis but also self-replication.