Why are phosphonate-stabilised ylides used in HWE reaction more nucleophilic than phosphonium ylids used in Wittig reaction? Explanations without rationalisations using d orbitals would be welcome.

It might not be the only factor, but I think that the steric effect of the huge phenyl groups in Wittig ylides might contribute in making them less nucleophile. If you give a fast look at a "space filling" model of the two molecules, you see that the negatively charged carbon in a Wittig Ylide is much more masked by the phenyl groups 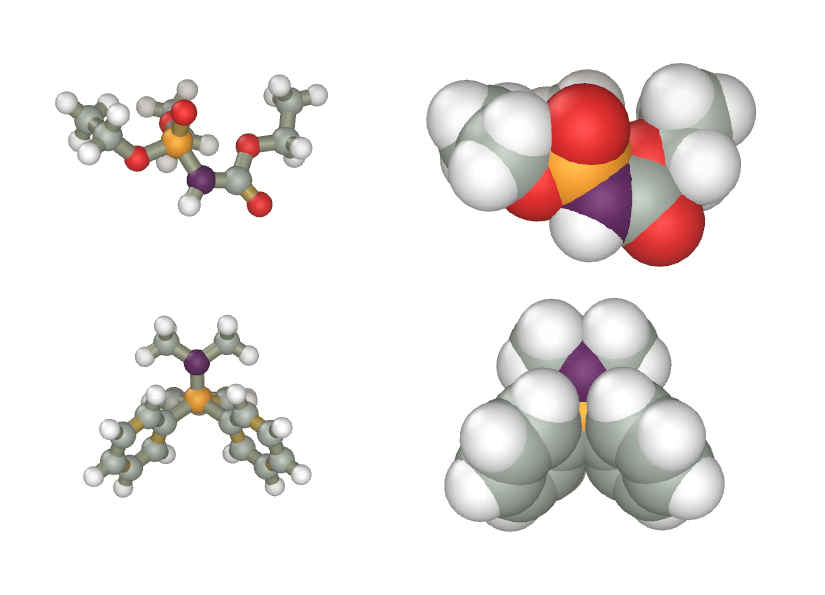 Note that in order for a nucleophile-electrophile interaction to occur, an electrophile should approach to the carbanion's HOMO orbital (approximatively orthogonal to the screen in both the pictures).

Not the answer you're looking for? Browse other questions tagged organic-chemistry wittig-reactions or ask your own question.

24
Which is the currently accepted mechanism of a Wittig reaction?
31
Why does the unstabilised Wittig reaction selectively form cis alkenes?
8
Does the synthesis of beta-keto phosphonates from esters have a name?

3
Inductive effects of halogens
8
Competitive 'Wittig' vs 'Peterson' C=C bond formation
2
Are alkynes more electrophilic than alkenes?
12
Wittig versus Corey–Chaykovsky reaction
0
Why does neighbouring group participation increase the rate of reaction?
7
Why do stabilised ylids lead to trans alkenes in the Wittig reaction?
2
Order of Nucleophilicity
1
Properties of stilbene isomers