Which diagram shows the effect of catalysis on chemical equilibrium? 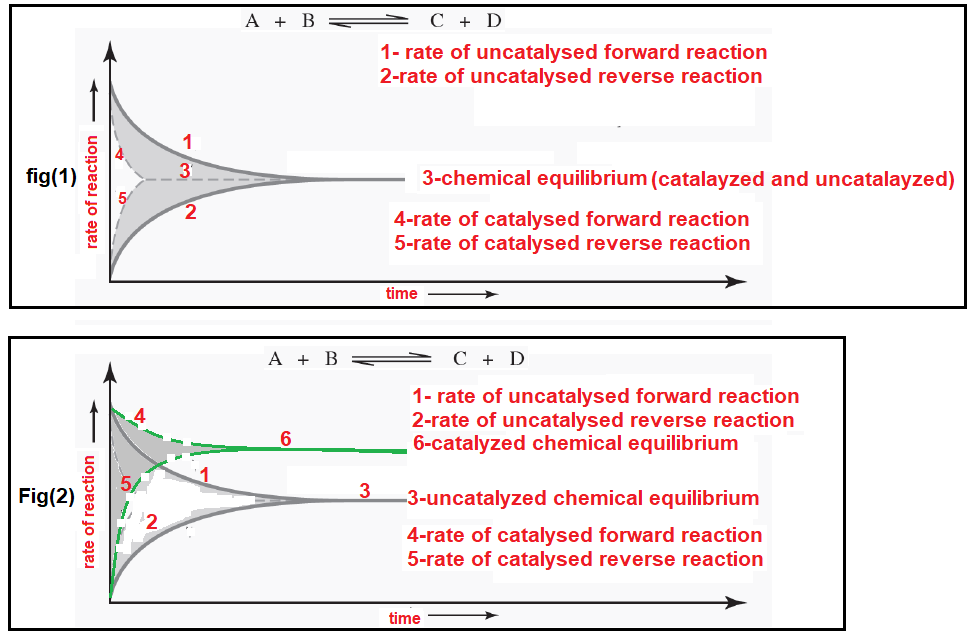 When reviewing the diagram in figure (1), I observe the following mistakes:

I need feed back about the diagram or both are wrong and about my reasoning.

Your Figure 2 is correct if we want the y-axis to represent a rate-of-conversion instead, i.e., if the upper curve is "number of parcels of $\mathrm{A+B}$ being converted to $\mathrm{C+D}$ per second", and the lower curve is vice-versa. As you point out, a catalyst increases the conversion rate, and does so in both directions. So, exactly as you have drawn in Figure 2, those catalyzed rate curves should both be higher than their uncatalyzed siblings.

To know the exact diagram represent the effect of catalysis on chemical equilibrium, I searched on experimental data but I can't find suitable data. so I consider a hypothetical reversible first -order reaction in each direction where $$\ce{ A <=> B}$$ I choose those two equations for reversible first- order reaction to calculate the concentrations of product and reactant at a different time: $$\ce{[A]}=\frac{k_b +K_fe^{-(k_f+k_b)t} }{k_f+k_b}{[A]_0}$$

I did the calculation using excel sheet and draw the graph of concentration Vs time :

Figure 1 shows the rate as $k_f [A][B]$ whereas Figure 2 shows only $k_f$. This is why Figure 1 has the equilibrium at the same rate for the 4 reactions.

Not the answer you're looking for? Browse other questions tagged physical-chemistry equilibrium kinetics catalysis or ask your own question.