Are electrons in a helium atom diametrically opposite? [closed]

The helium atom is represented with electron opposite on same orbital: 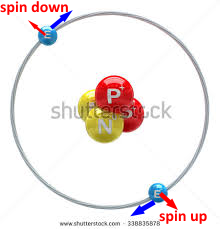 not fully opposite on same orbital and even on two normal orbitals: 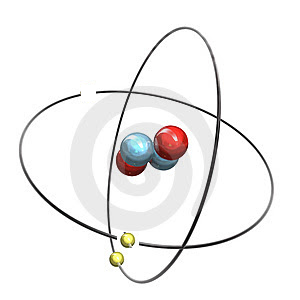 But in this case wouldn't the electron crash?

Can you please specify if their real position is known, and if it is not, what is the most plausible solution?

Also, we know from Pauli's principle that they must have different spin: but isn't in that case the electron with spin up behaving like a positron or a proton? How is that possible?

Throughout your question it is clear that you are considering electrons as particles. This is not entirely incorrect; for example, the cathode ray tube is best explained by electrons being considered negatively charged particles that can travel through vacuum and be deflected by (electro)magnetic fields. However, particles as small as electrons can also be considered waves as is evident by electron diffraction. The probably most frequently cited connection between the particle nature and the wave nature of electrons and others is the de Broglie wavelength given by equation $(1)$.

This discovery earned de Broglie a Nobel Prize for the theory and Thompson and Davisson for the supporting diffraction experiments.

Quantum mechanics is the underlying theory that attempts to shed light into how electrons and other microscopic particles behave according to their wave nature. The key principle is that each particle is described by a wave function, typically labelled $\Psi$, dependent on space and/or time coordinates. A key part of the theory is the existence of operators which can be applied to the wave function to observe observables — physical parameters such as a particle’s energy or magnetic moment. Operators and observables observe the Schrödinger equation $(2)$ in which the Hamiltonian operator $\hat H$ can be replaced by any other operator to observe a different observable than energy $E$. Naturally, the wave function may be a different one depending on the operator in question.

Using this equation alongside the derivation of the correct Hamiltonian, the wave function for a singly negatively charged particle rotating and translating freely in a spherical electric field of a given positive charge can be determined. This long and tangled sentence boils down to: we can calculate the wave function of an electron in the vicinity of a nucleus. The nice thing is that the electron’s energy is quantitised and dependent only on the principal quantum number $n$ while other quantum numbers are also required to fully describe the wave function ($l, m_l, s, m_s$). The quantisation of the electron’s energy provides a nice and succinct explanation of the hydrogen spectral lines.

Unfortunately, it is not possible to solve the Hamiltonian for two electrons. The energy of a single electron consists of its kinetic energy (described with the $\hat T$ operator) and its potential energy towards the nucleus ($\hat V_\ce{el-nuc}$). If a second electron is introduced, we now need to consider electron-electron repulsion potential ($\hat V_\ce{el-el}$) which we cannot solve. (In my quantum mechanics lecture, the professor gave the impression that this is a problem proven to be unsolvable but I don’t recall seeing any proof.) Therefore, we cannot calculate the wave functions of the two electrons of a helium atom a priori. However, multiple computer-assisted calculation algorithms exist that allow us to come close.

Whatever the actual solution, the key is that electrons in an atom or molecule should primarily be considered waves, not particles. Their wave function contains the spin orientation quantum number $m_s$ which can be either $+\frac 12$ or $-\frac12$, depending on whether the electron is spin up or spin down. These two wave functions basically operate the same space at the same time. Yet the electrons do not collide because we are dealing with waves, not particles.

You considered the electron with opposite spin to be a positron. That is not correct. A positron has the opposite charge with respect to an electron ($\ce{e+}$). Spin and charge are, however, two different properties. Spin is probably best considered a magnetic moment that would arise if a charged particle were to rotate around itself. However, this macroscopic picture is not fully valid; no macroscopic pictures you draw of microscopic particles are.

Finally, note that all particles are subject to the uncertainty principle. This means that we cannot determine the position of an electron accurately since it would imply maximum uncertainty with respect to impuls. Likewise, we cannot accurately determine an electrons impuls. And another complicating matter is the observer effect: by attempting to observe where an electron is (approximately) we have to influence the system so strongly that it is no longer what we wanted to observe. This is because even very small energies have a significant effect on small scales.

Your notion of electron particles is not fully supported by the currently accepted (and experimentally validated) theory. Rather, think of them as waves. Waves can interfere but cannot collide. Furthermore, since the wave function does not give a location, we cannot accurately determine the location of an electron.

Not the answer you're looking for? Browse other questions tagged orbitals atoms spin or ask your own question.

22
Why are atoms with eight electrons in the outer shell extremely stable?
7
Total magnetic moment of atom
1
How many electrons can each shell in an atom hold?
2
Why are atom spherical in shape ?
32
When is it true that more nodes equals higher energy?
1
Are electron orbitals in a helium atom degenerate?
1
Consequences of a neutron decay (beta radiation) and reasoning for an electron capture
0
Which electron is knocked off a Helium atom?
3
Methylene “anti” Jahn-Teller effect