October's synthesis golf is rather late - apologies. I've chosen a slightly different-looking target this round, with the aim of inspiring a wider variety of routes.

The only conditions for this round are that:

Otherwise, any commercially available starting material (as usual, in the Sigma–Aldrich catalogue) is fair game! There is also no restriction on the counterion.

This proposed route relies on being able to make the tetrahydrofuran via some type of ring closing etherification.

Through disconnection of the C-O bond, a linear diol is revealed which may be accessed in several ways.

Initially, I'd thought about doing a Sharpless dihydroxylation of (Z)-hex-1,4-diene, however the starting material is surprisingly expensive and there are few literature reports of doing this dihydroxylation (and in those instances where it has been carried out, the e.e. and regioselectivity has been moderate to poor).

A different disconnection, using the chiral pool (less elegant, perhaps, but the starting material is cheap and ensures good selectivity) allowsthe diol can be disconnected across the C-C bond, revealing an aldehyde which is derived from a lactate ester. 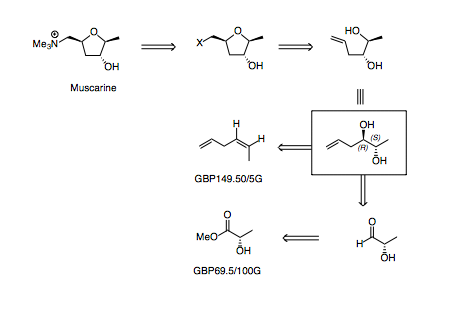 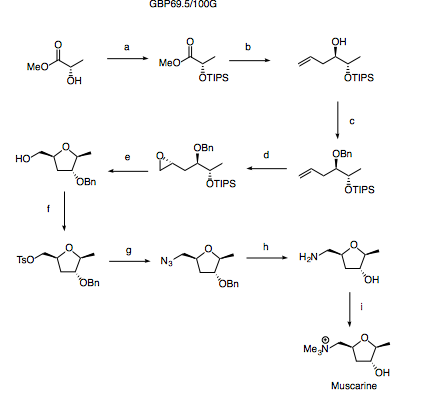 The synthesis starts with protection of methyl lactate with a TIPS group - a silyl group is chosen here as upon deprotection under fluoride conditions later in the synthesis, the THF should spontaneously close.

The TIPS protected methyl lactate may then be treated with DIBAL to afford the lactaldehyde. This must be used immediately to prevent epimerisation. In all likelihood, this could be achieved by adding a solution of allyl magnesium bromide to the same pot as the DIBAL reduction but failing this, there is good precedence for a reagent controlled boron mediated allylation (Tet. Lett. 2003, 44, 1737).

The terminal olefin installed by allylation is now setup to do a Shi epoxidation (Sharpless is terrible at terminal olefins) providing the final stereocentre. Treatment of the substrate with HF-Py should then deprotect the TIPS ether with concomitant formation of the THF ring system.

Finally, functional group transformations provide the desired natural product as shown in the scheme. Some issues may be observed when attempting to methylate the amine in the presence of the alcohol however from experience of similar substrates, the amine is likely to quaternise faster than the alcohol methylates and as such careful control of stoichiometry and conditions should allow the desired product to be isolated as the major component.

A synthesis of muscarine is proposed in 9 steps (linear) starting from methyl lactate, with the remaining stereocentres being installed using a substrate controlled allylation and a reagent controlled asymmetric epoxidation.

Addition steps could likely be cut out by (1) not protecting the alcohol that is currently protected with a benzyl group and (2) making use of an asymmetric aziridination in place of the Shi epoxidation.

Allylation of ethyl acetate should provide the unsaturated ester. Sharpless asymmetric dihydroxylation should proceed with the formation of the lactone. The free alcohol was then tosylated, substituted with azide and the azide was reduced by Straudinger procedure and the obtained amine was protected with Bn group. Davis hydroxylation should be reagent controlled to give the hydroxyl group with the correct stereochemistry. Tebbe olefination, was followed by OH-directed hydrogenation and Bn deprotection. Selective methylation of the amino group should provide the target molecule. 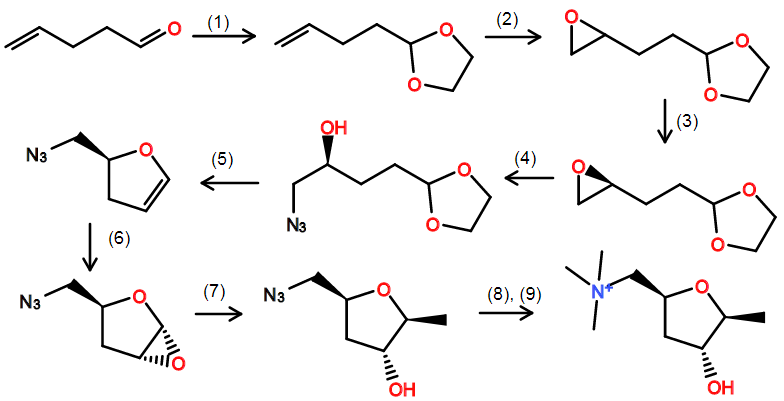