How does the addition of acetone cause a shift from hexaaquacobalt(II) to tetrachloridocobaltate(II)?

For this reaction, at equilibrium,

When acetone is then added, the solution changes from red to blue. What causes this?

I haven't tried this before but it sounds interesting. As the blue chloro-complex is in an equilibrium with the red aqua-complex, I'd suggest the equilibrium is shifted as the water is absorbed by the acetone. As water and acetone are miscible this may take some water from the equilibrium, causing the shift towards the chloro side.

If you use ethanol to dissolve the anhydrous $\ce{CoCl2}$ it will turn blue as well. Yutaka Fukuda mentioned a chloro-ethanol-complex in his book 'Inorganic Chromotropism' for acetone I doubt it will coordinate.

Therefore I'd rather tend to the first one.

for a species X

We need to understand that as the composition of the solvent changes or the temperture changes the activity coefficents will change.

By lowering the relative dielectric constant you will make the coordination of the anions to the cations more favourable. I think that this is the reason why a solution of cobalt chloride in ethanol/water is thermochromic. It is pink when cold and blue when hot.

The replacement of the water with a less coordinating solvent will also help to shift the equilibrium in favour of the blue tetrachloro anionic complex.

The extended Debye-Huckel equation in its full glory is

I have done the calculations for the activity coefficient of chloride in mixtures of water and acetone for a 500 μM solution of cobalt(II) chloride at 298 K in mixtures of water and acetone. As the acetone replaces the water the activity coefficient of the chloride goes down, I think that this will be due to the electrostatic interactions of the chloride anions with the cobalt cations (ion pairing): 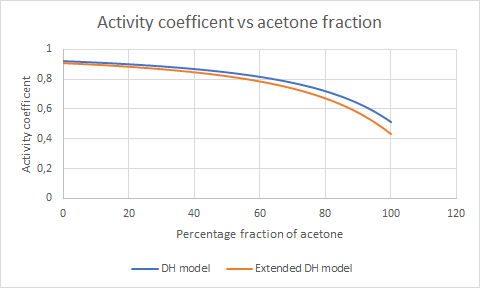 Now if we consider the equation

Now if $K_\mathrm{eq}$ is a constant regardless of the solvent system, then as

Then if we have a new equation which is

If we multiply "random greek symbol" with $K_\mathrm{eq}$' we will get a new equilibrium constant for the system.

We can get a new equilibrium constant $K$ (solvent composition) which we can plot against the fraction of the solvent mixture which is acetone. Here we have the graph.

Here K' is the true equilibrium constant which would be for a system in water with a zero concentration of cobalt chloride.

We can see as the acetone content increases that the cobalt cations are more likely to react with the chloride anions to form $\ce{CoCl4}$ dianions than they are in the aqueous system. 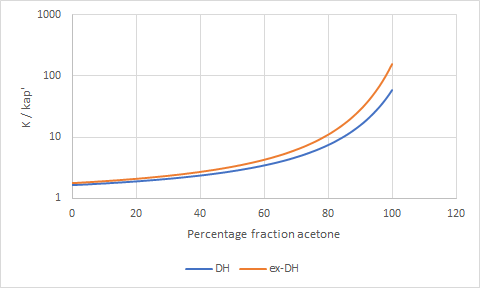 If you read the papers by people like Bromley[3]The Journal of Chemical Thermodynamics 1972, 4 (5), 669–673. who clearly expresses the ideas of Guggenheim you will find a specific ion interaction term in the activity coefficient equation (Bromley equation). I am sure that the value of the specific ion interaction constant for cobalt and chloride will increase as the water is replaced with acetone.

Sadly I very much doubt if the constants for water/acetone mixtures exist, most of the research effort has gone into aqueous only systems. You could make a lot of the measurements by doing UV/vis spectroscopy on solutions of chloride salts in acetone/water mixtures. But it will be a complex problem, I know that while sodium chloride is a strong electrolyte in water it is a weak one in acetone. I know a classic reaction in organic chemistry for the formation of alkyl iodides is to treat an alkyl bromide or alkyl chloride with sodium iodide in acetone. The larger anion size makes sodium iodide more soluble (and a stronger electroyte) in acetone than sodium chloride/sodium bromide.

If you look at the supporting information for [1], you will see at the end an example of thermochromism. Here mixtures of water, cobalt chloride and the lactic acid / choline chloride eutectic are shown both hot and cold.

This effect has also been reported with nickel chloride in deep eutectic solvents made from choline chloride by some chemists in China. Similar effects were seen for nickel by [2]. They have observed thermochromism which I think is due to a change in the coordination chemistry which in turn is induced by the temperature induced change in relative dielectric constant.

1
What reaction takes place when potassium iodide is added to a tetraammine copper(II) complex?
1
Colour changes in coordination complexes
4
Does the mixture of a ligand exchange reaction contain all the complexes obtained in the part reactions?